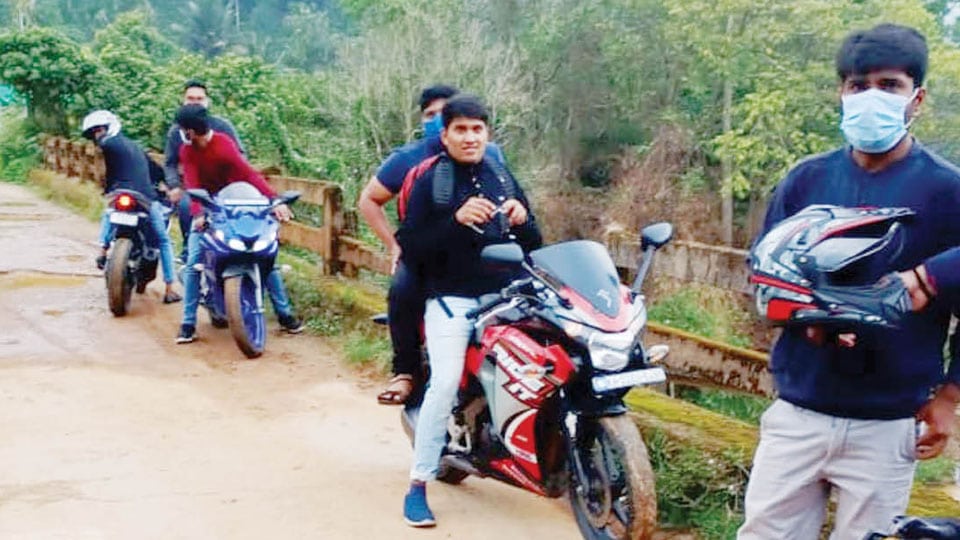 Kushalnagar: Six students of Kodagu Institute of Medical Sciences (KIMS) have landed in trouble for violating COVID-induced lockdown by roaming around on a pleasure trip and entering a village near Kaloor, a landslide-prone area. As a punishment, they have been put to duty for one week at Madikeri District Hospital.

The students, a couple of days back had entered Devastur village near Kaloor in their bikes and none of them were wearing masks. They entered the village early in the morning for a picnic and were revving up their bike engines, making loud sound. However, they were questioned by the villagers who are wary of outside visitors for the fear of virus being spread. Asked who they were and the students replied that they were KIMS students and had come for a short trip.

The villagers tried to put some sense into them and asked them being medical students don’t they have any responsibility towards the District that is reeling under the pandemic. The students argued with the villagers and even insulted them, it is learnt. The villagers video-recorded the incident and even took photos and circulated in social media questioning their behaviour during a time of crisis.

Villagers later complained to Madikeri Tahsildar Mahesh and produced the video evidence. The villagers told him that the students stopped their misdemeanour only when the videos were shot. Some of them also wore masks after villagers reprimanded them.

Dean Dr. Cariappa told Star of Mysore this morning that the students had ventured into the village before attending their regular classes. “Yes, warning has been issued and they are doing their penal duty at District Hospital,” he said.