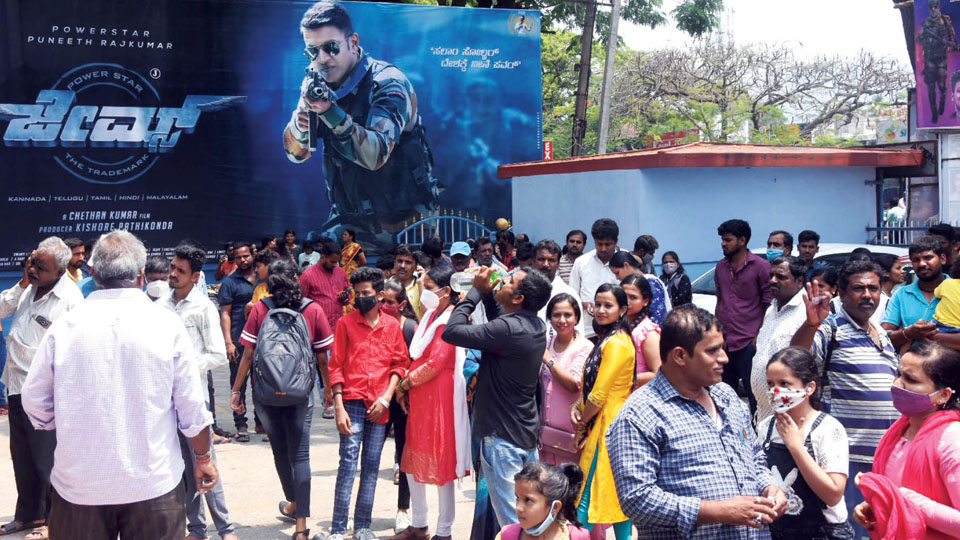 Mysore/Mysuru: The release of Dr. Puneeth Rajkumar’s last Kannada movie ‘James’ and Vivek Agnihotri’s Hindi film ‘The Kashmir Files’ has buoyed the business of cinemas to its pre-pandemic levels, with theatres and multiplexes increasing the number of daily shows to accommodate the soaring demand for the movies.

After over two years of no shows, all theatres in the city are screening the latest super-hit movies along with other movies that opened at the box office last week. But ‘James’ and ‘The Kashmir Files’ are major hits and there is a scramble for both online and offline tickets.

Theatre-goers told Star of Mysore that they are not getting places to park their vehicles.

Giving a medical analogy for the latest trend, Gayathri Talkies owner M.R. Rajaram, who is also the Vice-President of Karnataka Film Exhibitors Federation, told Star of Mysore: “All the theatres were in the ICU for two years and now it is like receiving double-dose vaccinations and also a booster dose. It is like infusing fresh blood to a human body. We are happy that crowds are back and people are feeling safe.”

‘James’ is running to jam-packed shows and it was released in five city theatres as soon as it opened on the first day, Mar. 17. “It was screened in Gayathri Talkies, Sangam, Rajkamal, Thibbadevi and Woodlands. Apart from single screen theatres, multiplexes including DRC Cinemas, PVR Cinemas, Inox and Mysuru Vision Cinemas are also seeing packed halls.

As per the agreement reached, ‘James’ was screened in all the five theatres for one week and now Gayathri Talkies and Sangam are screening it. We were forced to hike the ticket rates to Rs. 150 and Rs. 200 due to mounting losses but still people are coming. This is unexpected and heartening,” he said.

Other theatre operators said that the number of shows had gone up and the movies managed a rare feat — attracting more crowds on weekdays instead of the normal weekends.  Audiences are eager to be among the first to rush to theatres to catch the films on the silver screen, they said.

“The movies have surpassed all other films that are currently playing at the cinemas. This has proved that good content always attracts crowds and the response is overwhelming,” DRC Cinemas’ Proprietor C.R. Hanumanth and his wife Vaishali Hanumanth said. “Yes, the start was slow but now we can confidently say that we are back at pre-pandemic levels. People are feeling safe with vaccination and booster doses and both the movies are being screened inside housefull halls,” they said.