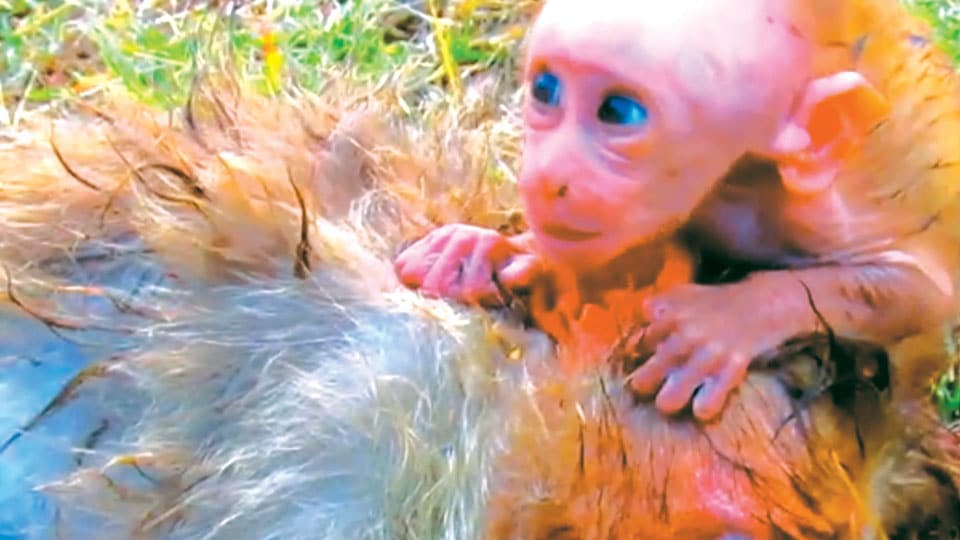 Mysore/Mysuru: A video of a baby Bonnet Macaque wailing near its mother’s dead body in Bandipur Tiger Reserve has gone viral. The video was shot recently near the Melukamanahalli Gate of the Tiger Reserve where an unidentified speeding vehicle ran over the Bonnet Macaque.

Speaking to Star of Mysore, Abdul Shez, who shot the video, said that the baby Macaque refused to move away from its mother’s blood-soaked dead body without realising that its mother has been killed by a speeding vehicle. “It was a heart-rending sight to see the baby screeching. It did not even allow people near its mother,” he said.

Many roadkills are reported every day and most of the times, small reptiles, monkeys and even big cats are killed while crossing the road from one side of the forest to other. Nearly 3,500 vehicles pass through Bandipur en route Ooty per day during the weekends and a majority of the motorists ignore the speed limit and rip through the jungles.

The highway in question here is NH 766, previously NH 212 that connects Kollegal in Karnataka and Kozhikode in Kerala via Mysuru and Gundlupet and Sulthan Batheri and Kalpetta in the Wayanad district of Kerala. It bifurcates at Gundlupet with NH 766 proceeding to Kerala and NH 67 connecting Gundlupet to Ooty in Tamil Nadu.

About 24.5 km of this highway slices through the core of the Bandipur Tiger Reserve which is a critical tiger habitat and an important migration path for large mammals in the reserve.

Traffic is at present banned inside Bandipur Tiger Reserve from 9 pm to 6 am and this was enforced in 2009 by the then Mysuru Deputy Commissioner. Kerala has opposed the night ban and has repeatedly approached the Supreme Court saying that the ban has hampered the State’s business activities. Even the Apex Court has ruled that Karnataka’s move was right in the interests of protecting the environment. Still, the neighbouring State has not stopped exerting its influence on the Centre from time to time to lift the ban.

Karnataka Forest Department, environment activists and the National Tiger Conservation Authority have pointed out in the Court that after the ban has been imposed, the number of roadkills has reduced. “At present, however, as the number of vehicles traversing on the Highway has increased during the day time, the net gain of reducing road kills by introducing a ban on night traffic is gradually neutralised owing to repeated road kills during day time,” environmentalists said.

“Many road kills go unnoticed as they are small animals. There have been instances of leopards and tigers getting crushed under the wheels. There is an urgent need for the Forest Department to increase vigil on the stretch. The present road humps are useless as many vehicles pick up speed within seconds after crossing the road humps. CCTV cameras must be fixed to identify the killer vehicles so that they can be fined for causing the road kill,” environment activists said.

Such cameras have been installed in Australia where they can take long-distance shots while the images are clear. Forest Department should put speed breakers every 500 metres. Check posts at both entry and exit points should compulsorily check the vehicle and give pass tokens. Further, time limits should be given for the passage of vehicles, they add.