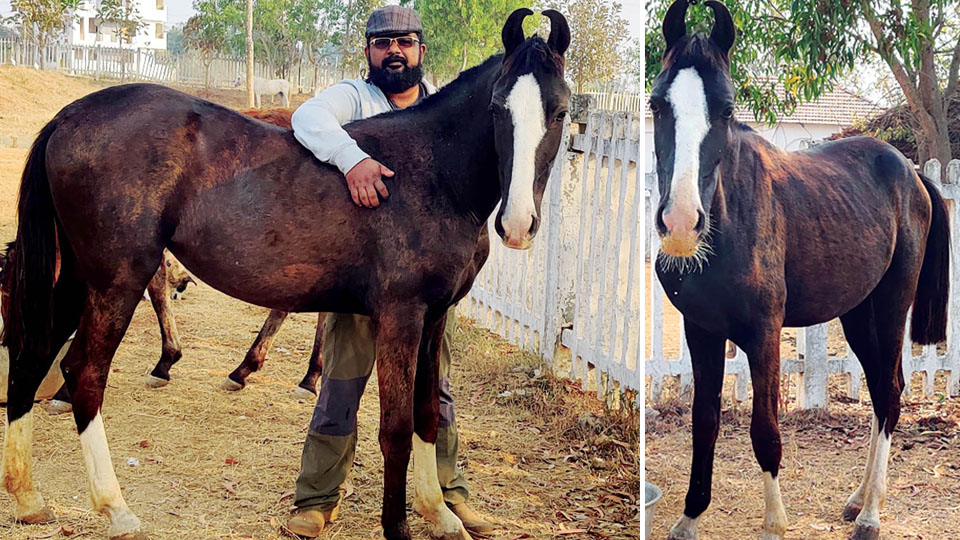 Mysore/Mysuru: The one-year-old female horse that had gone missing from a Stud Farm in city on Jan. 25 has been returned to its rightful owner after 22 days. The horse belongs to rare Marwari breed that is one of the few indigenous breeds left in the country and was worth Rs. 5 lakh.

The horse was found tied to the gate of the Stud Farm early this morning. The breeder had lodged a complaint with Alanahalli Police about the missing horse and had even advertised that a reward of Rs. 25,000 would be given to whoever finds the horse. Star of Mysore had published a report on the missing horse on Feb. 6.

The Stud Farm is owned by breeder Riju Varghese at Sardar Vallabhbhai Patel Nagar. An elated Riju told SOM that the publication of the news and the Police complaint forced the person who stole the horse to return it. “They had cut the mane of my horse so that identification is difficult. Also, the horse has gone weak without proper food, exercise and nutrition supplements,” he said.

In his Police complaint, Riju had mentioned the name of a former employee of his Stud Farm as the prime suspect. “This guy had stolen a few puppies from my farm sometime back. After stealing the puppies, he had gone back to his native place in Bihar and he called me two days back and I had asked him to return the puppies and the horse,” he said.

“He is an aspiring jockey and I told him that this theft would lead him nowhere except jail and his jockeying career would be spoilt. Though he denied that he stole the horse, I found the animal tied in front of my Stud Farm gate this morning,” Riju said.

Though the horse is worth Rs. 5 lakh, it cannot be sold for that price without ‘horse passport’, a documentation that allows horses to be accurately identified, sold and more easily be transported from one place to another. Without the passport, there is not much value for the breed and a                                   Rs. 5 lakh worth horse can be sold at Rs. 1 lakh or so.

“The 15-page passport traces the lineage of the breed, parents and its grandparents. My horse is sired by ‘Dilshan’, India’s famous and beautiful Marwari stallion. All these have been documented in the passport and my horse could not have been sold for its original price without my knowledge and to the knowledge of Marwari Association,” he said.

Riju said that he was planning to take his horse to the Marwari show in Coimbatore on Feb. 28. “Now the horse is weak and not in a position to be displayed at the show. It has to be fed properly and brought back to its original form and it will take time,” he opined. The Police compliant will stay. “I will not withdraw the complaint as the crime has occurred. Let the Police take action,” he said.