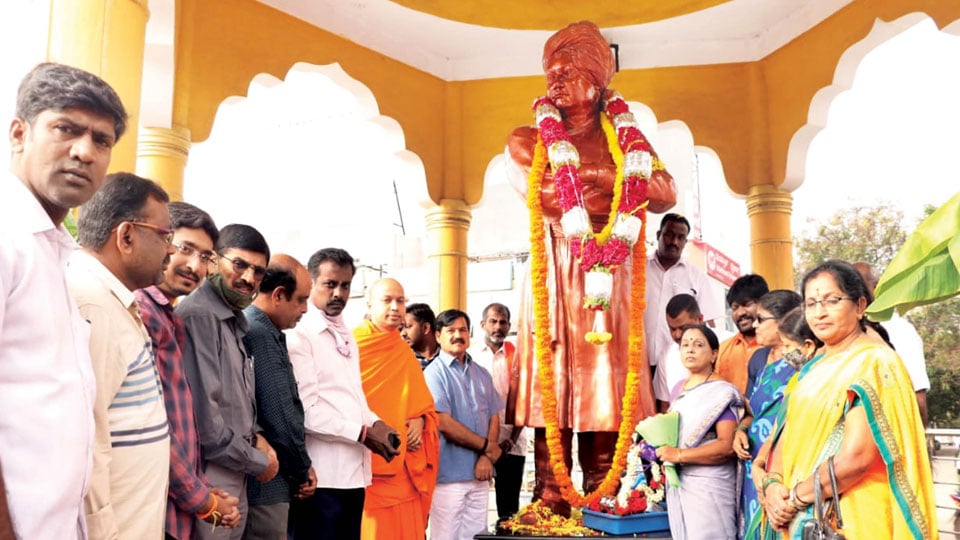 At a function organised at Mahajana First College, Dr. B.S. Manjunathswamy, Additional Deputy Commissioner, called upon the youths to develop the habit of questioning as it was panacea to many problems being faced by the country.

He said Swami Vivekananda has been an idol for crores of Indians but they have failed to emulate him especially questioning. The youths must not accept anything without questioning but unfortunately the attitude was missing in the current generation.

Swami Shanthivrathanandaji Maharaj of Sri Ramakrishna Ashram asked youths to question themselves what they have contributed for the country than they question what nation has done for them. Swami Vivekananda had said ‘My life is my work’ to encourage the young Indians to contribute to nation in their own way. Responsibility on the youths was to make India from developing to developed nation, he added.

A mega blood donation camp was held under the aegis of Youth Hostels Association of India (YHAI) and Jeevadhara Blood Bank at YHAI premises in Gokulam II Stage in which YHAI State President Y.S. Purushotham participated.

Speaking on the occasion, Ravikumar of YHAI Mysuru Unit, said they had been holding blood donation camp on Vivekananda’s birth anniversary every year. This year, students were not taking part in it due to COVID-19. Despite this, they have managed to arrange at least 60-70 units of blood. Since there is no alternative to blood, more and more people should come forward to donate blood to save lives, he said.

Girish, Director, Jeevadhara Blood Bank, said as per new circular issued by Karnataka State Blood Transmission Centre,  people in the age group of 18 years to 60 years can donate blood  but depending upon their health condition. Earlier, persons, above 58 years were not allowed to donate blood. “Our aim is to make Mysuru district as ‘no blood shortage district,” he added.

Speaking on the occasion, he said Swami Vivekananda introduced India’s rich culture in foreign land nearly a century ago and became an icon among the youths. The monk travelled across the country to create awareness among the young mind. He grew under Sri Ramakrishna Paramahamsa and Sharada Mathe. Need of the hour was to tell about life and achievements of the young monk.

Ashok, Director, MYMUL, said Hinduism has been the foundation for all religions around the world and India has been a seat of philosophy and spirituality.