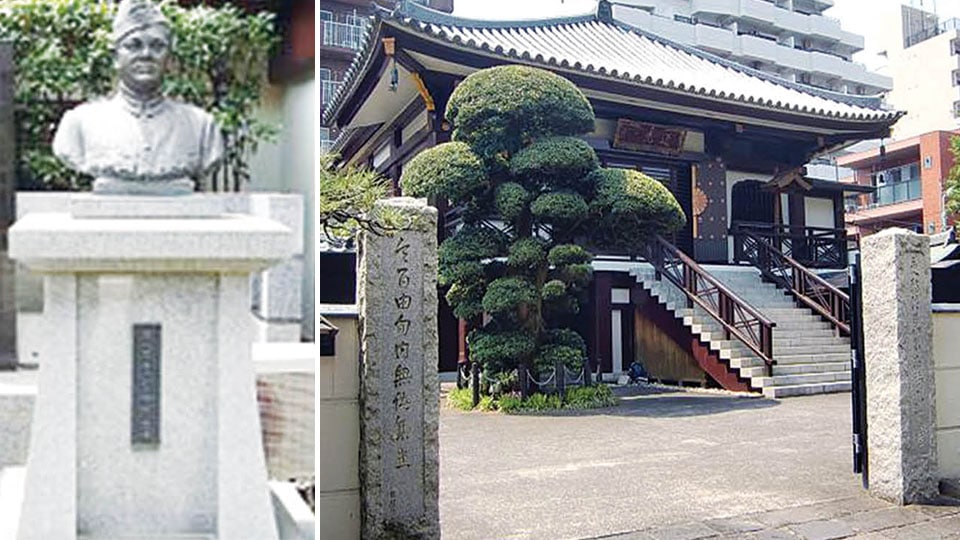 The Rotary Journey: To S. Korea and Japan – 6

An accidental Memorial for Netaji Subhas Chandra Bose in Tokyo

The world is a book and those who do not travel read only one page.” —St. Augustine

When I decided to go to Japan for the second time with my Rotary friends, I had one special interest — that was to pay a visit to the Memorial of Netaji Subhas Chandra Bose in Tokyo. Of course, another reason was my wife’s desire to visit Japan. So I decided to fulfill these two important desires on my second visit.

However, as it often happens, visit to Netaji Memorial was not included in the itinerary. But on the second day at Tokyo, we decided to visit the Memorial first before visiting other places. As we know there is a controversy raging among the hero-worshippers of Netaji surrounding his death and the place of his death.

Surprisingly, many of his supporters, specially from Bengal, refused to believe either the fact or the circumstances of his death. As could be expected, conspiracy theories and even fake news began to float in the air and they still continue to float…

Subhas Chandra Bose died between 9 and 10 pm local time on Saturday, 18th August, 1945, aged 48. According to reports his body was cremated in the crematorium two days later on 20th August 1945. However, his death was announced on 23rd August 1945. On 7th September 1945, a Japanese Officer Lieutenant Tatsuo Hayashida carried his ashes to Tokyo and the ashes were handed over to the President of the Tokyo Indian Independence League, Rama Murti. After holding a memorial service for Bose in Tokyo, the ashes were handed over to the priest of the Renkoji Temple of Nichiren Buddhism in Tokyo where they have remained ever since and it was where we paid our visit.

The Renkoji is the Buddhist temple in Tokyo by the side of a narrow road in downtown area. The small well-preserved temple was established in 1594. Looking at the building, I wondered, if it could be true or it must have been renovated or reconstructed a few times in the past 425 years. Japanese must be given credit for maintaining such an old building in a condition that does not make it look older than a 100 years. When we went there the weather was cloudy, wet and rainy. So a few of us used the umbrella to move around the clustered and narrow area (see picture).

As you enter the gate you right away see the bust of Netaji in his typical INA (Indian National Army founded by him) uniform. Behind the pedestal is the building where we were told is housed a Museum displaying Netaji’s personal possessions and artefacts. For our bad luck, we could not see the urn carrying the ashes of Netaji as the Museum was closed.

Because of the controversy, the Government of India had constituted G.D. Khosla Commission in 1970. The Commission found that the ashes of Subhas Chandra Bose were placed in the box at Taipei after the cremation of his body. From there, the box containing the ashes was brought to this temple for the purpose of funeral ceremony and the Chief Monk agreed to keep the box of ashes in the temple in safe custody.

According to our guide, who honestly said she did not know about Netaji and that it is a tourist destination for Indians. However, she revealed that on enquiries she found the Netaji’s associates still surviving in Japan observe his death anniversary on August 18 at this place annually. On further enquiry I learnt from the neighbourhood people that many Indian officials and politicians who travel to Japan visit this Renkoji Buddhist Temple, to pay their respects to the Nationalist leader, which keeps his remains.

On checking, I discovered among the dignitaries who visited this hallowed place include the first Prime Minister of India Jawaharlal Nehru. He was said to be the first dignitary to visit the place in October 1957. He was followed by President Dr. Rajendra Prasad, Prime Ministers Indira Gandhi and Atal Bihari Vajpayee who had visited twice. Among the ordinary mortals from India to visit this sanctified Buddhist Temple were the members of the Rotary Mysore, including yours truly. I left the place wondering why Government of India could not get it back to Netaji’s motherland.

For the record, the highly evocative Nationalist slogan “Jai Hind” was coined by Netaji.