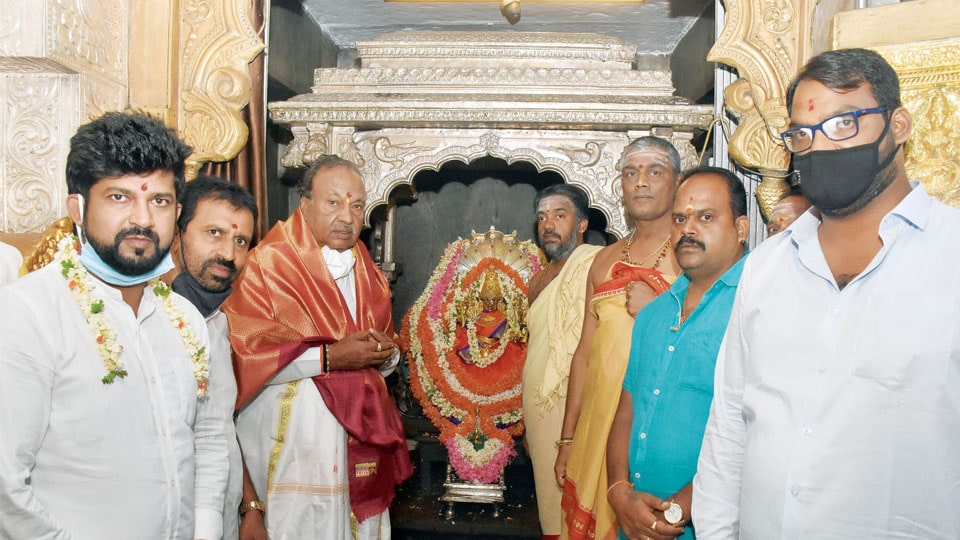 Mysore/Mysuru: Despite a ban on devotees to Sri Chamundeshwari Temple atop Chamundi Hill on all Ashada Fridays, VIPs  and a few devotees were present inside the Hill Temple this morning for darshan on the third Ashada Friday which was celebrated in a simple manner.

Actor Darshan, who is said to have arrived in the city Mayor’s car accompanied by Deputy Mayor C. Sridhar, too had darshan of the deity.

The rituals on the third Ashada Friday began as early at 4.30 am with the performance of Mahanyasapoorvaka Abhisheka, Rudrabhisheka, Archane and other customary rituals by the Temple Chief Priest Dr. N. Shashisekhar Dikshit, Priest Deviprasad and other priests.After the rituals were completed with the performance of Mahamangalarathi at about 7 am, the idol of Goddess Chamundeshwari, in Durgadevi Alankara marking the occasion, was taken out in a procession inside the temple premises after which the temple was closed at about 8 am.

SP C.B. Ryshyanth and other officials were also present.

Despite the ban on devotees, a significant number of devotees were seen atop the Hill this morning. It is said that most of them, determined to seek blessings of the deity, had arrived at the Hill last evening itself and stayed for the night at the houses of their relatives or friends atop the Hill.

It may be recalled the District Administration banned entry to public on Ashada Fridays to Chamundi Hill and even closed all entry points to the Hill both road and steps. Yet devotees have found a loophole by arriving atop the Hill the previous night itself defeating the purpose of the ban.

The Fourth and the last Ashada Friday of this year falls on July 17. The Chamundeshwari Vardhanti is scheduled to take place on July 13 and the entry of devotees has been banned.