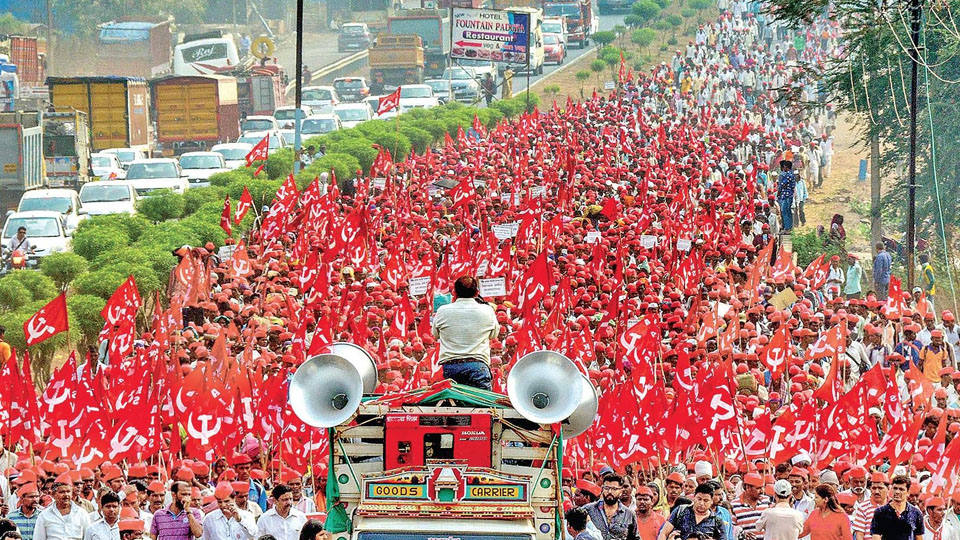 Governmental non- performance in Kerala and electoral devastation in Tripura gave the CPM its unfinest hour in history. Just then the imaginative leadership of the All India Kisan Sabha miraculously pushed it into its finest hour; the Nasik-Mumbai Long March of some 50,000 farmers marked a milestone in the political annals of the country. The lesson is obvious: the CPM as presently constituted and led has become irrelevant, but so many people are oppressed that a well-conceived movement pursuing socialist egalitarianism can emerge a winner.

People are ready as public reactions to the Long March showed. In some areas locals showered flowers on the marches. In some other places NGOs and residents welfare associations lined up to give them food and water. Traffic Police went out of their way to say that the march never created bottlenecks; in crowded areas the marchers took to the road past midnight so that citizens wouldn’t be inconvenienced. All this while the farmers developed swollen eyes, foot blisters, dehydration and blood pressure problems.

The success of the Kisan Sabha’s march could be attributed to (a) the people-friendly style in which it was conducted, and (b) a growing feeling among citizens that some basic changes in the polity are overdue. The time has come for Indian communism to recognise this and alter its course. Lenin altered Marx. Stalin altered Lenin. Mao altered everything while Deng Xiaoping altered Mao himself. During these tumultuous alterations that brought progress, Indian communists stuck to imitations with shameful slogans such as “China’s Chairman is Our Chairman.” Can’t India’s Marxists work out  a “Communism with Indian characteristics”?

Perhaps, they can start by looking at the way Europe’s communists changed themselves to fit into the temper of the democratic systems in which they lived. Adjuncts to Soviet Communism as India was, they saw sense in Marxist philosopher Antonio Gramsci’s argument that sectarianism must give way to social alliances that sought social reforms. The concept of “another democratic way to socialism” gained ground. Inspiration came also from the Prague Spring of 1968, when the Soviet Union ruthlessly crushed a popular movement for reform in Czechoslovakia.

Old-style ruthlessness was the backbone of old-style communism. Even in its heyday state terror was unacceptable to people (Stalin’s purges and Mao’s cultural revolution will remain historical landmarks of horror). On the other hand, the appeal of socialism and democracy grew in strength. The influential communist parties of Italy and Spain embraced “Eurocommunism.” After the Soviet Union disappeared, the French communist party also toyed with Euro. The communists of Britain, Belgium, Netherlands and Austria are Eurocommunists. The collapse of the Soviet Union made traditional communism more palpably irrelevant. India is the only country in the world where the old-style communism of the Soviet era survives. That’s a shame.

Eurocommunism was part of the effort to move away from the unpleasant connotations  the very term “communism” acquired through repressions in communist countries. Today, China and Vietnam are the only countries where a Communist party, named as such, rules. Other countries have embraced the more acceptable term of socialism. Germany’s Social Democratic Party was born out of the General Workers Union in 1875. Communists and revisionists within its fold carried on a prolonged battle. The revisionists eventually won with their argument that social and economic justice for the working class can be achieved through democratic elections without violent  class struggles.

This is the line India’s communists must now formally and ideologically adopt. By participating in electoral politics, they have effectively accepted the democratic system in preference to B.T. Ranadive’s revolution thesis. But they have not reaped the benefits because they are caught in old-style theoretical polemics of the Prakash Karat type on the one hand and luxury-lovers of the Pinarayi Vijayan type on the other. (Karat’s explanation of the Tripura debacle was so laboured that it sounded like saying that the CPM lost because it didn’t get votes. Vijayan’s Cabinet decided recently to buy 35 Innova Crysta SUVs costing about Rs. 10 crore for Ministers).

The best way out is to leave the CPM for theoreticians and lovers of the good life. Others could follow the European model and float a new party devoted to socialism and democracy. Constructive revisionism could save the essence of the communist dream by adapting it to the moods and needs of the present times.That is what the Kisan Sabha did. That’s why those who led the Long March must now lead India to Indocommunism. Over to Ashok Dhawale, Jiva Gavit, Ajit Nawale, Kisan Gujar and Vijoo Krishnan.