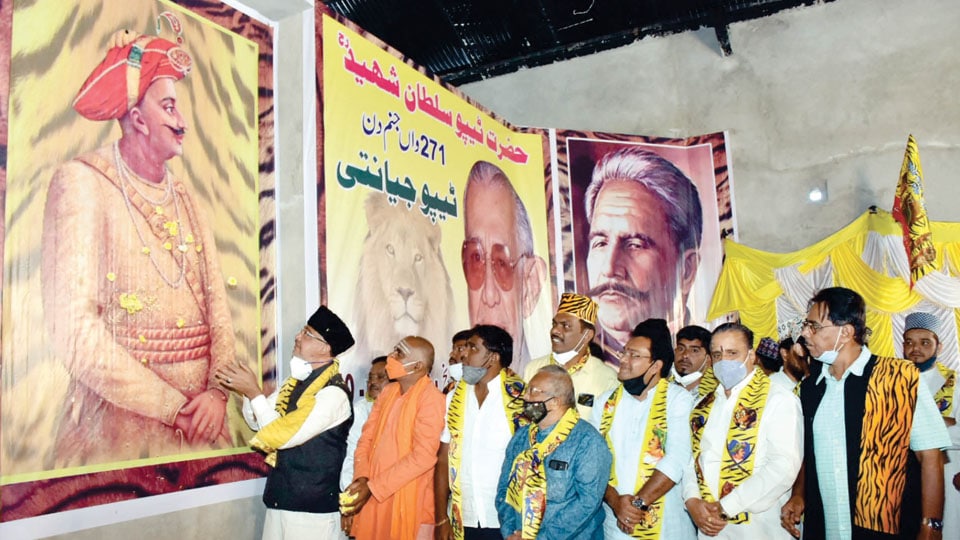 Mysore/Mysuru: Floral tribute was offered to the portrait of Tipu Sultan as part of 271st Tipu Jayanti celebrated under the leadership of MLA Tanveer Sait at Apna Ghar in Bannimantap this morning.

Addressing the gathering, Sait, who also heads Tipu Sultan Wakf Estate, said that they were not for conflict with the Government over Tipu Jayanti issue.

Maintaining that there should be no politics over Tipu, he condemned the Government’s decision of not celebrating Tipu Jayanti and challenged the Government to impose a ban on liquor and gambling, which has been ruining lives of crores of people.

Asserting that it was Tipu Sultan who saved Ranganathaswamy temple at Srirangapatna from foreign attackers, Sait said that a precious stone donated by Tipu to Srikanteshwara temple at Nanjangud is being worshipped even today and people at a village in Kolar district worship Tipu every day.

Urging the leaders in the ruling dispensation not to pollute the minds of people by unnecessarily raising Tipu issue, he invited everyone opposing Tipu for an open debate and called upon people to follow the ideals of Tipu.