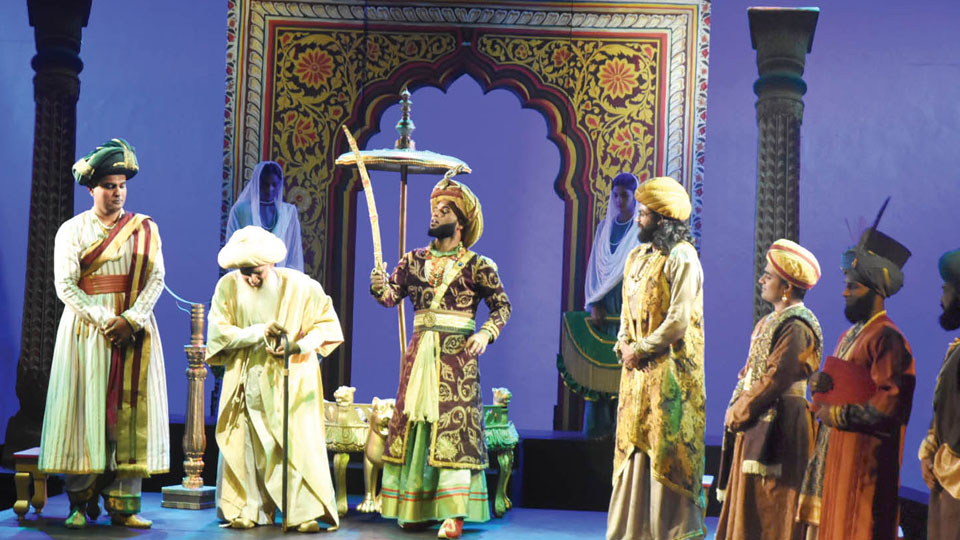 Mysore/Mysuru: The play ‘Tipu Nija Kanasugalu’ (Real Dreams of Tipu) made its stage debut at Rangayana last evening and it won the hearts of the audience.

The Bhoomigeeta auditorium of Rangayana was jam-packed and the play, written and directed by Rangayana Director Addanda C. Cariappa, was staged amidst tight Police security.

Many in the audience spoke highly about the play direction, costumes and the excellent performance of various roles by the actors in the historical play. The stage was designed (Ranga Vinyasa) by Shashidhar Adapa, music was provided by R.C. Dhananjaya and Subramanya Mysuru, lightings by Mahesh Kallathi and sound by P. Shivakumar.

The audience sat in rapt attention from the beginning of the play and watched it with the same attention till the end. They gave a standing ovation when the play concluded. Though the auditorium has the capacity to accommodate 250 people, there were more people who witnessed the play.

Audience started trooping into the Rangayana premises in groups after being frisked by Police as soon as the gates opened. After watching the play, they complimented Addanda Cariappa for the spectacular historical play.

The play, based on letters of Tipu Sultan which are preserved in the British Library and has been translated into Kannada by Chidananda Murthy, begins with the scenes from the fourth and final Anglo-Mysore war. The three-hour play captures the imagination of the audience and has earned accolades.

Tickets for the show were sold like hot cakes and many people returned disappointed. “We came here with the hope of purchasing tickets but they told us all the tickets have been sold out,” said many who stood outside Bhoomigeeta.

Former Rangayana Director C. Basavalingaiah too watched the play ‘Tipu Nija Kanasugalu’. Earlier, he was prevented by the Police from entering the Rangayana premises. The Police officers present there said they had information that he would interrupt the play and stage a protest and hence was being denied entry.

Basavalingaiah argued that he had purchased tickets to view the play. “I have come here to watch the play and not to protest,” he said, displaying the entry ticket. “If you feel that we will stage a protest, please make your staff sit next to me and take legal action against me if I protest,” he said.

This led to arguments for some time but the Police relented after taking an assurance that the play would not be disrupted. Later, Basavalingaiah complained to Addanda Cariappa who welcomed him and led him to the auditorium.

After the play was staged, Director of the play Addanda Cariappa introduced the artistes to the audience as the audience kept clapping.

“We have worked hard to produce this play ‘Tipu Nija Kanasugalu.’ We have unravelled the truth and there has to be a full stop for historical lies peddled for many years now. All the artistes were provided with historical facts and the roles were assigned only after they understood the characters. We are ready to perform 100 shows all over the State and the Government must support our endeavour,” Cariappa said.

The response of the audience to the play ‘Tipu Nija Kanasugalu’ was overwhelming, said Rangayana Director Addanda C. Cariappa. Speaking to reporters after the play was staged at Bhoomigeeta last evening, he said, “Noted writer Dr. S.L. Bhyrappa and several other important personalities have watched the play and the first show was a tremendous success. The play and the actors received a standing ovation at the end. Everyone who has watched the play has appreciated it.”

He said that the tickets of the play to be staged on Nov. 21 (today) have been sold out.

The play was staged at Bhoomigeeta amidst tight Police security due to a controversy that erupted as soon as the staging of the play was announced. Over 300 Policemen, including those in mufti, guarded the main gate of Rangayana and the entrance of Bhoomigeeta. Everyone was frisked before allowing entry and even the bags were checked.