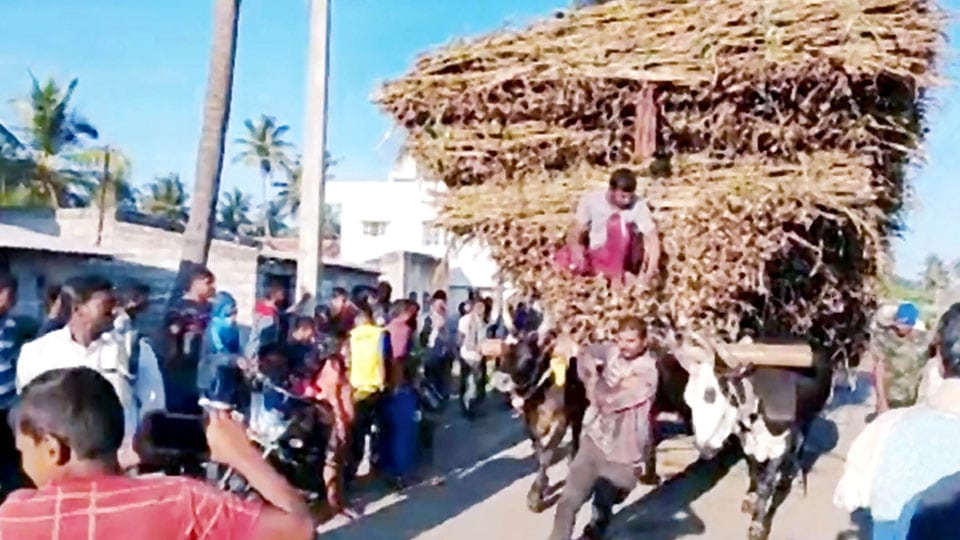 They had made the bullocks pull 14.55 tonnes loaded cart for 3 km

Mandya: Taking serious note of ‘cruelty to animals,’ Mandya SP H. Parashuram has asked Keragodu Police to take up a suo motu case against a group of youths for making a pair of bullocks to pull a bullock cart laden with 14.55 tonnes of sugarcane at H. Malligeri village in Mandya taluk recently.

The SP has tweeted “Keragodu Police Station mobilized the accused of filling more than 14 tonnes of sugarcane into a bullock cart and torturing the bulls in Malligere village. Case has been taken up under Article 188/2020-Prevention of Cruelty of Animals Act, 1960. Suitable action will be initiated against the accused.”

Recently, the youths of Vinayaka Geleyara Balaga with a view of creating a record had loaded 14.55 tonnes of sugarcane into the bullock cart and had made the bulls to pull it for nearly 3 km. The bullocks were struggling to pull the heavy weight and as the video went viral, animal activists had flayed the incident and wanted stern action against the youths for torturing the bullocks in a quest for record.

The animal activists are planning to create awareness programmes in different parts of Mandya district to prevent such incidents in future.