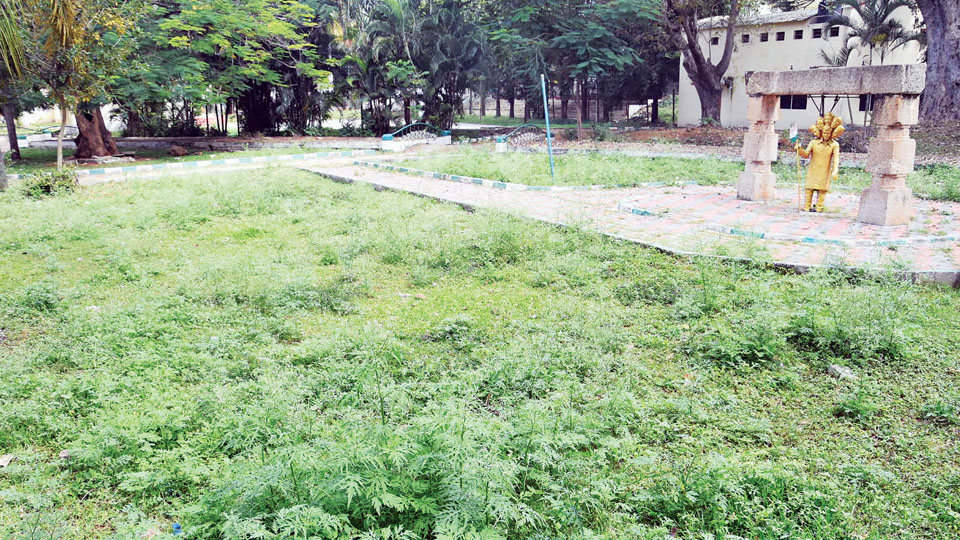 Mysore/Mysuru: The Freedom Fighters’ Park at Subbarayanakere, a piece of land in the heart of city, which was witness to many historical events, is all set for a total facelift at an estimated cost of Rs.1 crore.

This place had been in a state of neglect for many years with no attention by Mysuru City Corporation (MCC). After sustained efforts by the area Corporator and Mysore District Freedom Fighters’ Association, this historic place saw some developmental activities. However, development was going on only in bits and pieces much to the displeasure of citizens.

Now, Rs. 1 crore has been released from MLA Local Area Development Fund for sprucing up the Park and making it attractive so that citizens can spend time amid greenery and even allowing the health buffs to burn calories by jogging or walking in dedicated lanes. First and foremost, the compound wall would be constructed to protect the property from encroachment and to prevent stray cattle from getting inside the park for grazing.

Co-operation and District Minister S.T. Somashekar this morning performed bhoomi puja for the launch of a slew of development works inside the Park which comes under MCC Ward No. 23. Chamaraja MLA L. Nagendra, MCC Commissioner Gurudatta Hegde and Area Corporator Pramila Bharath were present at the bhoomi puja.

Speaking on the occasion, the Minister said that the works would be taken up at a cost of Rs.1 crore. Since the area Corporator has other plans for further development of the Park, the MCC Commissioner had been asked to look into it. “There is no dearth of funds. The State Government is ready to release another Rs.1 crore for the beautification of the Park,” he added.

The MCC has planned to build 200 metres compound wall across the Park, 200 metres jogging track, landscaping, sewage water drain and installing 30 stone benches across the Park. Besides, drinking water unit will be established at a cost of Rs.10 lakh out of the general fund.

Pramila Bharath, Corporator of Ward No. 23 told SOM that she has plans to develop the Freedom Fighters’ Park as a model for the entire city. She has already discussed her idea with MCC Commissioner Gurudatta Hegde who has promised to prepare a blueprint for further improvement of the Park. She wants to raise a small Ayurveda Park in memory of Dr. M.G. Krishnamurthy, a noted Ayurveda doctor and former President of District Freedom Fighters’ Association.

A replica of freedom fighter Bhagat Singh in gallows would be re-designed with the help of students of Chamarajendra Government College of Visual Arts (CAVA) to make it more attractive, she said.

A small library will also be established inside the Park especially to put on display a number of books on the country’s freedom struggle which are presently under the custody of Freedom Fighters’ Association, Pramila Bharath said.

There is a plan to have a swimming pool on the same spot on which the pool existed several years ago in the name of ‘Bahusar Swimming Pool.’ If this project gets approval, the jogging track would be shifted elsewhere, she added.

The replica of the famous ‘Dandi March’ would remain in the same spot but the fence would be widened further. The total wiring inside the Park would be changed to ensure that all the lights work during night to check illegal activities. The miscreants consume liquor in places where the lights don’t work despite appointing two security guards. The Police authorities would be requested to step up vigil during night to check nefarious activities, she noted.