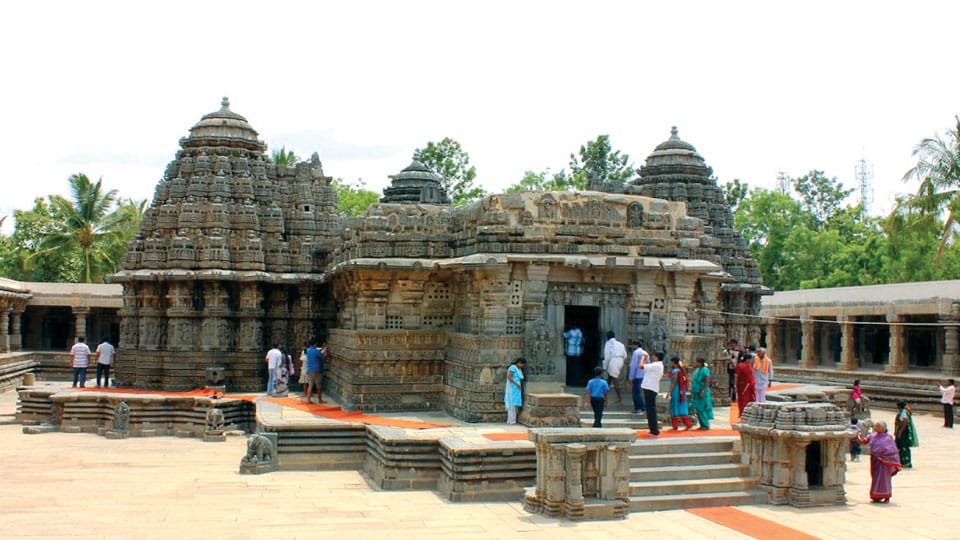 Mysore/Mysuru: The Tourism Department and the Mysuru District Administration have drawn up plans to develop the Keshava Temple at Somnathpur in T. Narasipur Taluk at an estimated cost of Rs. 3.74 crore.

The Temple is located at a distance of 35 kilometres from Mysuru and the 13th-century structure is a paradise for art connoisseurs. At the tourism development meeting held at the Deputy Commissioner’s Office yesterday, officials also discussed the development of the Keshava Temple. The meeting, chaired by District Minister S.T. Somashekar, had taken a decision to scrap the controversial ropeway project atop Chamundi Hill.

Zilla Panchayat CEO B.R. Poornima, who holds the additional charge as Commissioner of the Department of Archaeology, Museums and Heritage, told the meeting that the historic temple was already in the UNESCO World Heritage Site status and any development should conform to the UNESCO guidelines.

According to the epigraphical records available with the Archaeological Survey of India (ASI), Soma, commander-in-chief of the Hoysala king Narasimha III (1254-1291 AD) built the shrine in 1268 AD. Built using a soft stone (greenish schist stone), every inch of the temple is adorned with various sculptures and the entire shrine is raised on a star-shaped moulded platform.

Replying to the MLA, Deputy Commissioner Dr. Bagadi Gautham said, “We cannot change the UNESCO guidelines on heritage sites and temples. We have planned a comprehensive development without any harm to the temple structure and without violating the guidelines. Also, the plans will not trouble the residents.”