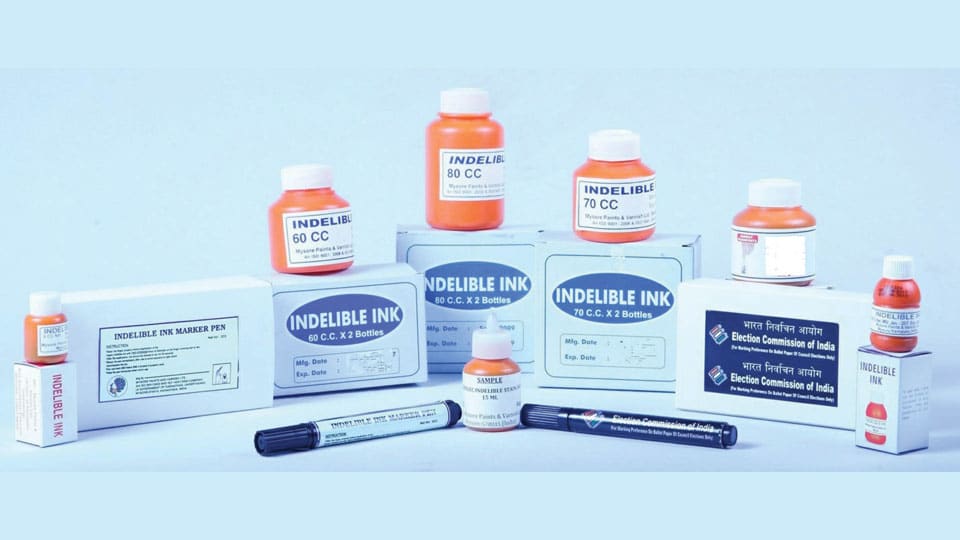 Mysore/Mysuru: The indelible ink vials manufactured by the Mysore Paints and Varnish Limited (MPVL) for marking the fingers of those casting their votes will soon be relegated into history as the company will in future manufacture trendy marker pens for the same purpose.

The MPVL, also called MyLAC, is the sole supplier of ink for elections. The Election Commission has already asked the MPVL about the availability, reliability and also the usage of the pens and the Commission has confirmed that it wants to use indelible pens henceforth, MPVL Chairman N.V. Phaneesh told Star of Mysore.

The MPVL has developed marker pens with technical support from National Physical Laboratory, National Research Development Corporation and the National Chemical Laboratory on the technology, the colour combination and the texture of the ink. Each pen could be used to mark 1,000 voters.

When compared to the indelible ink vials, the marker pens are convenient, user-friendly and economical. Sometimes, while transporting, the indelible ink vials leak and there were complaints of wastage and spill-over. With the marker pens there are no such fears and it is convenient to carry and to apply on fingers. Moreover, it also saves the time of polling booth officials.

Phaneesh said that for the forthcoming Assembly elections in five States — Uttar Pradesh, Uttarakhand, Manipur, Goa and Punjab — the respective State Election Commissions have placed orders for indelible ink and 5,04,000 vials have been produced at MPVL, and except for Uttar Pradesh that has sought 4 lakh vials, the requirements of all the other States have been fulfilled, he said.

“Since 1962, we have always supplied indelible ink on time. We work overtime to fulfil the order commitment and we have not failed in even a single schedule so far and we do not intend to fail,” he said.