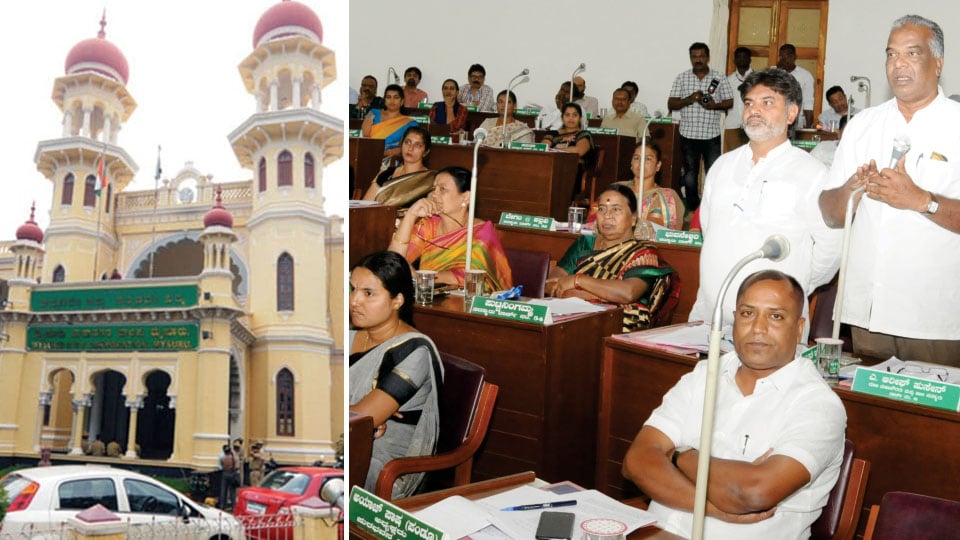 Mysuru: At yesterday’s MCC monthly meeting, the Council witnessed chaotic scenes over the alleged corruption where two bills worth Rs. 1.40 crore were sanctioned and approved for one work on M.G. Road. Corporators alleged that bogus bills were raised by the officials.

Taking the issue seriously, Mayor Pushpalatha Jagannath announced the issuance of notices to Zone 1 Assistant Commissioner Sunil Babu and Junior Engineer Mohan Kumari. The Mayor relieved both of them from their offices and asked them to report to work at the MCC main office.

Corporators blamed the official of being errant. But the Mayor, who announced to relieve both the officials, had to change her decision later after the same Corporators advised the former not to be harsh on them. Moreover, the officials irrespective of departments should be given some time to mend their ways.

MCC Commissioner K.H. Jagadeesha said that it would be inappropriate to initiate action against the officials without following stipulated procedures. Eventually, the Mayor acceded and gave time till February next for the officials to mend their working style.

The issue was raised by opposition leader B.V. Manjunath. Advocate and Corporator M.U. Subbaiah argued that an FIR has to be lodged as it is prima-facie proved that the officials have misappropriated the money. “Prima-facie looks like the officials have indulged in corruption and as such a Police complaint has to be booked. If the officials are not guilty, then the Police will file a B Report,” he said.

“We will explore legal options like filing a case with the Anti-Corruption Bureau (ACB) or file a private complaint in a Court of law against the officers,” he said.

Urging the Mayor to call a special Council Session in 15 days as the MCC meets only once a month and one month will be too much of a delay to file an FIR, a special meeting must be called. “Calling an internal enquiry also is of no use as the panel that will probe the misappropriation will not have powers to take penal action against the erring officials. Instead, an FIR must be lodged,” Subbaiah argued.

Responding to Subbaiah, Mayor Pushpalatha Jagannath agreed to call a special meeting in 15 days to discuss the alleged corruption issue. This issue stretched beyond 7 pm yesterday as records of the bills had to be brought to the meeting and the Mayor had to take special permission to extend the meeting beyond 7 pm. The meeting ended at 8 pm.