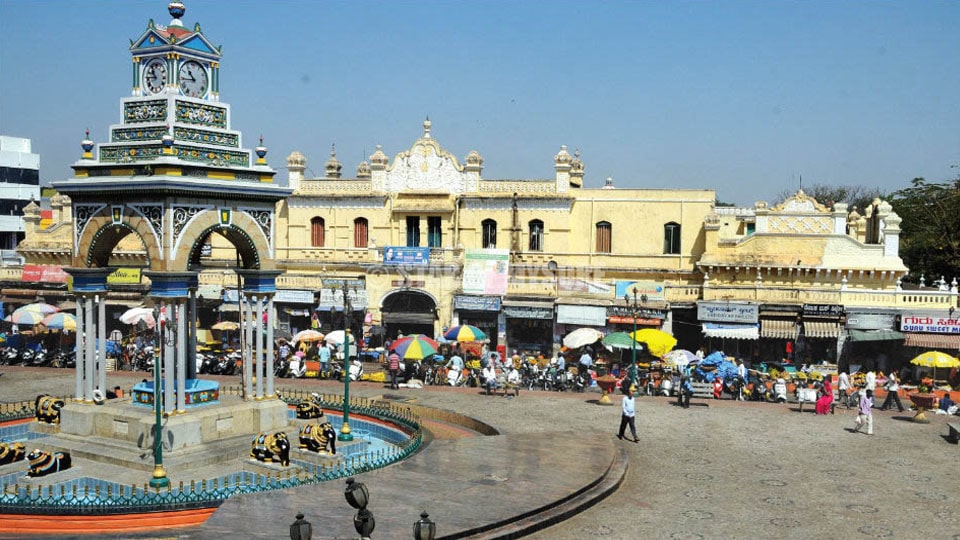 Mysuru: The Mysuru City Corporation (MCC) Council, yesterday resolved to recommend to the State Government to demolish and rebuild the iconic Lansdowne Building and Devaraja Market during the Council meeting held at the Old Council Hall of the MCC which was chaired by Mayor Pushpalatha Jagannath.

This recommendation was placed before the Heritage Committee last year where the Committee members opposed the demolition and opined that the heritage structures could be conserved. The Task Force was constituted following the collapse of the portion of the Lansdowne Building in August 2012 in which four persons died while a portion of Devaraja Market came crashing down in 2016.

The MCC has now passed a resolution clearing the demolition and subsequent reconstruction of two of the city’s architectural landmarks and has sent the recommendation to the State Government. The fate of these two heritage structures now rests in the hands of the government.

As the two government-constituted panels offered different opinions, Mysuru Deputy Commissioner had withheld his decision on the fate of the two structures, and subsequently directed the MCC Council to discuss the issue. MCC’s Superintending Engineer Suresh said that the State Government would take a final decision on the issue.

Earlier, Corporator SBM Manju sought a clarification whether there is any legal provision                       to go ahead with the demolition if the government favours for it as the Heritage Committee was against it. Corporator R. Nagaraj said Mysuru is popularly known as ‘Heritage City’ across the world but there is no official record to substantiate the same. It is only due to the buildings that date back to the period of the Wadiyars that the buildings are called heritage structures, he added.

Former Mayor Ayub Khan expressed concerns about encroachments not being cleared around the Mysore Palace at a time when officials from Swachh Survekshan were in city to assess the level of cleanliness.

“Encroachments on footpaths have been cleared in all zones, but the officials are yet to initiate a drive to clear pavements. Hundreds of tourists flock the Palace and other attractions in the area on a daily basis, but the presence of vendors on pavements makes it hard for them to walk,” he said.

Intervening in the issue, SBM Manju said that he was a witness to the operation to evict the hawkers, who had been  readily occupying the part of the road after vacating their articles from the footpath. But soon after the eviction drive, the hawkers are back on the streets. “This shows how effective our action against encroachers is,” he said.

Cutting across party lines, Corporators alleged that some officials were collecting hafta from street vendors and encroachers. Corporator M.V. Ramprasad alleged that many encroachers have occupied certain streets and were threatening other shopkeepers in the locality. He alleged that they run a mafia and the MCC was a mute spectator.

MCC Commissioner Jagadeesha assured them of acting against the encroachers. Deputy Mayor Shafi Ahmed was present.

4 COMMENTS ON THIS POST To “Devaraja Market, Lansdowne Building to be razed”