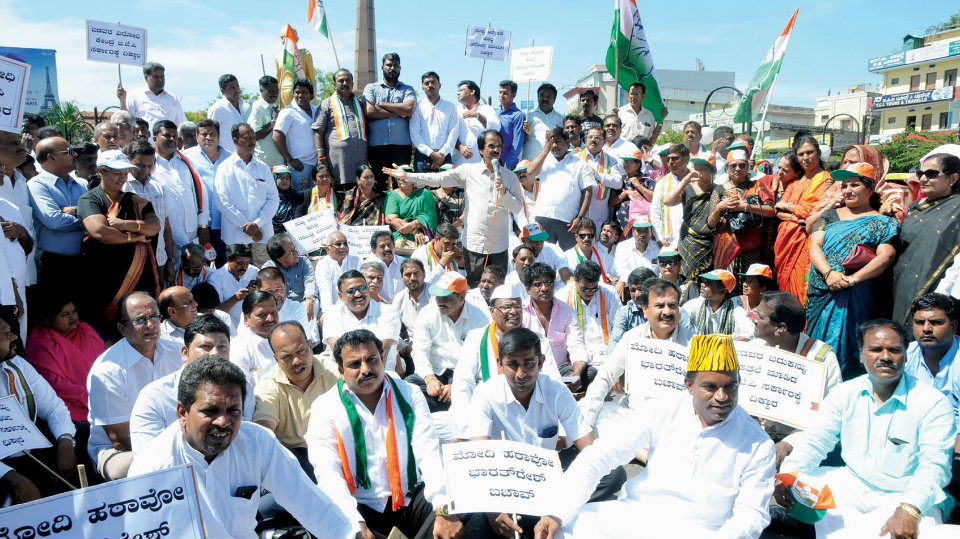 Mysuru:  Accusing that the Union Government led by Prime Minister Narendra Modi failed to take any action to lessen the miseries of the common people post demonetisation, members of District Congress Unit staged protest near Gandhi Square in city yesterday.

They protesters, led by senior Congress leader and former Chairman of State Legislative Council Prof. B.K. Chandrashekhar, raised slogans against the Prime Minister for taking decision unilaterally without consulting the opinions of the experts.

They alleged that the decision of demonetisation of higher currency notes of Rs.500 and Rs.1,000 face value had put crores of people under misery.  Though the PM had promised of unearthing black money and rooting out corruption in the nation, no such miracles happened after the demonetisation.

Crores of people had become jobless, poor and middle class people had to bare the brunt and lakhs of small scale industries were destroyed by the sudden announcement of the PM. The demonetisation didn’t make any impact upon rich and influential persons in the society.

They also accused that the Prime Minister had failed to put back the economy on the right path that affected seriously after the announcement of devaluation of higher currency notes.

Addressing the protesters, Prof. Chandrashekhar, who is also an economist, said that the demonetisation of currency notes is a common process in every country which will be taken after consulting the experts once in 100 or 200 years for development of the country.

“United States and Britain like developed countries of the world had not taken such hasty decision of demonetisation of higher currency notes, but the Prime Minister Narendra Modi made the decision after completion of two years of his governance reducing the nation’s economy in shambles. The PM had taken this decision going by his coterie not even discussing with his Cabinet colleagues and bringing it to the notice of Reserve Bank of India (RBI),” he charged.