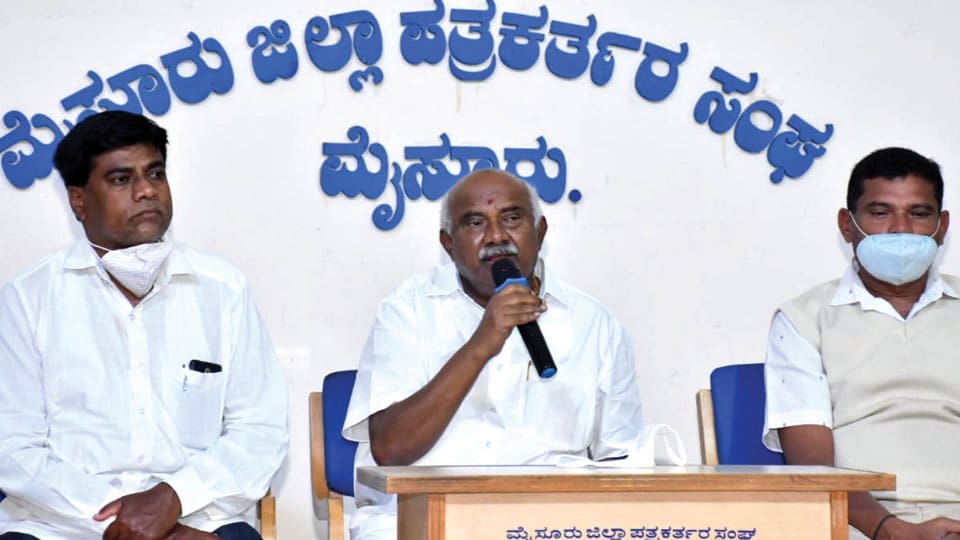 Addressing a news conference at Pathrakartara Bhavan here yesterday, he said there was no truth in Siddharamaiah’s claim that the latter was being targeted by RSS. In democracy, they need to get their demand fulfilled only through agitation. It would not be possible to get this demand fulfilled just because the same political party was in power both in the Union Government and the State Government. In the wake of this, it would be good, if Siddharamaiah led the ongoing agitation, he added.

“Siddharamaiah has served as Minister, Deputy Chief Minister, Chief Minister and Opposition Leader, and he is our leader too. I have observed Siddharamaiah’s statements that he was not invited for the agitation, it was an effort to snatch away his leadership and a game plan to single him out. There is no iota of truth in his allegation that RSS is behind the agitation. The Kanaka Gurupeetha Seer, MLC H.M. Revanna, RDPR Minister K.S. Eshwarappa and JD(S) MLA Bandeppa Kashempur have personally invited Siddharamaiah for the convention but he has stayed away from it,” Vishwanath said.

The BJP MLC said, in order to make Siddharamaiah as the CM, the entire Kuruba community worked hard, sold sheep and took the help of other castes and communities. The role of community to help Siddharamaiah to reach pinnacle in State politics cannot be disputed. Unfortunately, he did not contribute anything for society. At least he should have participated in the agitation to protect the interest of his own community, he pointed out.

The agitation would have reached a different level had Siddharamaiah taken the lead. He did not come forward during the establishment of Mutt for Kuruba community and the demolition of Kanaka Gopura in Udupi. Siddharamaiah got the social, economic and academic survey done throughout the State but refused to accept when it was ready. He did not participate in the discussion. Had he placed the survey report for open debate, perhaps Siddharamaiah would have become the CM again, he said.