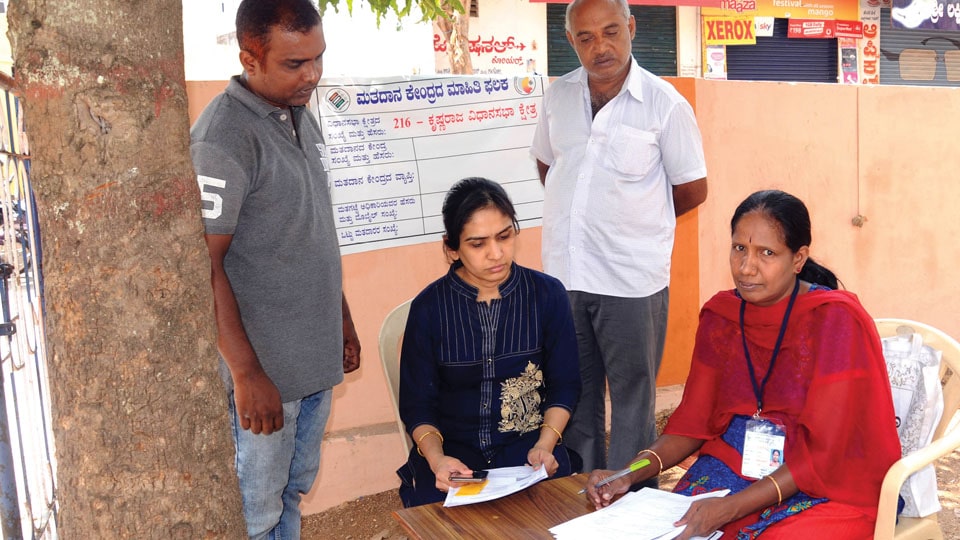 Mysuru:  The ‘Minchina Nondani’ (special voter enrolment drive) to enrol new voters for the forthcoming Assembly elections to be held on May 12 began in city this morning. The special drive has been initiated across the State by the Chief Electoral Officer, Karnataka. The drive will conclude at 5 pm today and the voters will have time till Apr. 14 to enrol their names.

Though the drive across the city began at 10 am, officials who were in-charge of enrolling voters, had not come to some booths even at 11 am. This made people impatient and they complained to media and election authorities against errant officials.

Booths where officials were not present at 10 am included Ursu Boarding School at Nazarbad, two booths on Ramanuja Road and a couple of booths at Ashokapuram. The officials, however, arrived after 11 am and hurriedly began the process of voter enrolment.

New voters who have turned 18 and above as on 1.1.2018 had to carry their birth certificate and any one of the documents — Aadhaar card, passport, ration card, electricity bill, house rent agreement, bank pass book or driving licence — to prove their place of residence. They had to carry two passport size photographs to be handed over to officials. NRIs had to carry a separate set of documents and fill special forms.

In the Krishnaraja Constituency, former Minister and BJP leader S.A. Ramdas visited houses coming under 223 polling booths in the constituency and urged the voters to enrol themselves in the enrolment drive. He also urged them to make sure if their names are in the voters list.

Apart from inclusion of voters, today there was a provision for voters to check if their names were in the voters list, correction of spellings in names and addresses, change in age and place of residence and even deletion of names following the death of the voter. For deletion of names, however, a person had to produce the death certificate of the deceased for his name to be deleted.

The enrolment drive will conclude at 5 pm today and later, the officials will send the list to the district electoral officer who will in turn send the list to the State Election Commission in the prescribed format for the inclusion in the voters list. Once the list is approved, voter slips will be sent to the houses of the respective voters, said officials.

The Election Commission of India has taken several measures to make the poll process smooth and for the convenience of the voters. Among the steps are to set up voter service centres near the booths on behalf of the Commission to make the election process smooth, effective and transparent.

At these service centres, voters can clear their doubts on the election and the voting process. Apart from this, new and upgraded technical tools are being used in election planning for monitoring the election process.

‘Suvidha’ is a single window system for candidates and political parties to apply for permissions (meetings, rallies, vehicles, temporary election office, loudspeakers, helicopters and helipads etc). The ECI has issued directions to give permissions within 24 hours.

‘Sugam’ is a vehicle management system with the facility of issuance of requisition letters for vehicles, Capturing of vehicle details with address, mobile number and bank details of owner and driver, transfer of vehicles from one district to another district, etc.

Do your duty as a voter

* Visit the polling booth near your house to check if your name is in the voter list.

* If your name is missing, enrol in the Special Enrolment Drive till 5 pm today.

* Even if you have voter ID card, visit the booth to check your name in the list.

* This will help you to avoid last-minute confusion and running around on the election day.

* Voting is your Right, don’t miss to Vote.