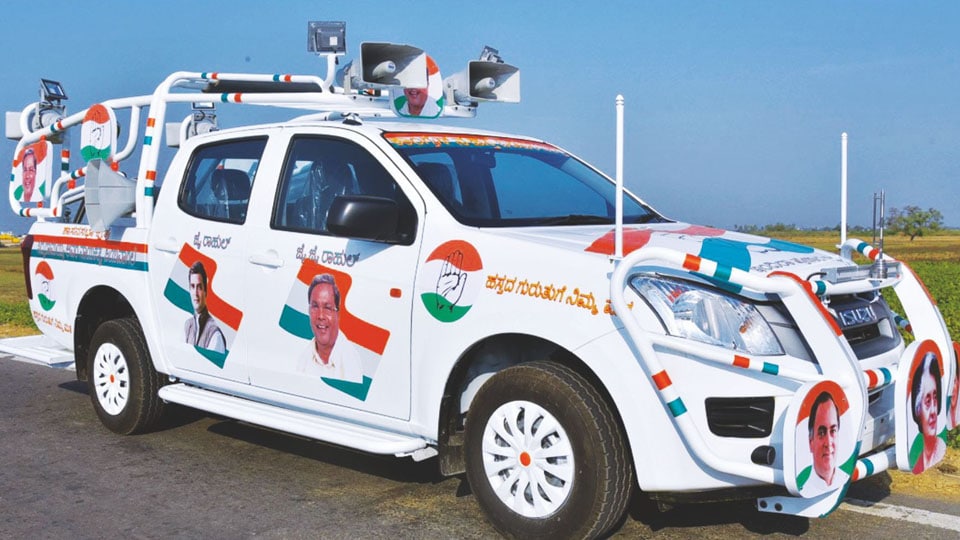 Mysuru:  Elections are good times for automobile design firms and as the political scene picks up pace in Karnataka and politicians prepare to hit the roads, sturdy custom-built vehicles for poll campaigns have come into sudden demand.

Automobile design firms specialising in modification of cars and jeeps have been receiving orders for modifying brand new vehicles into attractive campaign vehicles, complete with party symbols, flag colours and photos of leaders painted on them.

Over 35 such vehicles have been purchased for election campaigns in Karnataka and an automobile design firm in Andhra Pradesh has supplied them.

One such made-to-order election vehicle had come to Mysuru yesterday evening and was parked in front of the house of District Minister Dr. H.C. Mahadevappa where the representatives from the firm had come to approach Mahadevappa’s son Sunil Bose to purchase the vehicle for his election campaigns. Bose, however, declined the offer, it is learnt.

Tracking the specially-designed vehicle, Star of Mysore learnt that the vehicle was remodelled in Andhra Pradesh and many such vehicles have come to Karnataka for use during elections. Durgaprasad of Guntur-based Jayalakshmi Designers told SOM this morning that they were in this business since 25 years and he has designed vehicles for all political parties including the Congress, the BJP and the JD(S) in Karnataka.

“During the 2013 Karnataka Assembly elections we found that candidates were canvassing in autos and poorly-designed open jeeps. Candidates and supporters crowded the vehicles and it was risky. Also, such vehicles used to breakdown in rural areas forcing the candidates to abandon campaigning on vehicles. We saw a business opportunity here and began to modify vehicles for such campaigns,” he said.

Brand new Isuzu vehicles are most sought after for campaigning, given the space they provide. “We alter the vehicle to meet campaign needs, fully painted with party colour and symbol, special focus and LED lights, public address systems and extra batteries. The vehicles are designed in such a way that it catches the eye and even in the night, voters should know which leader is coming to campaign in their village,” he added.

At the rear-side of the vehicle, special steps (painted with party colour) is erected so that the candidate can easily climb the vehicle and stand at a vantage point. The modified vehicle can provide room to at least 10 to 15 persons and meetings can be addressed by candidates from atop the vehicle. “Our vehicles are mostly preferred because of their manoeuvrability enabling the leaders to move into dusty lanes and by-lanes even in rural areas,” he said.

Durgaprasad explains that the extra fittings like the public address systems, lights and extra iron rods could be removed later so that it could be used for personal transport. “We make minimum changes in the vehicle without affecting the originality,” he said. He added that already, 35 vehicles have been supplied in Karnataka and 30 more are in pipeline.

Once the order is placed, the vehicle is purchased from the company and modified in a week. “The vehicle is registered in the name of the purchaser and the total cost of the vehicle is Rs. 13 lakh including the fabrication and modification charges,” he said.

Politicians do not purchase such vehicles directly but do it through their associates and friends. Sources said that if any candidate purchases such vehicles in his or her name, it will be included in the election expenditure which is limited to Rs. 28 lakh for this election.

“The Karnataka Congress Campaign Committee headed by Energy Minister D.K. Shivakumar has ordered 15 such vehicles and four vehicles have been delivered,” he said. 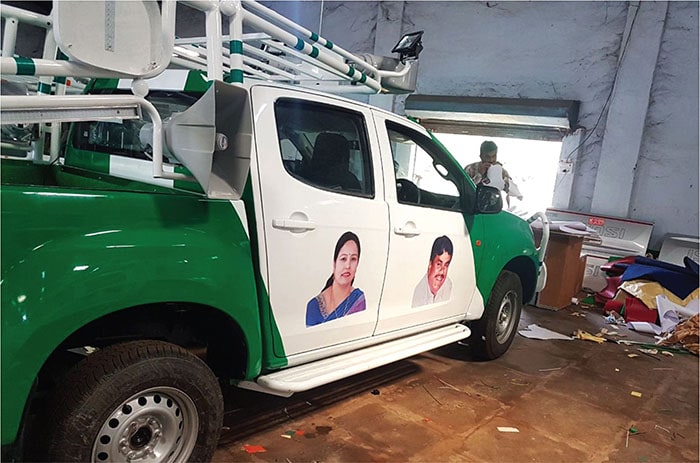 The custom-built campaign vehicle that is being designed for JD(S). The vehicle will be delivered today to Bhavani Revanna, daughter-in-law of former PM H.D. Deve Gowda.

“Our vehicles are also being used by National BJP President Amit Shah and State BJP President B.S. Yeddyurappa in their election rallies,” he added.

However, for those who cannot afford to buy new modified vehicles, some travel agencies are providing them on rental.