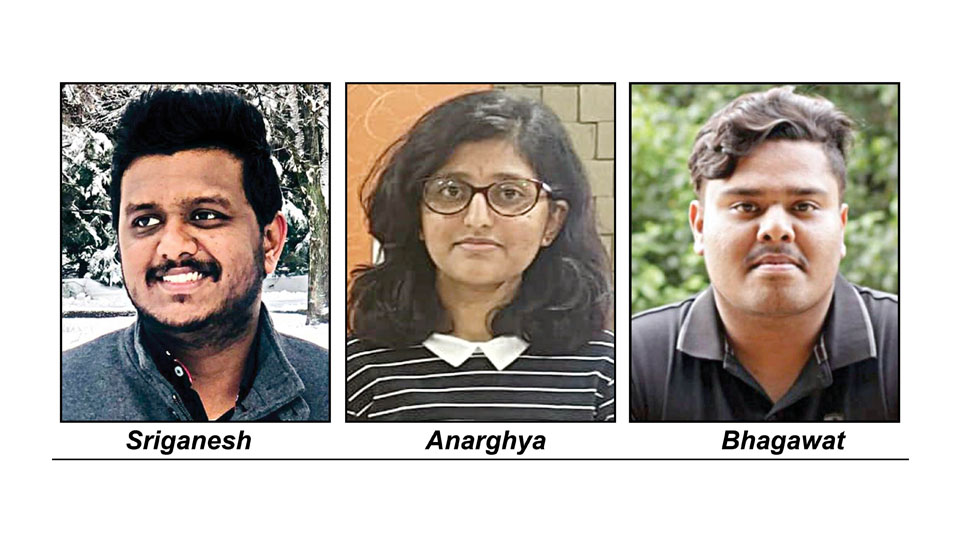 Mysore/Mysuru: “We would not have survived if the airlifting was delayed by a day,” said Sriganesh, a student from Mysuru who returned from war-torn Ukraine safely on Sunday morning.

Sriganesh, son of Puttamadegowda and Pramilarani couple of Janathanagar in city, had gone to Ukraine about five years ago to study Medicine at Zaporizhzhia State Medical University and was set to complete his course in May. But Ukraine was attacked by Russia. However, India’s ‘Operation Ganga’ to rescue stranded Indian students in Ukraine, saved the life of Sriganesh, who landed in Mysuru safely at 4.30 am yesterday to the huge relief of his parents, relatives and well-wishers.

Sriganesh said that the Indian Embassy had asked all students studying at Zaporizhzhia State Medical University to get prepared to leave the country following the outbreak of war. Subsequently, they booked air tickets. But, all of a sudden all flights to and from their closest airport were cancelled, he said.

“Initially we thought that the war would be only at the borders. But no one had anticipated that it would be of such a huge scale in such a short time. As the war began to escalate, thunderous sounds were repeatedly heard near the hostel where we stayed. With the bombings, Internet services too got disrupted. Ukrainian authorities used to blow sirens whenever there was threat and we had to rush to the bunker to save ourselves. We used to go back to our hostel whenever sirens remained silent for sometime. There were many instances when we were forced to run back to bunkers within minutes after reaching hostel. We stayed in the bunkers all the time, deeply worried about our lives and future. We also faced shortage of food and water,” he said  recounting his ordeal.

Continuing, Sriganesh said “University authorities  had reserved 8 train bogies exclusively for Indian students to reach Ukraine’s border with Hungary. The train left our place at 10 am local time on Feb.28 and reached Hungarian border on the morning of Mar.2, covering 1,200 kms. The University authorities were with us throughout the journey. Upon reaching Hungarian border, we travelled to Hungary’s capital Budapest, travelling for six hours in a vehicle that was arranged by the Indian Embassy. Once in the Hungarian capital, we were sheltered in a Star Hotel and provided all facilities. We stayed there for one day and two nights. Subsequently, we were taken to the airport from where we left for New Delhi. As we landed in Delhi, the Karnataka Bhavan authorities took us to the Bhavan, where we were provided boarding and lodging. Later in the evening, we were taken in a flight to Bengaluru, everything for free. Upon arrival at Bengaluru, the authorities were ready to drop us at our native place for free as well. But as my parents had come to Bengaluru, I travelled to Mysuru with them. I am very thankful to all those who helped us in ensuring our safe return,” he said adding that the Government of India took care of all their expenses.

Maintaining that it was like a re-birth for him for having returned from war-torn Ukraine safely, Sriganesh said that he would probably not have survived had the evacuation been  delayed by even a day.

Anarghya, another student from Mysuru, too has returned safely. She is the daughter of Lecturer Prasanna Kumar and teacher P.V. Sangeetha, residents of Saraswathipuram.

Speaking to Star of Mysore from Bengaluru, Anarghya said that she returned safely to India and reached Bengaluru at 12 midnight on Saturday. She was a student at Kharkiv National Medical University, studying third semester Medicine.

“The war started on Feb.24 and we used to hear deafening sounds of bombings frequently close to our place. As soon as we heard the sounds of siren, we used to take shelter in metro stations or bunkers, where we were provided food by Ukrainian authorities. A few days later, we succeeded in catching a train from Kharkiv to Livi, from where we travelled in a taxi to Poland border. Upon reaching the Polish border, we were taken care of by the Indian Embassy officials and local volunteers, who provided us a mobile Sim for communication. We were sheltered in a good hotel and airlifted to New Delhi, where Karnataka Bhavan authorities took care of us. We are always grateful to Indian Embassy, the Union and Karnataka Governments for ensuring safe return to our homeland, after days of agony,” Anarghya said.

Bhagawat Ramegowda, yet another student of the city who returned safely from Ukraine, is the son of Ramegowda and Rani of Dattagalli.

Bhagawat, a second year MBBS student at Kharkiv University, told Star of Mysore that he stayed at a Kharkiv flat and he left the flat when war broke out and took shelter in a bunker.

“We used to stay in bunkers during nights and visited our flat in the mornings, whenever calm prevailed in  the area. As I had learnt cooking, there was not much problem for food till we stayed at Kharkiv. Following  directions from the Embassy, we boarded a train for free  and reached Livi, from where we travelled to Poland in a bus. After travelling 3 kms by walk, I  reached the place where Indian Embassy officials were waiting for us. Later, they took us to a hotel where all the returnees were provided food and shelter. As I got an air ticket early, I returned to Mysuru on Mar.4. Except for bus travel from Livi to the Polish border, I did not have to spend money and the Indian and Karnataka Government took care of our expenses,” he said adding that he was ever grateful to the help rendered by the Indian Embassy.

Meanwhile, it is learnt that 25 of the 31 students of the district, who were studying at Ukraine, have returned safely to Mysuru as of today (Mar.7). However, four students are still stranded in Poland while  two others are in transit and all the six are expected to arrive in Mysuru on Mar.8, according to sources, which said that the statistics are based on the information provided by the Ministry of External Affairs (MEA).