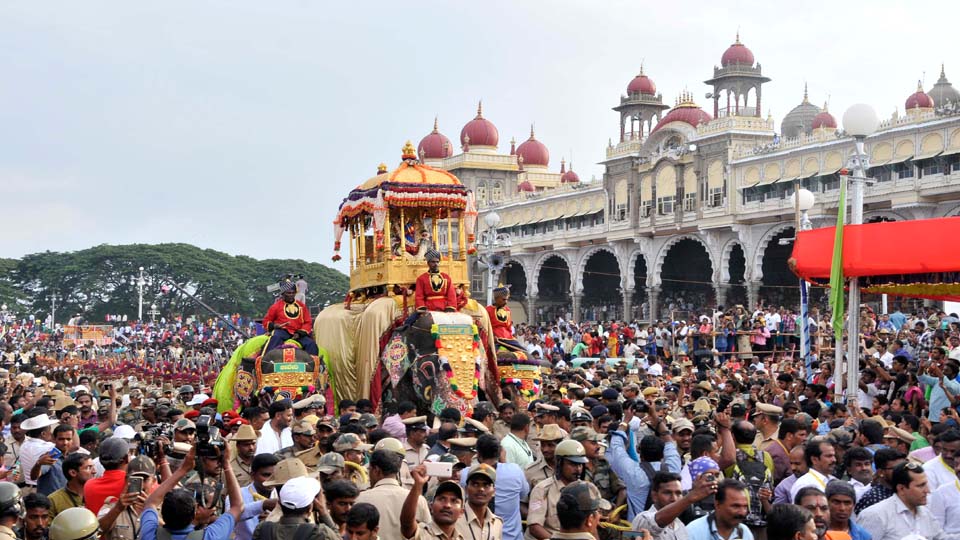 Mysore/Mysuru: How many people will be allowed inside the Mysore Palace to witness the annual Dasara procession on Oct. 26? While the State has sought permission for a congregation of 2,000 persons, it will be decided by the Ministry of Home Affairs. The State is now awaiting a directive from the Centre.

In view of COVID-19 contagion, it has been decided by the State Government to hold the Jumboo Savari inside the sprawling Mysore Palace as the Government is planning for a low-key but traditional Dasara. At the same time, haunted by the pandemic and in an attempt to follow the Centre’s guidelines, the Government does not want to allow a large gathering to witness the procession of caparisoned elephants, this time led by Howdah Elephant Abhimanyu.

The Government does not want to give the go-by for the centuries-old tradition. As such, the Vijayadashami procession will be held within the Palace premises instead of an elaborate route from Palace to Bannimantap Torch Light Parade Grounds, accompanied by tableaux, cultural and folk troupes. The Government, as of now, has decided to allow 2,000 people inside the Palace.

In case the Union Government refuses to give permission in the wake of Karnataka occupying the second place in the country for recording the highest number of COVID-19 positive cases and deaths so far, only 100 persons will be allowed inside the Palace premises on Oct. 26 as per the latest guidelines issued by the Union Home Ministry.

In fact, the Government of India had declined to alter its guidelines to allow large gatherings for the world-renowned Lord Jagannath Rath Yatra in Puri, Odisha, which forced the Temple authorities to scale-down the Yatra by holding it symbolically amidst limited devotees.

Even the age-old Bengaluru Karaga Festival was held within the Dharmaraya Swamy Temple sans devotees to check the spreading of pandemic. Going by these examples, the Karnataka Government is not sure whether the Union Government will give permission as a ‘special case’ for Dasara which is being celebrated in a simple but traditional manner and also restricting the Jumboo Savari to the Palace premises.

Mysuru District Minister S.T. Somashekar told Star of Mysore, “I have already discussed this matter with Chief Secretary T.M. Vijay Bhaskar. In turn, he will write a letter to the Union Home Ministry seeking special permission to allow over 2,000 people to the Palace premises on Dasara procession day.”

“We don’t know what the Government of India will do as there is no decline in Corona positive cases across Karnataka in general and Mysuru City and District in particular in the last one month. Even the State Government is not ready to put any kind of pressure on the Central Government at this juncture. The Centre is expected to make its stand clear in the next 10-15 days,” he said.

He said they have to strictly adhere to guidelines issued by the Ministry of Home Affairs and the State Government has no right to alter it. If the Central Government declines permission, then the Government has no option except to restrict the entry to only 100 persons not only on the Jumboo Savari day but also for the cultural programmes to be held at the Mysore Palace.

“In fact, another set of guidelines as part of ‘Unlock 5.0’ is expected during the fourth week of this month or in the first week of October and then we need to see whether the Government will increase the number of people at the function,” the Minister stated.