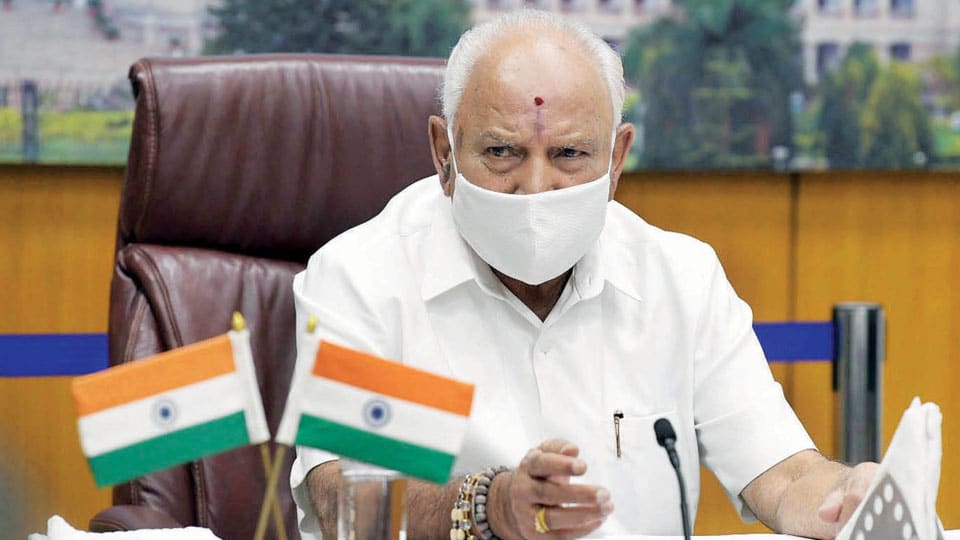 Bengaluru: Breaking his silence for the first time over rumours and reports of change of guard in Karnataka, Chief Minister B.S. Yediyurappa this morning said that he will resign from his post the day the Central leadership of the BJP asks him to. “I will tender my resignation as soon as the same is sought by the leadership,” he said.

He was interacting with the media persons on the occasion of the death anniversary of former Chief Minister, late D. Devaraj Urs in Bengaluru where he garlanded the statue of Urs. 78-year-old Yediyurappa clarified that at present the party high command has reposed faith on him and that he will continue as long as he is able to win their confidence.

“I will continue as the Chief Minister till the day Delhi high command has confidence in me. The day they tell me I have to quit, I will resign and involve myself entirely towards working for the welfare of the State. My stance is clear. They have given me a chance and I am trying to use it to the best of my abilities. Rest of it is left to the Central leadership,” Yediyurappa said when asked about attempts to unseat him by a section of MLAs and his own party members.

When questioned about the purported lack of second rung leaders who can be his alternative, Yediyurappa said he does not contribute to the notion that there is no alternative to him. He insisted that there are always leaders who can step in the shoes of the outgoing ones and they come to the fore when the time and opportunity beckons. In the State too he said there is no dearth of leaders matching him.

“There will always be an alternative in any State across the country. I don’t believe that in Karnataka there are no alternatives. I will continue as Chief Minister till Central leadership has trust in me,” he said. At the same breath, he insisted that he will not comment on public attacks against him by the likes of Minister C.P. Yogeeshwar or quiet attempts to unseat him by a few MLAs of the party.

It may be mentioned here that ever since the BJP high command made it categorically clear that currently the party is in no mood to discuss leadership change, State leaders have been visiting New Delhi. State BJP Vice-President, B.Y. Vijayendra, who is the son of the CM, recently met BJP National President J. P. Nadda and claimed that his zeal has been reinforced as there will be no leadership change.

After him, BJP National General Secretary C.T. Ravi too visited Delhi. Murugesh Nirani, who is one of the aspirants for becoming the CM, also visited Delhi citing personal work. Sources said that if at all there is a leadership change, the high command would prefer Deputy Chief Minister Dr. C.N. Ashwathnarayan or Union Minister Pralhad Joshi for the CM’s post.

If the Lingayat lobby succeeds in wresting the post, it will be Aravind Bellad, Murugesh Nirani or Basanagouda Patil Yatnal. All the three are from Panchamasali sect that is dominant in Karnataka Lingayat community.

Sources also said that the Central leadership has asked the CM to bring down the COVID positivity rate by 5 percent. It is learnt that at this point, the BJP high Command is only focussing on the pandemic and the change in guard will be done later.

3 COMMENTS ON THIS POST To “Will resign if BJP bosses want: CM”