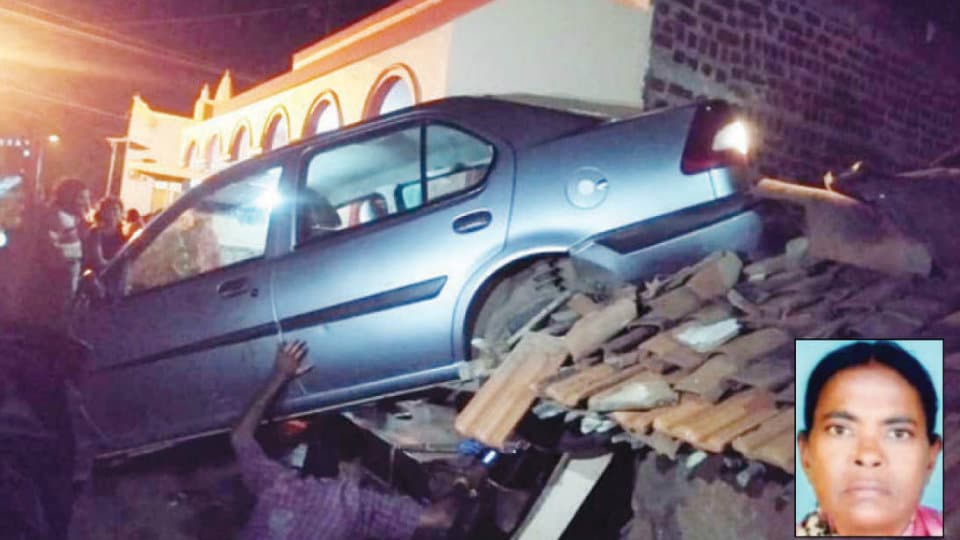 Chamarajanagar:  In a tragic incident, a woman, who was sitting in front of her house, was killed while two others sustained serious injuries, when a car ran over them in reverse direction and climbed the roof of the house at Hale Jalahalli Hundi near Channipura village in Chamarajanagar on Nov.20. The accident has made the villagers and the Police to wonder, how the car was able to climb the roof of the house in reverse direction.

The deceased is Lakshmamma (50), while the injured are Sakamma and Dundamma.

On Nov.20, there was a religious ceremony organised at Lakshmamma’s house and after the ceremony got over, Lakshmamma, along with Sakamma, Dundamma and Sakamma’s daughter were sitting in front of the house and talking at about 9.15 pm. There was a Ford Ikon car belonging to one Rajanna parked in front of the house and Rajanna came to take the car. But Rajanna, allegedly lost control of the car, while moving the car in the reverse direction, resulting in Lakshmamma coming under the wheels of the car. Lakshmamma, who suffered serious head injuries died on the spot, while Sakamma and Dundamma sustained injuries. Luckily, Sakamma’s daughter escaped miraculously.

The villagers, who rushed to the spot, shifted Sakamma and Dundamma to Chamarajanagar District Hospital. The Police have suspected that Rajanna may have given full throttle while moving the car in the reverse direction, which resulted in the accident. It is learnt that Rajanna was not well-versed in driving.

Meanwhile, Rajanna is said to have fled from the spot soon after the incident.

Chamarajanagar Traffic Sub-Inspector K. Deepak and Nagegowda of Town Police Station, who reached the spot, collected information about the accident. A case has been registered and investigation is on.