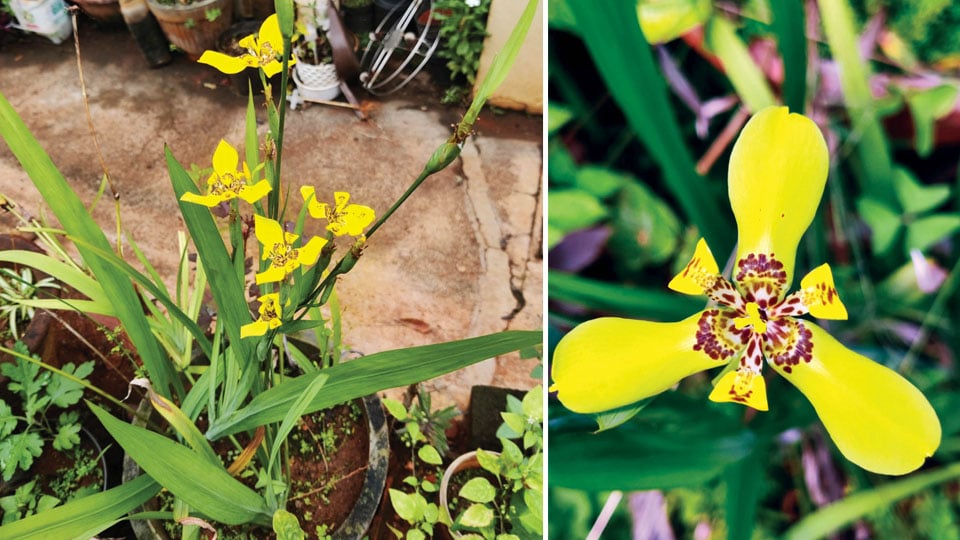 Iris is a general term for more than 250 species of flowering plants. A few among them are called  Walking Irises. The name implies the plants walk. In fact they get the name from the propagation method. When the flowers fade plantlets (baby plants) develop  on extended stems and become heavy as they grow older only to be pushed down to the ground. Then they  root into the soil and grow as independent plants. The domino effect follows resulting in more adjoining area being colonised. This is how the Walking Iris plants “walk” through the landscape. Yellow Walking Iris is one such plant with flamboyant flowers. The plant is commonly called ‘Apostle Plant’ referring to 12 apostles, as some believe the plant needs twelve leaves before it blooms. It is also known as ‘Fan Iris’, ‘Poor man’s Orchid’ besides ‘Martinique trimezia’. It is also called “Hand of God” because of three flower petals. The scientific name is Trimezia steyermarkii (syn. Neomarica longifolia) belonging to Iridaceae family. Genus epithet ‘Trimezia’ is derived from Greek words ‘tri’ and ‘meze’, which mean ‘three’ and ‘greater’ respectively, a reference to the distinctive flowers, whose 3 outer segments are bigger than the inner ones. Species epithet ‘steyermarkii’ is in honour of American Botanist Julian Steyermark. Widely cultivated in the tropics and subtropics, the plant is native to warmer parts of Central and South America and West Indies.

Trimezia steyermarkii is a rhizomatous evergreen or seasonal perennial growing upto 1 meter. The  rhizomes (underground stems) are erect, 2-5 cm long and 2-3 cm wide, with persistent leaf bases, which are usually fibrous. The  leaves are lance or sword shaped (ensiform leaves); thin textured with a prominent mid-rib closely resembling  those of the genus Iris. Flowering stems are slightly shorter than the leaves, round, usually with few branches and herbaceous spathes (sheathing bracts); occasionally simple. The plant sports yellow coloured flowers; tepals (petals) 6, outer 3 spreading  almost horizontally and the remaining 3 curled inner, arching forward and then recurved (geniculate). A cluster of elaiophores (glands) near the base add a pop of texture to the basal central portion of the bloom. The petals are embellished with brownish-purple bands/ spots (mahogany markings) at their base resembling tiger stripes which make the flowers look glitzy. Stamens 3, distinct or connate; Ovary inferior, carpels 3, tri-locular with axile placentation & 3-branched style; The fruit is a loculicidal capsule. Though the plants bloom over a long period, the individual flowers are short lived (only for a day).

The buds open immediately after 9 am (between 9 and 9.30 am). Experience the magical unfolding of the  petals, a visual treat!