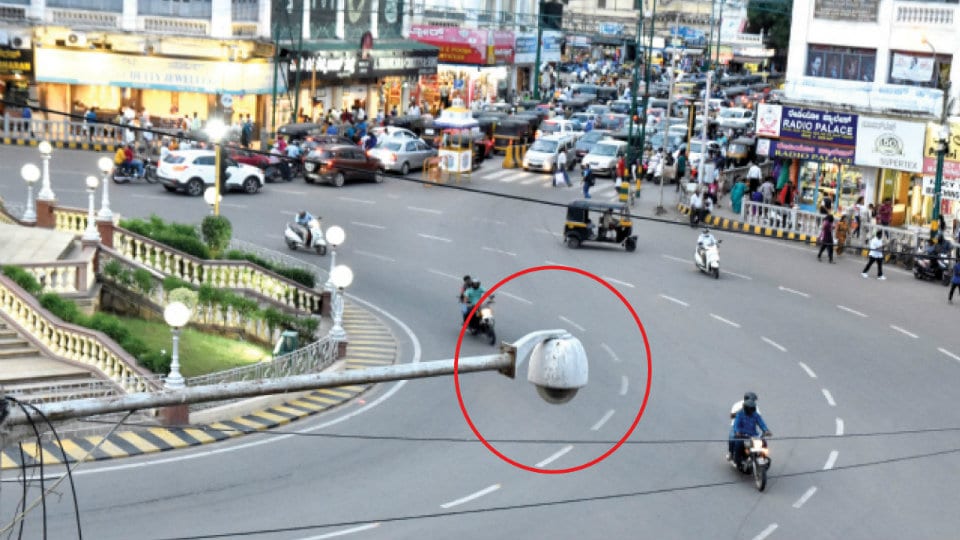 One CCTV camera every 25 metres to prevent sabotage

Mysuru: Like previous years, this Dasara too will be a fool-proof Dasara and the city Police have taken measures to ensure that the festival passes off smoothly and is crime-free. And for this, they have relied on technology and have procured 199 special CCTV cameras from private agencies in addition to the 64 cameras spread across the city.

All visuals captured by these cameras are monitored at the Automation Centre set up at the City Police Commissioner’s Office and staff and senior officers are constantly visiting these centres. Any illegal activity is captured live on the cameras. The special 199 cameras will be installed at vantage points on the Jumboo Savari route from Mysore Palace till Bannimantap.

It is a five-kilometre stretch and if 199 cameras are installed on the Jumboo Savari route, that means there will be one CCTV camera for every 25 metres. This is to ensure that it will be an incident-free Dasara where there is tight control of law and order.

The cameras will help the Police keep tab on crowds and pick-pockets. In addition, the cameras will enable the Police to detect transport of ammunition, explosives, hard cash and other materials from one place to another and gather information on suspicious persons entering the city. Such information can be effectively used to foil terror strikes and sabotages.

In addition to the 199 cameras, visuals from 64 cameras installed across the city are being monitored 24×7 at the Automation Centre.

Eight to nine giant screens have been set up at the Centre and teams of officers are keeping a close watch on the screens. Information will be immediately passed on to the jurisdictional Police and Police patrol teams in case of trouble and the respective Police teams can intervene and round off the trouble-makers and suspicious persons.

This apart, the full-fledged Mobile Command Centre vehicle will work round-the-clock this Dasara to respond to any emergencies. This state-of-the-art Command Centre was used for the first time last year and the Police have been using that vehicle in city ever since. The Command Centre, on which Rs.2.16 crore has been spent, helps surveillance especially during bigger events like Dasara. Equivalent to a thousand eyes within a large area, the Command Centre (a hi-tech vehicle, which has all the features of a Police Control Room) will be on the move to capture all the action, live at all the places where it is stationed.

19 cameras and a drone

The Command Centre has 19 cameras including four around the mobile unit, four jacket cameras and a drone camera. The mobile unit could effectively do the work of over 50 Police personnel on ground. It would be easy to keep vigil on activities of miscreants. The drone camera can take high-resolution photos of the ground even from a height of 300 metres and can cover a distance of half-a-kilometre.

The Command Centre vehicle has four fixed cameras at the top and one zoom camera that can capture images and visuals up to one kilometre radius. Photos and live visuals can be relayed to the Control Room at City Police Commissioner’s Office.

The vehicle can house 30 Police personnel inside at a time and during Dasara, the Command Centre vehicle will be used at places where there will be maximum crowd such as Yuva Dasara, Vijayadashami procession and the Torchlight Parade.