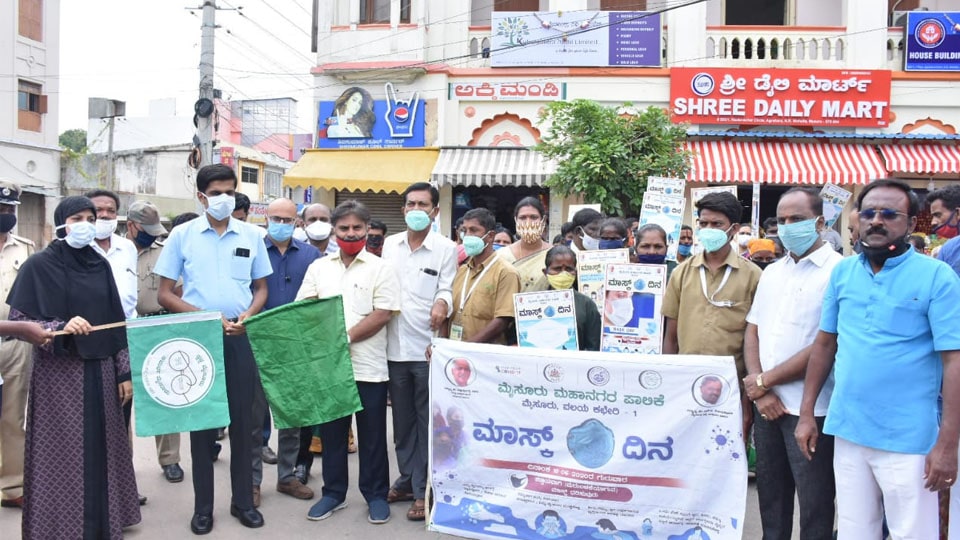 Mysore/Mysuru: As directed by the State Government to observe June 18 as Mask Day in order to create awareness among the public on the importance of using face masks, the Mysuru City Corporation (MCC) and various Departments including Health, KSRTC, Library and Police, took out Jatha at several locations of the city, keeping in mind the COVID guidelines with minimum attendance.

Mysuru City Corporation (MCC): Deputy Commissioner (DC) Abhiram G. Sankar flagged off the Jatha organised by the MCC at Agrahara Circle this morning. It was attended by nearly 40 members including MCC officials and Pourakarmikas, officials from Red Cross institution. They took out jatha covering areas around Agrahara Circle holding placards with a message on importance of wearing masks.

Speaking to media on the occasion, DC Abhiram G. Sankar said, “Following directions from the State Government, Mask Day was being celebrated by various Departments and institutions.”

On COVID cases, he said “The positive case reported yesterday is a Bengaluru returnee who was a BMTC driver. He was under home quarantine and had fever. He is a resident of Haduvinalli in Nanjangud. After relaxation of lockdown rules, more cases are expected and we are taking all measures to handle that. So far, a total of 29 home quarantine violation cases have been reported in Mysuru district.”

“PUC exam is on today and soon SSLC exams will begin. In this view, we have called a meeting of all the Departments including Education, Health and Police, tomorrow with regard to the safety measures to be in place during the conduct of exams,” the DC said.

To a query on International Day of Yoga, he said that decision has not been taken yet about using helicopter to record the ‘Virtual Terrace Yoga.’ “As using helicopter would cost more and as we have drone facility, we are thinking about that and we are yet to decide,” he added.

Dr. Venkatesh, speaking to media, said: “Mask usage not only prevents Corona but also contains the spread of TB. It is a good practice to use mask. Mysuru positive cases are being reported from those coming from outside and we are taking precautionary measures.”

KSRTC Mysuru Rural Divisional Controller R. Ashok Kumar, who spoke said: “Mask is very useful in containing Corona. We have given masks to all our staff and are also using sanitisers. Our staff are thermal screened every day and long route buses are provided with sufficient sanitisers and masks.”

Lashkar Inspector Suresh Kumar and others were present.

Mayor Tasneem flagged off the Jatha organsied in front of the City Central Library near Ayurveda College Circle which was attended by the Library Department staff. The Jatha passed through Sayyaji Rao, K.R. Circle and concluded at Kote Anjaneyaswamy Temple, Palace North Gate.

The jatha held by the Health Department near Rajendranagar Arch Circle was flagged off by DHO Venkatesh. Health Department officials and ASHA activists, held banners on mask usage, took out jatha at Kurimande Circle and other areas. Masks were also distributed on the occasion.

City Police Commissioner is seen flagging off the Mask Day rally of NR Police in front of Government Ayurveda College and Hospital Circle in city this morning.

Picture below shows a staff dressed as ‘Yama,’ the God of Death in Hindu mythology, stopping a two-wheeler rider to make her wear safety mask and then proceed.

District Disability Rehabilitation Centre (DDRC), Mysuru, in association with the Department of Empowerment of Differently Abled and Senior Citizens and Indian Red Cross Society too observed Mask Day. All the staff of DDRC wore mask and took part in awareness jatha on using masks.

One of the staff of DDRC demonstrating the simple ‘zero-touch hand-washing facility’ installed by Indian Red Cross Society at the premises of DRCC, following the COVID outbreak, to make sure that everyone visiting the Centre keeps their hands clean before entering the centre.

2 COMMENTS ON THIS POST To “Awareness Jatha marks Mask Day”