Chamarajanagar: Grand plans are afoot to promote tourism in a big way in Chamarajanagar, Mysuru and surrounding areas. Be it a cable car above Bharachukki waterfalls at Kollegal or eco-tourism at Bandipur Tiger Reserve looking at the interests of both tourists and wild animals, concrete plans are being made to boost the tourism sector.

Notably, the plans are on in such areas where there are no basic facilities for tourists. Chairing a meeting of stakeholders and officials from various Departments at Chamarajanagar Deputy Commissioner’s Office  last evening, Tourism Minister S.R. Mahesh unveiled some of the plans to give a fillip to tourism.

At the meeting, the Minister announced that a cable car facility will be introduced at Bharachukki Falls in Kollegal taluk, Chamarajanagar district at a cost of Rs. 50 crore. A detailed project report has been prepared in this regard to attract tourists throughout the year to the Falls.

Gaganachukki (Malavalli Taluk in Mandya district) and Bharachukki in Kollegal are together known as Shivana-samudra Falls. Tourists throng the spot to capture River Cauvery cascading from a height of 98 meters and installing a cable car will give tourism a further boost.

The Minister told the meeting that usually, tourists visit Gaganachukki and Bharachukki only when the waterfalls are in its full glory. Having a cable car can attract tourists all through the year as they can witness the beautiful scenery from the top, he felt. 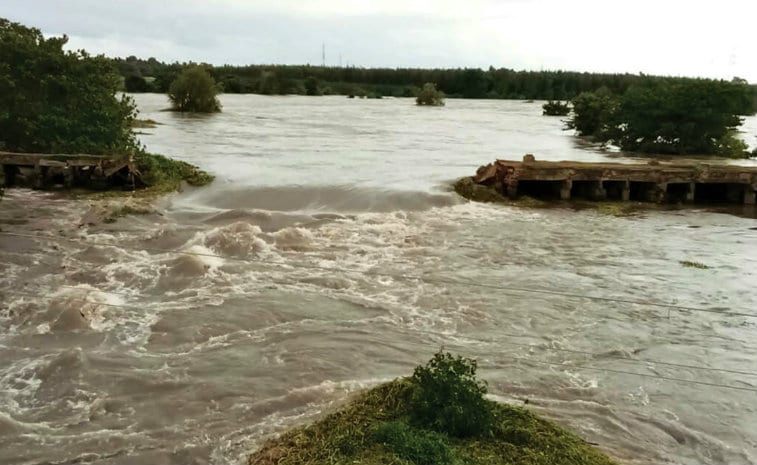 Lushington Bridge in Kollegal that was washed away in July.

The government will also renovate the Lushington Bridge in Kollegal, which was washed away in the recent rain. This was the oldest heritage stone bridge in the erstwhile princely State of Mysore that was constructed in 1818 at Shivanasamudra near Madhyaranga across River Cauvery. It was washed away on July 17 in the gushing floodwaters of River Cauvery.

The 400-metre bridge is called the Wellesley Bridge by the locals. But historical references say that while initially the bridge was named after colonial administrator Lord Richard Colley Wellesley, it was renamed as Lushington Bridge in 1835. Also, this bridge looks similar to Wellesley Bridge at Srirangapatna.

Minister Mahesh said that in four months, Rs. 10 crore has been released for the development of tourist spots in Chamarajanagar. He said that the previous government had released Rs. 6.15 crore for Chamarajanagar tourism development from 2013 to 2018. “We have released Rs. 10 crore in just four months. The government is ready to release more money but the officers must ensure that the money is fully utilised for the benefits of tourists and tourist places,” he said.

Minister Mahesh took objection to the Forest Department not allowing tourists to have a full view of Bharachukki Waterfalls though steps and tourist viewing platforms have been specially constructed. Following several complaints from tourists, the Minister had directed the officials to allow tourists to see the waterfall from the second level of steps.

At the meeting, Bandipur Tiger Reserve Director Ambadi Madhav suggested that the Safari start point and the ticket counters must be shifted to Melukamanahalli instead of the present place. This is in the interest of eco-tourism where the interests of both wild animals and tourists are kept in mind.

The present safari start point location is inside the core forest area and wild animals frequent the place despite the area having so many buildings and frequented by human beings, Madhav told the Minister.

He informed that a Rs. 8 crore project is being prepared to shift the location and urged the Minister to immediately release Rs. 2 crore for the project. The project report will be ready in 15 days, he said. Minister Mahesh responded positively for the suggestions and agreed to release the money.