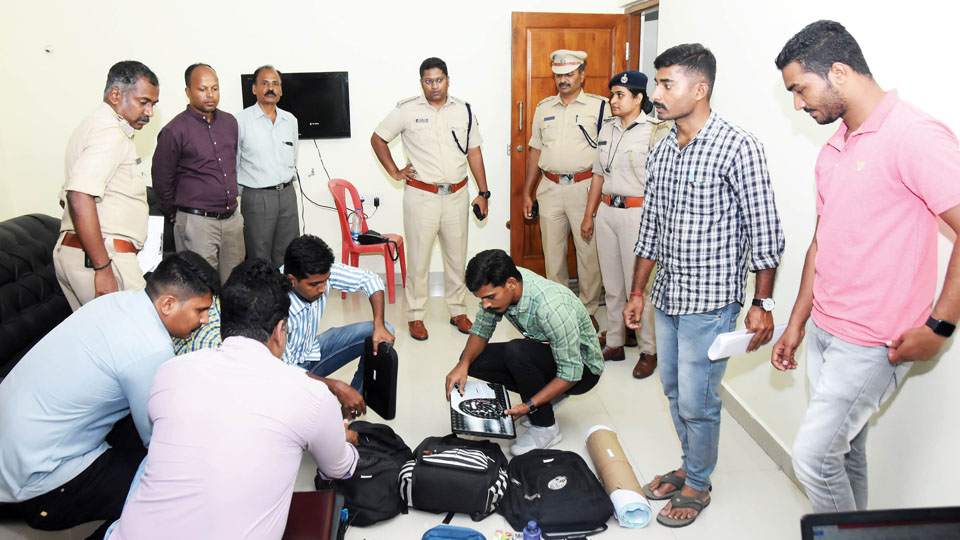 Mysore/Mysuru: Cracking down on property fraudsters, the City Police have busted a racket that sold Government and private properties to other persons by fabricating documents. Fake owners were created to sell land owned by different persons and also to obtain loans from banks and financial institutions.

Three persons have been arrested and the Police have recovered office seals of various departments and officers, fake e-stamp papers, laptops, printers and mobile phones.

The gang operated from a service apartment in Ramakrishnanagar. Initial investigation revealed that the gang had sold land owned by the father of Bengaluru’s Shivajinagar MLA Rizwan Arshad, to two people after fabricating documents. A case was registered at Metagalli Police Station last January.

In the second case, three persons were trying to obtain a bank loan on a Mysuru Urban Development Authority (MUDA) site measuring 80×100 at Yadavagiri. Sensing a fraud, MUDA Commissioner had lodged a complaint at Lakshmipuram Police Station two years ago.

The site fraud involving MLA Rizwan Arshad’s father came to light when an application was filed in the Taluk Office to change the RTC. In the case of the Yadavagiri plot, it was established that the records were fabricated when the land records were examined by the legal advisor of a bank.

When the Police began investigating the cases registered at Metagalli and Lakshmipuram Police Stations, they found that only one kingpin was involved in both cases and had spread a dragnet to arrest him. But as the accused person used to change his mobile numbers frequently, the Police could not track him.

Meanwhile, yesterday, the Police received a tip-off that the kingpin was operating from room number 301 in Golden Bells service apartment on Vishwamanava Double Road in Ramakrishnanagar. A team led by Deputy Commissioner of Police (Law and Order) Pradeep Gunti, ACP S.E. Gangadharaswamy and Kuvempunagar Inspector Gopal raided the apartment.

READ ALSO  No business activities after 6 pm till Apr. 14

During the raid, the Police team found that three persons indulged in the job of fabricating documents and arrested them. Official seals of officers from MUDA, Taluk Office and Banks were seized along with computer and laptop peripherals. Police said that the gang targeted gullible senior citizens, retired persons and illiterates as fabricated documents were presented in such a way that they are original ones.

R.Q. Arshad, the father of Shivajinagar MLA Rizwan Arshad, had purchased three acres of land on Oct. 22, 1980, at Shyadanahalli Survey Number 64 from one Thimmegowda and Chikkanna, the sons of one Jawaregowda. When the land became a Podi, it came under Survey Number 133 and was mentioned in the RTC.

After fabricating documents, the three-acre land was sold to Durgaprasad and Kumar on Oct. 31, 2021. The fraudster even brought a person to impersonate Jawaregowda to make believe that he is the actual owner of the land and is now selling the same.

After paying the money, Durgaprasad and Kumar applied to the Taluk Office for a change in RTC documents and to transfer the same land to their possession. The Tahsildar’s office quickly found that the documents were fabricated and that Jawaregowda was not the owner of the land. Instead, R.Q. Arshad was the owner.

READ ALSO  KSCA Cricket Stadium for city back in focus

One Mohammad Nayeem of Ghousianagar, Guide Mubarak Sharif of Rajivnagar and Shahjahan of Udayagiri had applied for a property loan in State Bank of India using fake documents with regard to an 80×100 MUDA site at Yadavagiri under Survey Number 152.

Before approving the loan, the bank had sent the property papers to its legal advisor Smiththa Devaiah, who unearthed that the land documents were not issued by MUDA but were fabricated and the land was owned by MUDA. On Dec. 31, 2020, the then MUDA Commissioner Dr. D.B. Natesh had filed a complaint at Lakshmipuram Police Station.

Public who buy properties must verify the documents before making a purchase and must not be fooled by signatures and seals of officers and institutions like MUDA or Taluk Offices as there are chances of fraudsters faking documents. The documents must be verified with competent authorities and if care is not taken, then the buyers will have to face criminal cases. If cheated, lodge a Police complaint immediately. — Pradeep Gunti, DCP (Law and Order)