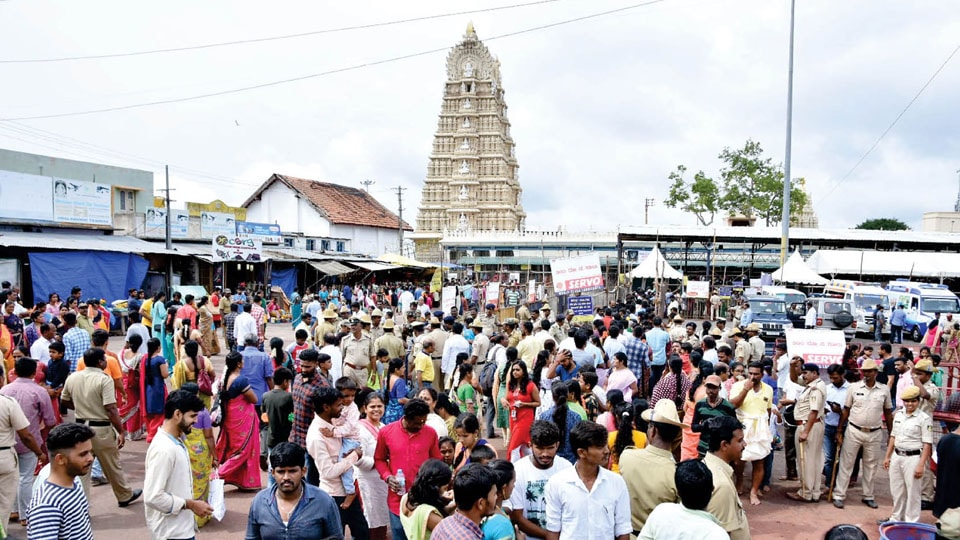 Mysuru: Even as the JD(S)-Congress Coalition Government is tottering following the resignation of 18 MLAs, PWD Minister H.D. Revanna found time to visit Chamundeshwari temple atop the Hill this morning on the second Ashada Friday and offer special prayers to the deity.

Revanna, who arrived at 7 am, was inside the temple for about 20 minutes and performed Sanklpa Puja, praying for the survival of the Coalition Government headed by his younger brother H.D. Kumaraswamy.

Later, speaking to press-persons, Revanna said that Chief Minister H.D. Kumaraswamy has the blessings of Goddess Chamundeshwari and he will continue as the Chief Minister.

Pointing out that he has offered prayers to the deity in the name of his brother, Revanna reiterated that Chief Minister has the blessings of the almighty and the Coalition Government will continue with stability.

Replying to a question on Tourism Minister S.R. Mahesh’s reported meeting with BJP leaders at a Guest House in Bengaluru last night, Revanna said he was not aware of the meeting and as such he cannot comment on it.

Asserting that there is no question of JD(S) joining hands with the BJP to form Government, the PWD Minister maintained that the Coalition Government is stable and will complete its term.

However, there was a rush of devotees at the footsteps, where they were seen making a beeline to climb the steps right from the early hours of today.

The puja began as early as 3 am with performance of Mahanyasa Abhishekha, Pushparchane and other rituals.

Dr. Sooraj Revanna, elder son of Minister Revanna,  too arrived at the Hill temple a couple of hours after his father had left and performed special puja to the deity. He was accompanied by a few local JD(S) leaders.

The KSRTC will operate free bus service from Lalitha Mahal Helipad, where the devotees are required to board the buses to go the Hill temple, till 8 pm tonight.

However, the regular KSRTC city bus service operating from the city bus stand will continue till 10 pm for the benefit of Chamundi Hill residents, according to KSRTC sources.

Durga Agency from Coimbatore distributed Prasada to the devotees. The agency, which has also taken up the responsibility of decorating the temple on second Ashada Friday, has been doing so for the past 10 years.

The Police have provided tight security all around the temple.