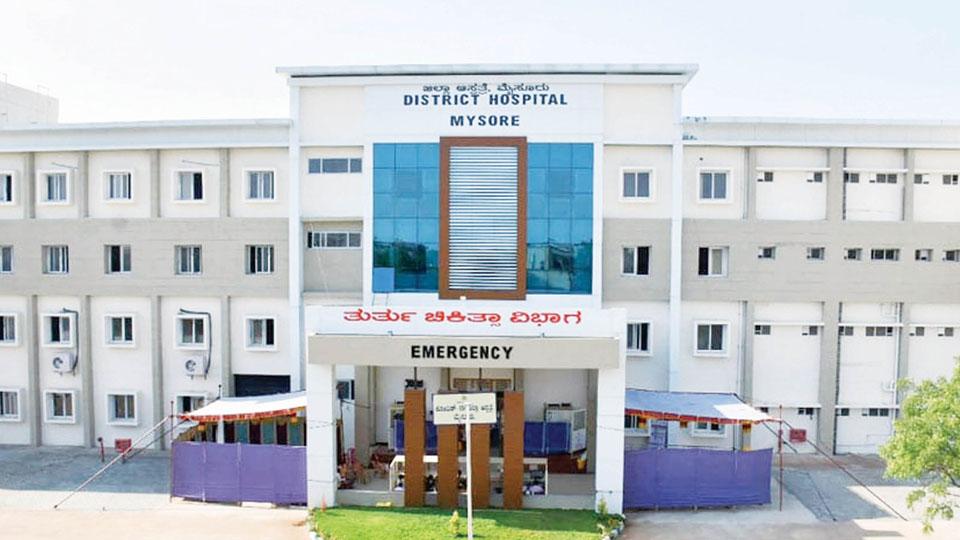 Mysore/Mysuru: With spiralling cases of COVID-19, the focus remains on treatment as well as prevention of the deadly virus that is said to have its origin from a seafood market in China’s Wuhan. The key is to focus on building one’s immunity as well as overall health.

At the designated COVID Hospital on KRS Road in Mysuru, ISKCON Mysuru (International Society for Krishna Consciousness) has been authorised by the State Government to supply food to the patients. The hygienic food is brought in special containers mounted on customised vehicles and is supplied to the patients three times a day apart from the evening snacks.

The diet plan is as per the chart issued by the State Government that has asked the district administrations to provide quality and nutritious food on time, as suggested by dieticians. According to the Government order, breakfast is being served at 7 am, lunch at 1 pm and dinner at 7 pm.

Patients eat ‘rava idli’ for breakfast on Monday, ‘pongal’ on Tuesday, ‘set dosa’ on Wednesday, rice idli on Thursday, ‘bisi bele bath’ on Friday, ‘chow chow bath’ on Saturday and ‘set dosa’ on Sunday. As refreshment after breakfast, the Health Department made arrangements for one fruit a day such as watermelon, papaya, musk melon, which will be served on alternate days.

READ ALSO  Liquid oxygen units to be established at all Government Hospitals: Minister

250-bed facility; more to be added

There are 250 beds in the Hospital and the District Administration has planned to limit the patient number to 200. 50 beds will be kept for emergency purposes.

After this facility is filled and in case there is a spike in cases, the new building of the ESI Hospital on KRS Road will be used where there are 100 beds. In case the infection rate increases, the Extension Centre of Karnataka State Open University near Mysore Airport at Mandakalli will be used.

The KSOU Centre is being converted into a 500-bed facility by the Nirmithi Kendra. There are plans to also use the PKTB Hospital on KRS Road that has a vast campus and also has many rooms that can be used as isolation facilities, Health Department officials told Star of Mysore. The ESI, PKTB and KSOU facilities will be used only if the cases see an upward trend.

As of now, the numbers are less. Every day, over 500 throat swab samples are being tested at the Viral Research and Diagnostic Laboratory (VRDL) at the Department of Microbiology in Mysore Medical College and Research Institute (K.R. Hospital) and the private COVID-19 laboratory at JSS Hospital. In the tests, over 15 to 30 cases are emerging daily. “We are managing the numbers as the patient discharge rate is high at present. In case the infections spread beyond the capacity, private hospital facilities will be used,” officials said.

The surge in the number of cases in Mysuru is attributed to the returnees from Bengaluru. “As there is a huge spike in the infection rate in State Capital, many natives of Mysuru are returning from Bengaluru. Some have even shifted the place of residence from Bengaluru to Mysuru. This is where we are seeing the spike. Also, the infection is spreading from casual visitors to Bengaluru and their contacts,” officials said.

Officials said that there is no shortage of Personal Protection Equipment (PPE) to all healthcare workers serving in Government facilities. “We might face a shortage of ventilators in case there are more cases with severe respiratory issues. As of now, in the Hospital, there are eight patients in the ICU and two are critical,” officials added.