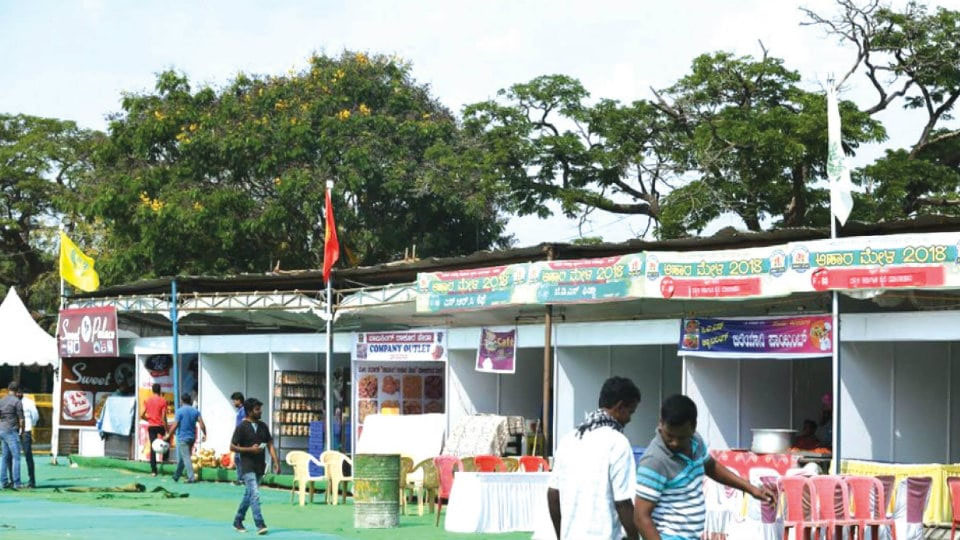 Mysore/Mysuru: The Dasara Aahara Mela-2022 (food festival) from Sept. 26 to Oct. 4 at Scouts and Guides Grounds and at MUDA Grounds near Lalitha Mahal Palace Hotel is expected to thrill food enthusiasts as the event promises a variety of exciting and lip-smacking food from different parts of the State and country including the traditional tribal food.

Apart from the above two venues, plans are afoot to open food stalls at each of the Dasara programme venues. This is to popularise Dasara’s food aspect — apart from focussing on the art and cultural aspect — and reduce the burden on Scouts and Guides Grounds and the MUDA Grounds. A grand Dasara means a host of events like Yuva Dasara, Mahila Dasara, Makkala Dasara, Raitha Dasara, Sports Dasara, Pusthaka Mela, Krishi Mela etc. Plans are being worked out to set up food counters at these venues also. These stalls will be opened through the Dasara Aahara Mela Sub-Committee.

For foodies, the Aahara Mela is a great chance to get on a delectable journey, discovering and relishing an assortment of Indian and continental culinary. With chefs from across the State putting up a sale of a variety of foods with rich aromas to elusive and simple flavours, the fair is an excellent place for all those who visit the venue, to stimulate their taste buds.

Usually, the Aahara Mela is frequented by people after witnessing several Dasara programmes on their way back home. But every year, all roads that lead to the Aahara Mela are choked with traffic and many do not make it at the right time. Also, they will not get a place to park their vehicles and have food peacefully. As such, many return home hungry.

“Even local people do not go to all Dasara programme venues every day. They usually plan their routine and then choose the events for a particular day or a particular evening. Having food counters at all the venues will be convenient as they can eat and go home. All those who are particularly headed towards Aahara Mela can go there,” Joint Director of Food and Civil Supplies Department Kumuda Sharath told Star of Mysore.

“At times, during lunch and dinner hours, the Aahara Mela gets extremely crowded and this leads to chaos. Owing to confusion, many people stay away from food stalls. We are planning to avoid this,” she added.

The Department has written to different Dasara Sub-Committees seeking feedback on the types of food stalls they are looking at, availability of space, demand and other aspects. “Once we get feedback, we will allow the space as per the requirement and those who apply to participate in the Aahara Mela will be allotted,” Kumuda said.

While there will be 90 to 100 stalls at the Scouts and Guides Grounds, there will be 50 to 70 food stalls at MUDA Grounds. “Waterproof pandals will be set up to prevent rains going by the experience of previous years. We have written to the Officers of Food and Civil Supplies Department of all districts to invite participation from unique food styles known in those regions like tribal food, North Karnataka dishes, coastal food and the special food of Mysuru region,” she revealed.

This apart, regular cultural programmes will be held at the Mela venues and there will be competitions for people to display their culinary skills. Eating competitions will also be held and prizes will be distributed.