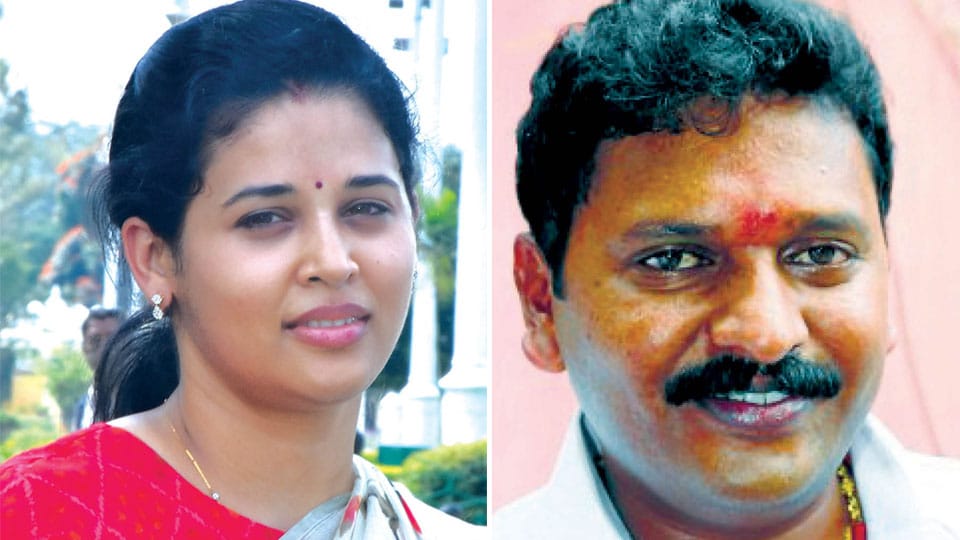 Mysuru: Deputy Commissioner Rohini Sindhuri and Hunsur Congress MLA H.P. Manjunath have locked horns with both launching salvo against each other.

It all started in the recently held KDP meeting presided over by Co-operation and District Minister S.T. Somashekar, when Manjunath accused the DC of not answering to his telephone calls and also not clearing projects pertaining to development of Hunsur taluk. Not stopping here, the MLA had advised Rohini not to act as the ‘third Maharani’ of Mysuru since there are two ‘Maharanis.’ He also accused her of breaching protocol by not inviting him for the flagging off ‘Gajapayana’ at Veeranahosahalli which comes in his Constituency.

Though she kept mum, Mysuru-Kodagu MP Pratap Simha and Minister Somashekar not only defended her in the open meeting but also refuted allegations of ‘neglecting’ his Constituency just to please the ruling BJP.

Two days after the meeting, Rohini Sindhuri has come out with a strong rebuttal to every allegation levelled against her by the MLA. She said it was not wise on his part to make such statements in the open meeting.

Reacting to Manjunath’s charges that she does not respond to his memorandums and letters, the DC, in a letter to MLA Manjunath, has said “I assumed charge on Oct. 1 and since then I have not received any letter pertaining to development of your Constituency. However,  what I have received is an application in your name seeking land conversion for 21 Survey numbers in Kergalli village, Jayapura hobli of Mysuru district. Documents such as High Court order dated Sept. 14, 2020 and files concerning land conversion are being looked into from legal angles. Measures will be taken to dispose of files as per law.”

With this, she has brought to light that the MLA had submitted application only for land conversion and not for development works in Hunsur taluk.

For not extending invitation to Gajapayana, Rohini said “Dasara High Power Committee meeting presided over by Chief Minister B.S.Yediyurappa on Sept. 8 decided to celebrate Dasara in simple and traditional manner. I was advised to form District-level Executive Committee to chalk-out programmes for Gajapayana event too. The Sept. 12 meeting authorised the district-level officials to hold Gajapayana event by not inviting any elected representative. So, the Gajapayana was held on Oct. 1 after offering puja to Dasara elephants. Since it was the decision of District-level Executive Committee, there has been no breach    of protocol.”

The DC has said “after taking charge, I had visited the Office of Assistant Commissioner of Hunsur taluk, Taluk Office, Taluk Hospital and Covid Care Centre and also held review meeting. Upon enquiring about you, I was informed that you are not keeping well. For this reason, I was unable to discuss development of Hunsur with you (MLA)”,  she added.