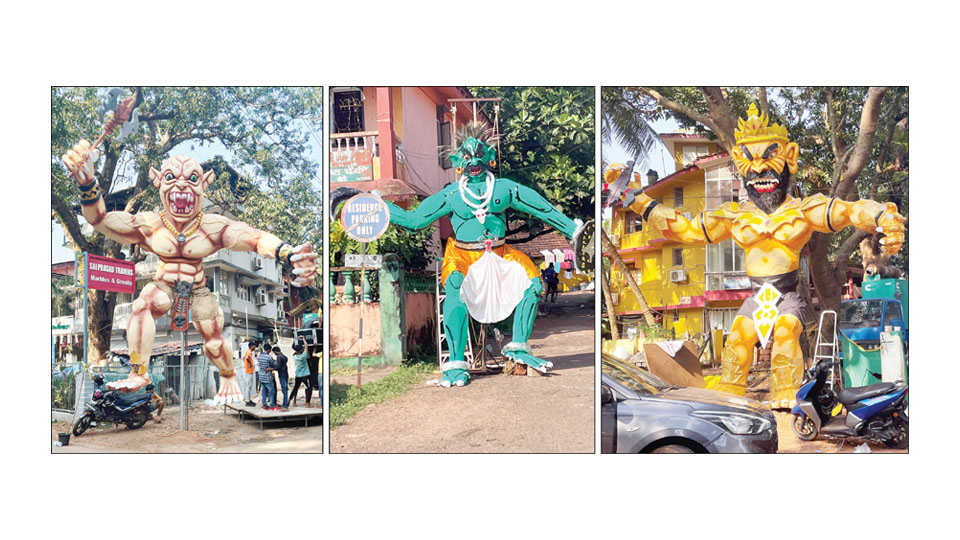 I have heard, read and seen on TV Ramlila being played during Dasara as part of the festival celebration. In Delhi there is the famous Ramlila Maidan where Ramlila is held annually as a public celebration attended by VIPs and the public at large.

The most awaited part of the proceedings is the Ravan Dahan, killing of Ravan, the demon King of Lanka, by setting fire to his effigy loaded with firecrackers.

To my utter surprise, a similar celebration of Deepavali festival was witnessed by me in Goa. It was a surprise to me because though I have visited Goa in the past a few times, I never went there during Deepavali and as such there was no occasion to witness the way Goans celebrate Deepavali. As we drove around we could see at every small town or village, huge, giant-sized effigies of the mythical demon Narakasura, some call him Mahishasura, being readied for the inevitable fiery killing of the demon on Naraka Chaturdashi day, nay at dawn, amidst lot of fireworks. It symbolises Lord Krishna killing the demon, just as Ramlila symbolises Lord Rama killing Ravan. In essence, it symbolises victory of good over evil.

Goan people seem to be more creative than those who work on Ravan’s effigies in the North. Each effigy of Narakasura is so different in its size, colour, physic, weird facial expression with fang-like teeth, holding lethal weapons and made of plaster of paris. (see some photos that I clicked).

If some are stationary, some are mounted on vehicles ready for the procession. Real scary and ghoulish creatures come from the netherworld!

READ ALSO  TIME to know the world’s most influential people

I was awestruck, staring at them giving a pause to the moving car. Suddenly a thought crossed my mind — if Rama killing Ravan could be symbolically played at Ramlila Maidan in Delhi, if Krishna killing Narakasura could be symbolically played in Goa in a fiery manner, why not Chamundeshwari (Goddess Durga) killing Mahishasura symbolically be played in Mysuru? It is entertainment for the people, work for the artists and commerce for businessmen. Any takers?

For me this was in sharp contrast to the famous Goan Carnival that attracted people from other parts of the country also. Why not? Where there is fun, frolic, Fenny, wine, cake, pork vindaloo, music, dance, gals and guys, the carnival is a powerful magnate. However, Deepavali seemed to be more of local interest. Goa is a place for holiday hunters with multiple attractions where one is never starved for entertainment. There are many options to choose from. Like in Las Vegas, though in a very small scale, including casinos.

Tailpiece: According to one version of the mythology Durga kills Mahishasura and Rama kills Ravan during Navarathri and Dasara. If so, why not have Durgalila in Mysuru, like Ramlila, asks a wag. Selected Narakasura effigies could follow the Dasara procession at the tail end to be burnt down at Bannimantap presenting a grand, fiery spectacle to the audience. Howzatt?