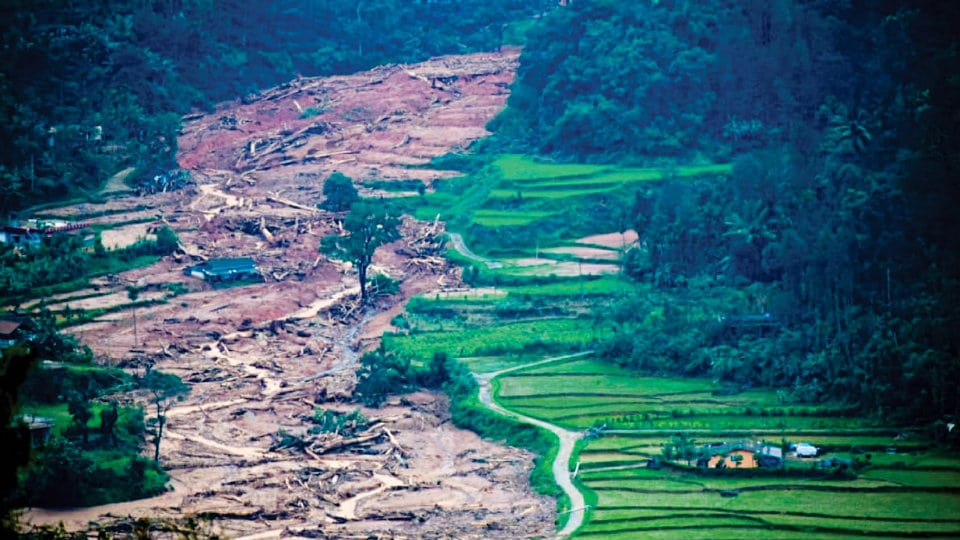 Mysuru: A report by the Technical Team of The Institution of Engineers (India), Mysuru Local Centre, has identified the causes for the recent destruction in Kodagu by catastrophic floods and landslides.

The report has pointed fingers at indiscriminate development, cutting of trees, unregulated road construction and property development coupled with heavy to very heavy rainfall and has described the destruction as man-made.

The initiative of preparing such a report was taken by Hunsur MLA A.H. Vishwanath, who is also the State JD(S) President. He had called a meeting on Aug. 25 and had asked the Institution of Engineers to throw light on the causes of floods and landslides and suggest ways and means to stop future calamities.

The Technical Team was headed by Major General (Retd.) S.G. Vombatkere and has 11 members. The report, that has been prepared after extensively studying the topography of Kodagu and assessing the damage, has been submitted to the State Government for consideration and action.

The team visited the sites of damages to the arterial roads in Kodagu on Aug. 26 to assess the damages and the possible causes for landslips which interrupted road transportation including National and State Highways.

The team visited several sites on National Highway 275 and State Highway 27 where landslips had occurred due to extremely heavy rainfall. Studying the land patterns, the team observed that soil-and-vegetation-covered slopes which were stabilised over millions of years in Kodagu have been destabilised by deforestation for timber harvesting, levelling for agriculture, or cutting of earth across slopes for road or building construction.

The report states, “From the Technical Team’s site inspection, interaction with technical and residents and availability of information from the media, large-scale destruction in Kodagu over the last few years appears to be the cause for massive landslides. Also, the combination of man-made causes (development  interventions like road construction and property development) and extremely heavy and prolonged rainfall has caused extensive damage.”

“Deforestation has been happening over the decades due to human incursions into the Western Ghats (Kodagu is part of Western Ghats) for reasons like road construction, power transmission lines, ore mining, stone quarrying, sand mining, ground water extraction, change of land use from forest to agriculture or human settlement, tourism, etc. Deforestation has been occurring gradually and incrementally as well as on a larger scale for government-sponsored infrastructure projects,” the report observes.

Besides affecting rainfall patterns, deforestation in Kodagu seriously affects the surface and subsoil water capacity of the Cauvery River basin. This represents a threat to the water security of all people of the four States in the Cauvery basin — Karnataka, Tamil Nadu, Kerala and Puducherry — the report says.

The experts believe that large-scale destruction in Kodagu could have been averted if the recommendations of the Madhav Gadgil Committee (2011) on Ecologically Sensitive Zones (ESZs) of the Western Ghats had been implemented. The subsequent Kasturirangan Report on the Western Ghats recommends substantially milder measures. Even these have been rejected by all States — Kerala, Karnataka, Tamil Nadu, Goa, and Maharashtra — of the Western Ghats, the report states.

In order to prevent recurrence of large-scale destruction, the Committee recommends that the State Government should consider taking some urgent measures in addition to all measures for relief, rehabilitation and reconstruction in Kodagu.

It has called to put an end to all infrastructural projects which threaten the ecology of the Western Ghats. The Committee has recommended for a complete stop on ore-mining and sand-mining. It has called for action against polluting industries or activities.

The Committee has recommended that no permission must be accorded to Special Economic Zone(s), and conversion of public lands into private ownership must be banned.

2 COMMENTS ON THIS POST To “Deforestation, heavy rainfall caused destruction in Kodagu: Report”