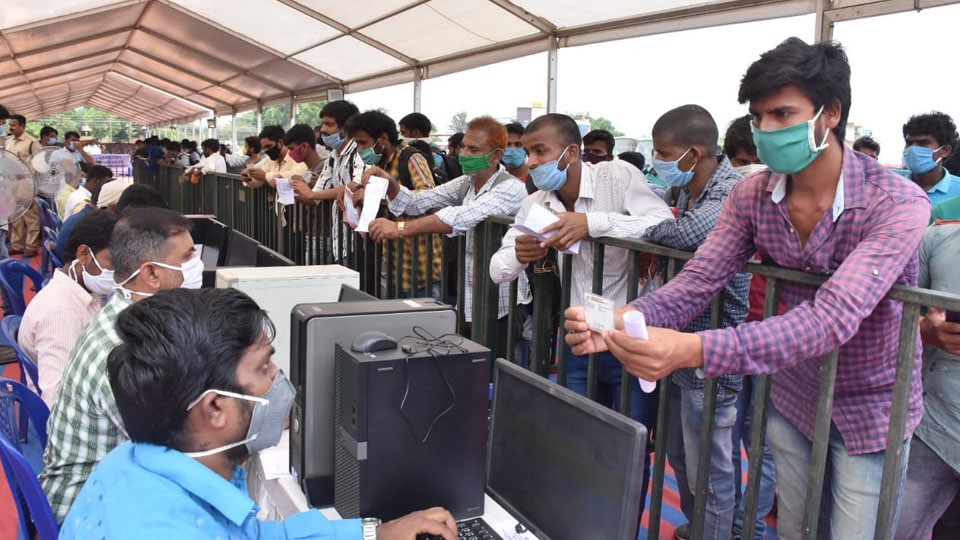 First migrant special train from city chugs to UP

3,000 people from Uttar Pradesh stranded in Mysuru to reach homes in Shramik Special

Mysore/Mysuru: The fervent appeals by thousands of migrant workers from Uttar Pradesh (UP) to permit them to return to their native places has been realised today with the State Government facilitating them to travel by train from city to their home State.

They were stranded in Mysuru during lockdown with no jobs and means of livelihood and they depended entirely on the food that was donated by donors, NGOs and volunteers. Today, the first batch of about 1,520 migrant workers left Mysuru for Gorakhpur in Eastern UP in a Shramik Special train from Ashokapuram Railway Station this afternoon.

The Shramik Special train services are being operated to transport migrant workers, tourists, pilgrims, students as well as others who are stranded in different places.

Over 3,000 migrant workers from UP were housed in various temporary shelter homes across the city by the District Administration following the COVID-19 lockdown. These workers since then were demanding the administration to facilitate their return to native places.

Subsequent to the Union Government’s decision to run Shramik Special trains exclusively for migrant workers across the country to return to their home States, the Karnataka Government had requested the Centre to run the special trains from Mysuru.

Today, the first of the two designated trains left Mysuru for Gorakhpur from Ashokapuram Railway Station. The train travels through Bengaluru, Dharmavaram, Nagpur, Itarsi and Lucknow to reach Gorakhpur on Monday (May 18) morning.

As per the information available with the Railway officials, there were 13 migrants from Alanahalli, 26 from Ashokapuram, 45 from Devaraja Police limits, 82 from Hebbal, 23 from Jayalakshmipuram, 13 from Krishnaraja, 14 from Kuvempunagar, 51 from Lashkar Mohalla, 10 from Lakshmipuram, 115 from Mandi Mohalla, 74 from Metagalli, 163 from Narasimharaja, 86 from Nazarbad, 63 from Saraswathipuram, 62 from Udayagiri, 43 from Vidyaranyapuram, 154 from Vijayanagar, 27 from V.V. Puram and 75 from  Mysuru city centre. These people were joined by a few more at the Ashokapuram Railway Station.

Before they boarded the train, migrant workers were taken in KSRTC buses from their respective shelter homes to the sprawling ground adjoining Ashokapuram Railway Station where the workers were thermal-screened. Health check-ups, were also conducted and all the workers were required to mandatorily wear face masks, maintain social distancing and follow other lockdown regulations during the journey.

The train fare, which is fixed at Rs. 895 per head, had to be borne by the migrant workers. The KSRTC too charged them Rs.40 per head to ferry them from their respective shelter home to Ashokapuram Railway Station. Today’s train had 20 coaches and all of them were completely sanitised. Even the KSRTC buses were sanitised.

Tomorrow, (May 17), the second such train will leave for Gorakhpur from Ashokapuram Railway Station in the afternoon, carrying the second batch of about 1,500 migrant workers.

From the Mysuru Division two Shramik Special – one from Ashokapuram (Mysuru) to Gorakhpur the other one from Kabakaputtur to Lucknow with 1520 passengers in each — started their journey today.

A press release from the Railways stated that to maintain personal hygiene, adequate quantity of soap and sanitisers have been provided in all the compartments. Before boarding the passengers were explained about the precautions to be observed given the highly infectious nature of the disease.

A total of six Railway Protection Force personnel will be escorting each train, end-to-end, for coordinating with Government Railway Police/State Police of the respective State Governments in the path of the train for sorting out any logistic or law and order issues smoothly.

The Indian Railway Catering & Tourism Corporation (IRCTC) has made elaborate arrangements for supplying food and water to passengers of these trains both at the originating point as well as at the end route stations working in tandem with other Railway Divisions.