Home » Coronavirus Update » From Scrap Yard back to Hospital Wards 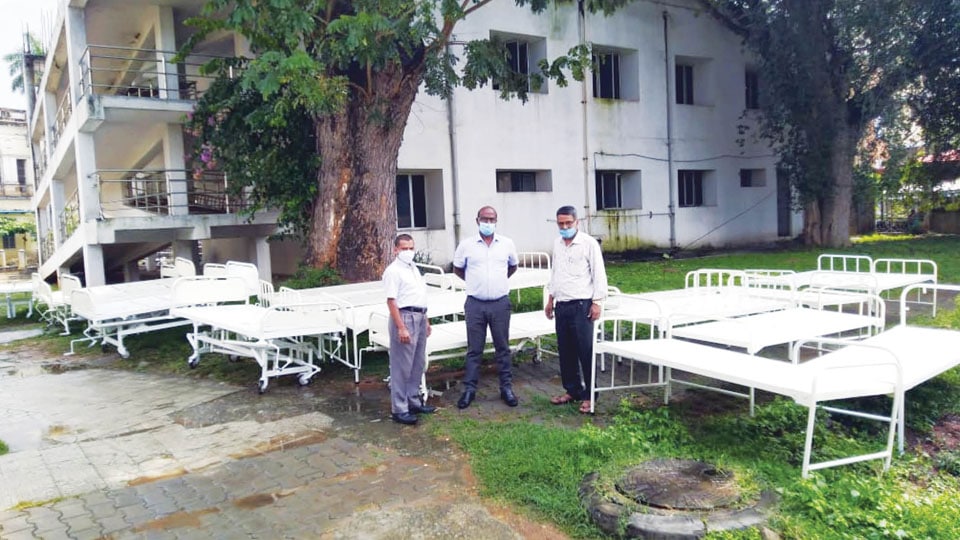 From Scrap Yard back to Hospital Wards

Mysore/Mysuru: Last month, an office-bearer of Lions Club was walking with Dr. B.L. Nanjundaswamy, Medical Superintendent of K.R. Hospital, in the hospital premises. Accidentally, the Lions member saw a heap of broken metal cots dumped in the corner. Upon enquiry, Dr. Nanjundaswamy, himself a member of Lions Club, told that it was scrap but waiting for the heap to grow big for auctioning. At that moment, the Lions member thought, why not re-use the cots by refurbishing it in these COVID times so that there is no shortage of beds?

When he shared his idea, the Medical Superintendent took out Rs.5,000 from his pocket as the first contribution towards this noble cause. This came as a big inspiration for the said Lions member, Ln. T.S. Ravindranath, Secretary, Lions Club of Mysore Vaidyas. It did not take much time for him to share this service idea with fellow members of other Lions Clubs who readily contributed for this unique social activity. In the next few days, he could collect around Rs. 50,000. In the first consignment, the Hospital had around 20 broken cots.

Then, Ln. Ravindranath took a few workers with him to give the cots a new look. He personally stood at the work spot and supervised the re-conditioning and re-painting of cots. It cost Rs. 600 to totally refurbish each cot which included one round of primer, two rounds of painting and replacement of nuts and bolts. This came as a blessing as the Hospital authorities were facing severe shortage of cots due to spike in Corona  positive cases.

Sharing his experience with Star of Mysore, Ln. Ravindranath said, “It gave me a sense of happiness that we could do something for the society. I had never imagined that we can re-use the condemned cot, wheelchair and stretcher by spending just Rs.600. It is  an eye-opener for the State Government too as they can reuse the hospital infrastructure by spending the minimum amount instead of wasting tax-payer’s money. I have appealed to members of all Lions Clubs across the State to consider Mysuru’s K.R. Hospital social service as a pilot project and take up similar works in their respective taluks and districts to help patients as well as the Government Hospitals.”

He said people spend thousands of rupees on birthdays, anniversaries and other social gatherings. But, if each one can contribute Rs.600 the same could be used on giving a new look to hospital infrastructure. The names of donors will be painted on them.

“If every person can contribute at least 5 per cent of his earnings, they can definitely bring changes in society. I run an event management company and earmark certain percentage of income for social service. When the society has given everything to us, we have to make little contribution,” Ln.Ravindranath noted.

As part of social service, Ln. Ravindranath also distributes food to around 50 persons at RMC Yard, Sayyaji Rao Road, daily afternoon. It was stopped briefly due to COVID-19 and has re-started one-and-a-half months ago. This is being done to ensure that none should stay hungry. Feeding hungry people is the best seva that one could do to the society, he opined.