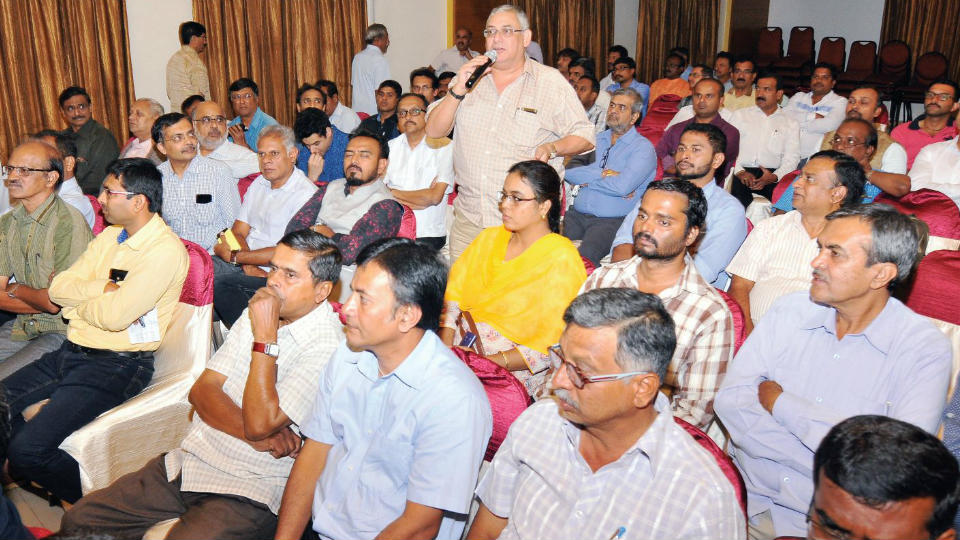 Mysuru: Union Minister Nirmala Sitharaman pointedly asked the GST Mysuru Commissionerate, Commissioner G.V. Krishna Rao to go to the people instead of sitting in the office to clarify the problems and issues faced by the trade and industry bodies.

“Your mission should be to go to each cluster, sit with the affected people there and discuss their problems. I do not want anyone to go to the Commissioner. Wherever your jurisdiction is visit each and every one of them and give me a ground report. I want you to start the exercise from tomorrow itself,” she said.

The Commissioner tried to stand his ground and informed the Minister that every effort on the part of the Commissionerate was going on and already many meetings had been held with the people and doubts were being cleared. To this, Sitharaman told the audience, “Please let me know if there are any questions unanswered. I will personally take it up with the Commissionerate.” And, again asked the Commissioner to make a checklist of the questions so that he and his team could answer them or direct them to GST Council.

Even as she was giving directions to the Commissioner and his team, Sitharaman was adroitly fielding questions from the select audience of traders, businessmen, industrialists, CAs, builders and service providers.

The very first question posed by a LPG filling unit person that how could it be explained that on the same product two taxes of 5 and 18 per cent could be imposed, the Commissioner was not able to give a convincing reply and he asked his team members to reply. As they were struggling to find the answer, Sitharaman asked the organisers to move to the next question.

Then the members of the Handicrafts Manufacturers Association of Mysuru explained to her the impact of the GST on their industry to which she replied that there is input tax credit available to them.

A waste manufacturer had a question on how much of a tax burden he will be faced with as he collects waste and does not charge anything for it (and there is no scope to get input tax credit), Sitharaman chipped in to ask, “Can I give you an answer. If your turnover is less than Rs. 20 lakh then you do not have to worry it. However, if your turnover exceeds Rs. 75 lakh then I think, y ou have no choice but to pay.”

Chartered Accountant C.M. Achutha began his question by telling that after the introduction of GST, the government was honest, the dealers were honest and the politicians were honest too and stopped at that. Sitharaman said “Even CA is also honest.” There were peals of laughter.

Tyre dealer B.M. Prakash wondered why the tax on the rear tyre (huge tyre) of the tractor was higher and also pointed out that the animal-drawn cart tyres were enjoying 0% tax and what was the situation now.

In reply to a question from Hemanth of BAI referring to Singapore having a single tax of 7 per cent, Sitharaman said, “We all want to have one rate, it is not just Modi or NDA and that is the ideal situation. In a vast and diverse country like India, however, it is not possible at present. You will not be able to protect ‘Make in India.’ That is the reason why there is tax on sanitary napkins, otherwise the country will be flooded with cheap imports.”

Another Chartered Accountant B.S. Ravikumar said that more time needs to be given to let the GST kick in and at least there should be one year time gap before penalties levied.

Sitharaman gave a candid, barbed reply, “I have to submit, CAs have been in the thick of the matter. I wished more preparations with the clients happened. Change is not something a CA should be scared of.”

Then she went on to explain, “Everyone thought GST will not happen on July 1. All of us relaxed. We thought the government will go on and on about it and will not implement. I must tell you that until today, nothing has gone wrong with GST. It has come with a vibrant, robust network.”

Former Minister and MLA Suresh Kumar, in his concluding address, said that there was a real good interaction. “Today, we have seen one of the members of Modi’s team. Imagine how the rest of the team is. You have all welcomed GST. We will try to resolve all issues.”