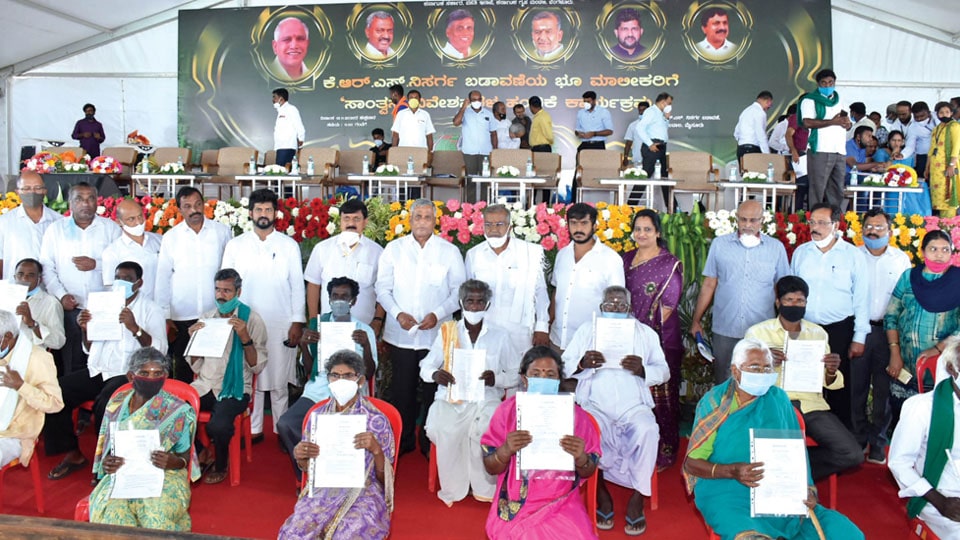 V. Somanna distributes site allotment letters through draw of lots to 137 farmers who parted with their lands for formation of KRS Nisarga Layout by KHB near Yelwal

Mysore/Mysuru: Housing Minister V. Somanna distributed site-allotment letters through a draw of lots to 137 farmers who had parted with their land for the formation of KRS Nisarga Layout by Karnataka Housing Board (KHB) near Yelwal at a programme held at the Layout on Friday.

The KHB had developed 484 sites of different measurements (20’x30’, 30’x40’ and 40’x60’) for distribution to land owners from Yalachalli, Gungral Chathra and Kallur Naganahalli villages, who had collectively parted with 489 acres of land for KHB’s KRS Nisarga Layout near Gungral Chathra in Yelwal hobli.

Speaking on the occasion, Somanna said that the KHB has developed KRS Nisarga Layout on 489 acres of land by spending Rs. 686.02 crore.

Pointing out that the Layout will have 6,309 sites, 207 houses,18 CA (Civic Amenities) sites, 12 commercial complexes and 54 parks, he asked the land-losers who got compensatory sites not to sell for any reason. Somanna warned the officials that action will be taken against them if the KHB receives complaints from land-losers on non-allotment of compensatory sites.

Lauding the efforts of Chamundeshwari MLA G.T. Devegowda and MP Pratap Simha for the formation of the Layout, Somanna said that the four-lane Highway that passes close to the Layout will help boost the infrastructure in the surrounding areas. He further said that the region will witness a tremendous growth if MLA G.T. Devegowda and Mysuru-Kodagu MP Pratap Simha get re-elected in the next election.

MP Pratap Simha, in his address, made a fervent appeal to the farmers not to sell their allotted sites for any reason. Pointing out that keeping sites with themselves will come to their rescue during difficult times, Simha said that there is no doubt that there will be a great demand for these sites in the near future, with the  proposed four-lane Highway passing close to the Layout.

Stating that the State Cabinet has approved formation of Hootagalli CMC and Four Town Panchayats, the MP said that this decision will give a big push for the formation of a Greater Mysuru.

Chamundeshwari MLA G.T. Devegowda, who also addressed the gathering, shared the pains that he underwent before the formation of the Layout. Appealing Minister V. Somanna to construct a bus shelter, educational institutions, a Police outpost and to provide all other civic amenities for the Layout, besides which the four-lane Kushalnagar Highway is proposed to pass through.

Noting that the Layout is strategically located with KRS backwaters and important road networks running close to it, Devegowda re-iterated his appeal for a full-fledged locality with all civic amenities.

Recalling his efforts along with that of MP Pratap Simha for the formation of Hootagalli CMC and four Town Panchayats despite opposition from the MCC, the MLA thanked Chief Minister B.S. Yediyurappa for giving Cabinet approval for the same.

KHB Chairman Araga Jnanendra, in his address, said that he was happy to note that the land-losers have been distributed site-allotment letters, ending years of plight of the farmers who had parted with their land.

Maintaining that the Layout is coming up in a calm and serene atmosphere and strategically situated, he said that the value of sites is expected to shoot up in the coming days and appealed the farmers not to sell their sites in haste. He further said that land-losers have been allotted 2, 3 and 4 sites each depending upon the area of land that they parted with for KRS Nisarga Layout, which he said has been formed targeting lower and middle income groups.