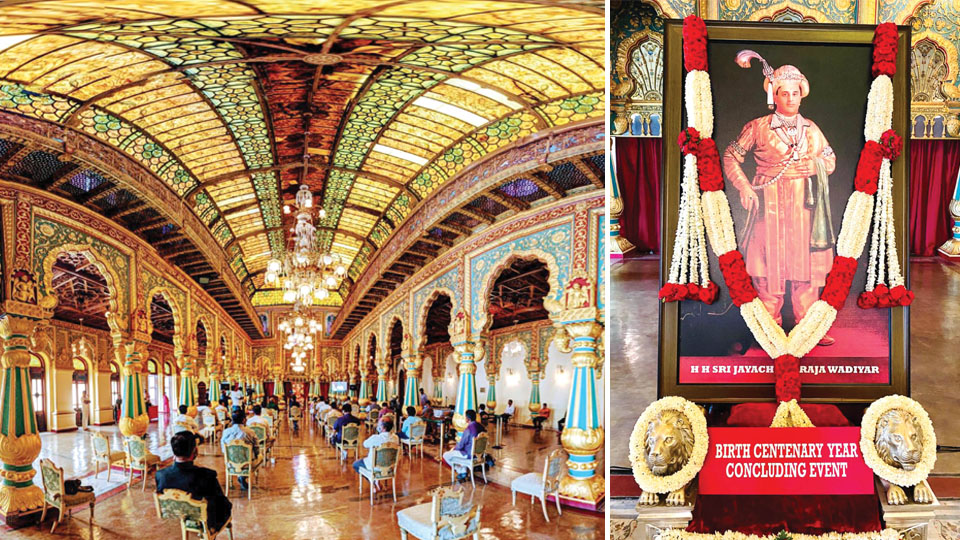 He was speaking at the valedictory function of the birth centenary celebrations of Jayachamaraja (JC) Wadiyar held virtually on YouTube live streaming by His Highness Srikantadatta Narasimharaja Wadiyar Foundation (HHSDNRW) here yesterday.

Naidu, who began his address in Kannada, said that in remembering JC Wadiyar and celebrating his birth centenary, one was also celebrating the timeless Indian values of Unity in Diversity and the Spirit of Democracy.

Pointing out that the last Maharaja was a remarkable ruler and an able administrator, besides a strong proponent of Industrialisation, he said that JC Wadiyar helped in the establishment of HAL, National Tuberculosis Institute, Sir C.V. Raman Institute and expansion of Indian Institute of Science (IISc), all in Bengaluru and CFTRI and AIISH in Mysuru, among others.

Maintaining that he was the first among the princes to readily accept the Instrument of Accession and the recommendation of the Constituent Assembly, he said this itself speaks of his nationalistic vision.

Noting that JC Wadiyar was the real ‘People’s Maharaja,’ the Vice-President said that he inherited the rare magnanimity of ‘Royalty with Democracy.’ In pre-Independent India, Mysore was the most self-reliant and progressive State, he added.

Asserting that Wadiyar was a shining example of what an ideal ruler should be, he recalled his interest in philosophy and western music and as well as his contribution to Karnatak music. Touching upon the contribution of JC Wadiyar to the field of environment and nature conservation, Karan Singh recalled the warm hospitality that he received from the erstwhile Mysore ruler, when he visited Chamundi Hill, as part of his South India tour that he undertook along with his family in 1954.

Rajya Sabha MP Jairam Ramesh, also a former Union Minister and Senior Congress leader, said it was a tribute to Wadiyar that the transition from princely rule to that of democratic and Independent India was smooth in case of Mysore.

Noting that JC Wadiyar and other members of the erstwhile Royal family had established great systems and values, he said that the last Mysore Maharaja, as a patron of VHP, had propounded the ancient Sanskrit notion of ‘Vasudaiva Kutumbakam,’ meaning the world is one family.

Jairam Ramesh further said that the book ‘The Story of The Integration of the Indian States,’ penned by V.P. Menon, has just four pages on Mysuru, which explains how smooth the accession of Mysuru into the Indian Union was.

Earlier, HHSDNRW Foundation Chairperson Pramoda Devi Wadiyar, lit the lamp at Amba Vilas Durbar Hall of the Palace to inaugurate the event, which was joined by the Vice-President, Karan Singh and Jairam Ramesh from their respective residences in New Delhi.

JC Wadiyar’s daughters Kamakshi Devi and Indrakshi Devi joined from their homes in Bengaluru. The event was held virtually as a public programme could not be held due to COVID-19 regulations.

The Foundation Secretary Reginald Wesley and others were present.