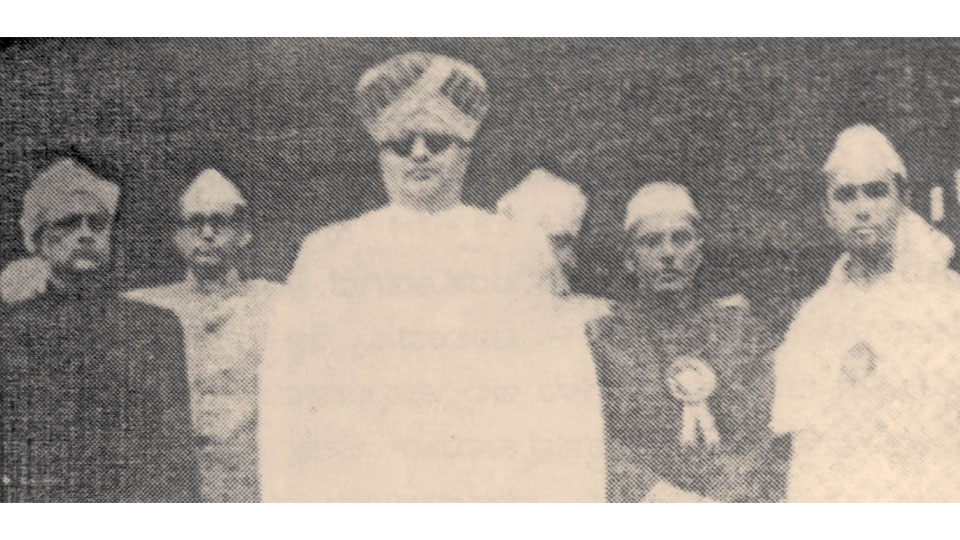 Twelve years left for a century mark, the Mysore District Journalists’ Association (MDJA) has a history of its own. During this eventful period, many interesting events have taken place. But very few of them are recorded, although the city happens to be a pioneering one in the field of journalism. Its contribution to the growth of journalism in the State, pioneered by M. Venkatakrishnayya, the Thatayya of Mysore, is unique and significant.

One such event of a historic nature that comes to my memory is the State-level conference of scribes hosted by the Association way back in 1951. Though I witnessed it as a young school-going lad, the event is vividly etched in my memory, chiefly because of an incident that took place on the opening day.

Just around four years had passed after the attainment of freedom and the air of the newly gained freedom was still breezing fresh. People were happy that they were free from the yokes of British authority. A feeling of achievement and fulfilment was prevailing among them. It had received a boost with the nation turning into a Republic in 1950.

A sense of deja vu was seen all over particularly at public functions where freedom fighters and followers of Gandhism, many of them sporting Gandhi caps and wearing Khadi dresses, gathered in good numbers. The November 1951 Journalists’ Conference was one such event arranged amidst this atmosphere.

Consequently, it had attracted Pressmen from all over the State in large numbers. Many of them were participants in the freedom struggle and followers of Gandhian principles. The effect of the change-over of a Princely State into a democratic set-up under the Republic was visible at the venue, the Jaganmohan Palace.

Elaborate arrangements had been made by the host committee, the Mysore District Journalists’ Association led by its President H.K. Kumara Swamy, Editor of ‘Aruna’ Kannada Daily and Secretary G.L. Swamy, Editor of ‘Samachar.’  The Karnataka Union of Working Journalists (KUWJ) was headed by veteran journalist K. Jeevanna Rao, who was the President of the Conference.

READ ALSO  He builds an Agrahara, makes his house a temple

After hoisting of the Tricolour in the morning at Nanjaraja Bahadur Choultry, where some of the journalists had been accommodated and food arrangements had been made, the delegates assembled at the Jaganmohan Palace Auditorium for the major event — the inauguration of the Conference. None other than the Maharaja had been invited for the inaugural ceremony.

Perhaps, it was for the first time that Jaganmohan Palace had been made available for a public function of this sort. The auditorium was generally restricted for functions related to the Palace or the State Government, like the Mysore University Convocation.

All the arrangements had been made on the dais. Seats had been placed in a row for the chief guests to sit, including the Maharaja. Whenever the Maharaja attended a public function, officials like the Huzur Secretary and other personnel from the Palace arrived at the venue well in advance to check whether the arrangements were in order and a red carpet had been rolled out to give the Maharaja a red-carpet reception.

This led to resentment among the office-bearers of the Association and others present on the dais. They told the Secretary to the Maharaja that the Maharaja was no longer the authority under the old structure and the Princely status no longer existed as the country had attained freedom and now it was a democratic republic as well. However, their contention was rejected. Seeing that the officials were adamant, the Pressmen decided to stage a walkout.

Led by the office-bearers of the Association, the journalists assembled at the entrance to the Jaganmohan Palace, where they had planned to receive the Maharaja, marking their protest. A few minutes later, the Maharaja drove in and the driver stopped the car in front of the steps at the Jaganmohan Palace. The Maharaja got down from the car and the Palace officials rushed to receive him.

He saw the large number of Pressmen standing at the entrance with a show of resentment. The Maharaja immediately sensed that something had gone wrong. His officials explained to him the developments that had taken place.

Maharaja Jayachamaraja Wadiyar asked the officials to realise that the scenario had changed and hence not to insist on the protocol that they followed all these days. No sooner the agitated office-bearers of the Reception Committee and their colleagues learned this, there was a sense of relief.

They were happy that the Maharaja, unruffled, had resolved the issue smoothly. They received the chief guest with all cordiality and gesture that is befitting the status of a Maharaja. The inauguration went off smoothly. The 1951 Conference had thus turned a new leaf in the history of journalism.

2 COMMENTS ON THIS POST To “Maharaja & Pressmen: A historic event”