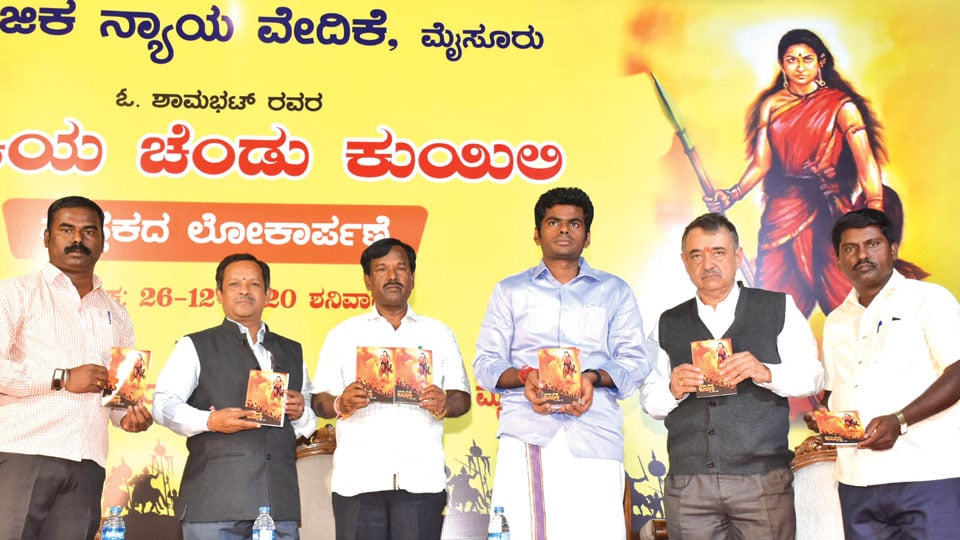 Annamalai is a 2011-batch IPS officer who resigned from service last year and took the political plunge. Before resigning, he was the Superintendent of Police of Udupi and Chikkamagalurudistricts and Deputy Commissioner of Police, Bengaluru South.

The book release event was organised by Samajika Nyaya Vedike and Sri Chamundeshwari Geleyara Pragathipara Seva Pratishthana at Sarada Vilas Centenary Hall. Addressing the gathering, Annamalai regretted that those who supported the British and their minions have become national heroes as the British distorted Indian History.

Annamalai said the British twisted history because of which Kuyili, a great warrior and an army commander of Queen Velu Nachiyar of Sivagangain Tamil Nadu had been totally ignored. “Those who danced to the tunes of British were incorporated in text books as great leaders. It is a shame on the part of Dravidian politics of Tamil Nadu to hide facts about great warriors,” he said.

Heaping praises on Sham Bhat for authoring the book and highlighting a true hero, the former IPS officer said that Sham Bhat toured extensively in 38 villages of Tamil Nadu, picked up details of 240-year-old history and brought out in the form of a book. This could be possible for only those who have grace of God and dedication. It is more meaningful that the book release function is taking place in Mysuru, a city with rich cultural heritage, he opined.

Annamalai said historians say that the first rebellion took place in 1857 but queen Velu Nachiyar of Sivaganga Fort had fought against the British from 1750-1800. She was fluent not only in Tamil language but also in French, Urdu and English.

“Her commander, Kuyili got to know about a plot by Arundatiyar community to kill the queen. At that time, she was hardly 16 years old and she had killer her own guru for colluding with the British to finish off Velu Nachiyar. After coming to know about this, Kuyili was made her personal bodyguard and Kuyili went on to become the army commander,” Annamalai said.

“The British had an armoury next to Rajarajeshwari Temple in Sivaganga. For this reason, they had allowed only women on the day of Vijaya Dashami in 1780. Kuyili, on the last day of Navaratri, dressed as an elderly lady and went to the temple with a few friends. She poured ghee kept for puja, sets herself with fire and jumped on the armoury. The entire armoury was reduced to ashes due to her immolation. So the British army lost the war against Velu Nachiyar. This has been termed as the first victory against British and also as India’s first rebellion,” he explained.

Diverting from history, Annamalai said that farmers protesting in New Delhi are being instigated by some political parties. “Narendra Modi government has implemented three farm laws for the welfare of farming community. There was no confusion whatsoever in these laws. However, some political forces have instigated farmers to protest. By doing this, vested interests were creating a kind of confrontation between farmers and common people. “Agitation against the Centre is held once in six months. It started with demonetisation, followed by CAA, NRC and now farm laws. Another protest in the next six months cannot be ruled out,” he added.

As SP of Udupi and Chikkamagaluru, I was going to my favourite temple of Amruteshwara near Kadur. Upon talking with elders, I came to know that this temple had been built by a king in memory of Amruthayya Nayak, a brave soldier. Like Kuyili, we can find forgotten heroes like Amruthayya Nayak but they need to be identified and recorded. I will get the book ‘Benkiya Chendu Kuyili’ translated into Tamil language and motivate younger generation. – K. Annamalai, Vice-President, BJP-Tamil Nadu

Sham Bhat must get the credit

It was Kuyili who became a martyr by ending social stigmas like slavery and untouchability in the society. In 1772, British army waged a war against Sivaganga and killedqueen Velu Nachiyar’shusband and daughter Gowri Nachiyar. Unperturbed by this, Velu Nachiyar built a women’s army and appointed Kuyili as the commander. The credit of introducing Kuyili to the society goes to Sham Bhat. – Dr. B.V. Vasanth Kumar, Chairman, Karnataka Sahitya Academy