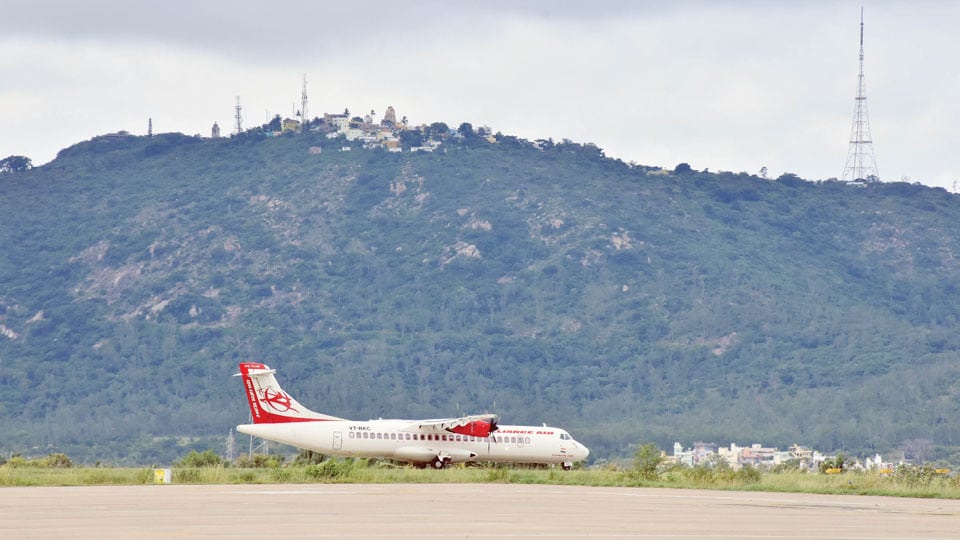 Funds will be transferred to KIADB for speedy land acquisition, says MP

Mysore/Mysuru: Months after he announced that Rs. 319.13 crore will be released for the Mysore Airport Runway Expansion project, Chief Minister Basavaraj Bommai has released the second instalment of Rs. 100 crore.

The first instalment of Rs. 50 crore was released some time ago and works including levelling the areas around 140 metres of the existing runway and freeing the areas of land gradients have already been taken up. With the second major fund release, the project has got a boost.

The Government Order (GO) clearing the release of the second instalment was issued on Nov. 19 and according to a press release from Mysuru-Kodagu MP Pratap Simha, the amount will be transferred to the Karnataka Industrial Area Development Board (KIADB) to facilitate purchase and transfer of land. The land will be acquired by the State Government (KIADB) and it will be handed over to the Airports Authority of India (AAI). The MP stated now that Rs. 100 crore has been released, the land acquisition process has gained traction and KIADB will be asked to speed up the process.

At present, only ATR-72 type planes can land at Mysore Airport that has a length of 1,740 metres and a breadth of 30 metres. To facilitate the landing of bigger planes, the runway must be expanded to 2,750 metres and its breadth has to extend up to 45 metres.

A boost to industries, tourism and education

Industrialists and tourism stakeholders say that the expanded runway where bigger planes  like Boeing 737 and Airbus A320 can land can create a conducive atmosphere for the creation of an International Airport. Bigger and long-haul flights that can cover cities across India will further boost the industrial growth of the Mysuru region.

This project, along with the 10-lane Economic Corridor between Mysuru and Bengaluru, the state-of-the-art semiconductor plant to be set up in Mysuru by Israeli firm ISMC Analog Fab Pvt. Ltd. with an investment of Rs. 22,900 crore, and Container Corporation of India’s (CONCOR) Multi-Modal Logistics Park at Kadakola will be a game-changer for the Mysuru region. It will build economic and industrial activities and also give a boost to tourism and education.

The State Government has fixed a compensation of Rs. 1.5 crore per acre as per the prevailing land rates and the KIADB has already acquired 206.22 acres of land through a notification for which the compensation has to be paid.

Initially, the AAI had signed a Memorandum of Understanding (MoU) with the KIADB for land acquisition. Later, the Cabinet has made the Karnataka State Small Industries Development Corporation (KSSIDC) Limited as the nodal agency that will oversee and facilitate the transfer of land to AAI and also the Airport expansion works.

A point pertinent to note here is that the runway expansion hinges on the 500-metre to 600-metre-long underpass that will be built on Mysuru-Nanjangud Highway. The underpass is necessary as the alignment of the expanded runway and the Nanjangud Highway bisect each other.

Once the underpass is constructed, the Highway will pass below the extended runway. The construction of the underpass is already in the pipeline and the project will be taken up by the National Highways Authority of India (NHAI) at an estimated cost of Rs. 700 crore. The Bureau of Civil Aviation Security (BCAS) has also given security clearance for the underpass.