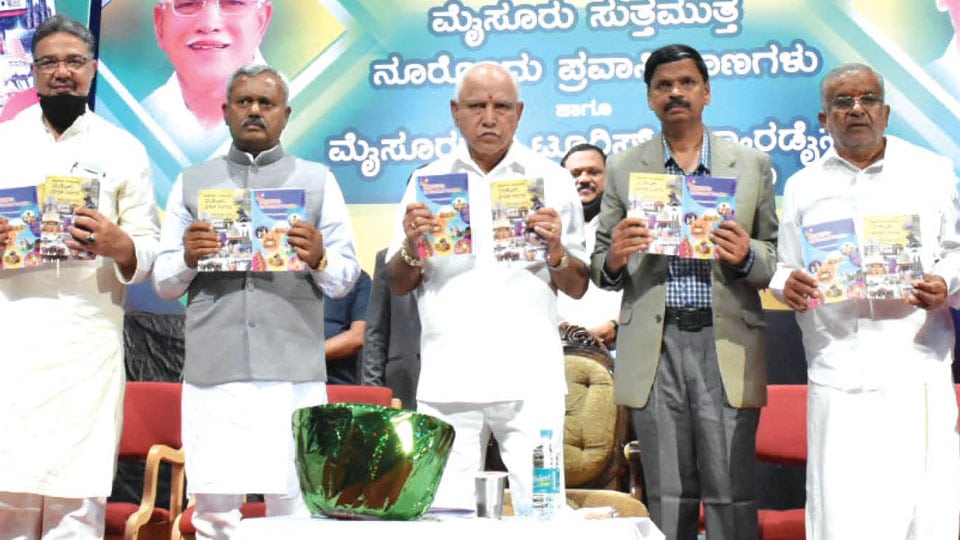 Mysore Airport to get first priority in Tourism Policy: CM

Mysore/Mysuru: Chief Minister B.S. Yediyurappa has assured of taking measures to boost tourism and hospitality sector in Mysuru. “My Government is spending nearly Rs. 5,000 crore on the tourism sector in the entire State for 2020-2025 as part of a new Tourism Policy and the same will generate over 30 lakh jobs. To boost tourism sector in Mysuru, the Mysore Airport will be given the first priority,” he said.

The CM spoke at Kalamandira last evening after releasing books on tourism attractions around Mysuru city and the translated English version of the book, ‘Mysuru – The Tourist Paradise’ by senior journalist Amshi Prasanna Kumar. The Kannada version of the book is titled ‘Mysuru Sutta Mutta Noorondu Pravasi Tanagalu’. The book has been translated to English by Dr. R. Nagabhushan. The event was organised by District Kannada Sahitya Parishat and Chinthana Prakashana.

“The tourism sector in Karnataka is capable of providing 30 lakh direct and indirect jobs and can contribute 15 percent of income to the Gross Domestic Product (GDP) of the State. The Tourism Department, with the motto of ‘One State-Many World,’ was committed to developing the tourist attractions. We will consider all the representations given to me by various tourism stakeholders in Mysuru while formulating policies,” he said.

Yediyurappa said the Karnataka Tourism website had received over 10.5 crore hits in one year, describing the potential of the State’s tourism attractions and the interest shown in those sites by the domestic and international tourists.

The State Government has taken up 160 infrastructure development works in select tourist places across the State and 20 famous tourist attractions including Hampi, Badami, Aihole and Banavasi are being developed to world-class standards to attract international tourists, he added.

“I understand that the hotel industry and travel agencies and allied sectors are suffering due to the COVID contagion. Let me assure you that the Government is making all possible efforts for the development of tourism by creating a safe policy,” he claimed.

“Karnataka’s tourism sector had won many national and international awards, including an award from Denmark for Padubidri beach in Dakshina Kannada. Amshi Prasanna Kumar’s works on tourist sites of Mysuru, Mandya and Chamarajanagar would support the on-going initiatives for promoting tourism in the region,” Yediyurappa said.

Presiding over the event, Mysuru District Minister S.T. Somashekar said that the State Government was committed to give a boost to Mysuru’s tourism sector. “We are chalking out plans to celebrate Dasara in a much grander manner attracting more and more international tourists and a proposal to establish Dasara Authority is before the Government,” he said.

Kannada Book Authority Chairman Nandish Hanche said many tourist sites that had gone unnoticed needed development and promotion. Several such sites had the potential to emerge as new attractions, attracting tourists. “I request the Government to consider developing a mobile application like the one that has been developed for knowing survey number details of any land by the person operating the app standing on that particular land. If such an app is developed, tourists get all details about the place and nearby tourist attractions when they are on the move,” he suggested.