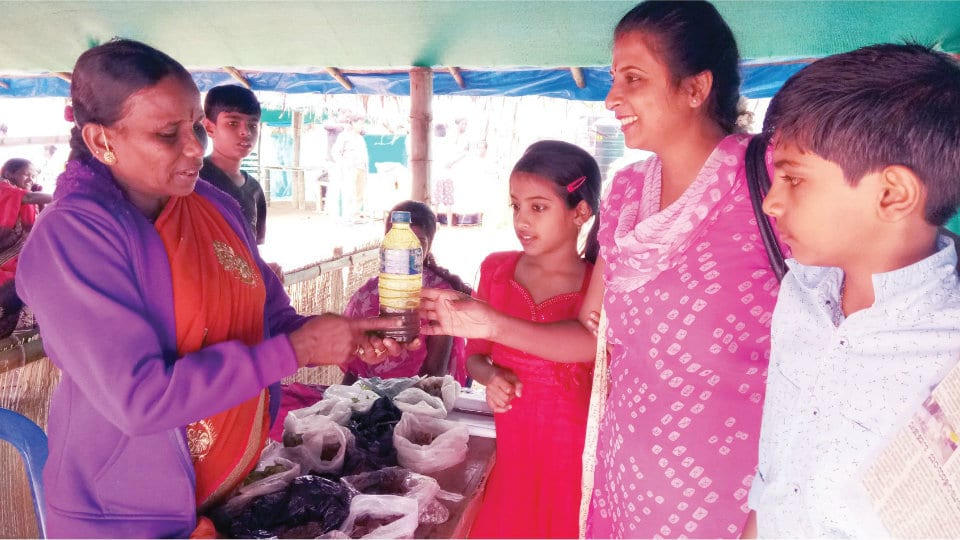 Nagamma’s herbal medicine is a super hit this Dasara too

Mysuru: If the tribal delicacies including Bamboo Biriyani and crab curry are making news at the Dasara Aahara Mela at Bharat Scouts and Guides Grounds, one woman is silently drawing crowds where she sells herbal medicines and medicines to cure skin diseases.

Nagamma, a nature therapist or Naati Vaidya, has come all the way from Kodagu to provide medicines to visitors. And the medicines given by her are in great demand. She made her appearance during last Dasara and Star of Mysore had featured her in these columns. Taking into account the demand for her medicines and the recognition she received last year, Nagamma decided to come this year also.

Hailing from Doddabettageri Village in Dubare Forest of Kodagu district, Nagamma has so far treated hundreds of people at the Aahara Mela and at the same time, advises young men and women on healthy living.

Nagamma’s treatment is based on herbs, leaves and tubers obtained from the forest and the knowledge that has been passed on to her by her ancestors.

Sixty-nine-year-old Nagamma has her own fan base in  Mysuru. Whoever has taken medicines from her last year have come back to her and this year, they have enough stocks of medicines for them to last for months together.

A recipient of 2014 State Janapada Award, Nagamma is an expert folk singer too. She has an innate and immense knowledge about herbal medicines that have been handed over to her by her ancestors.

Speaking to Star of Mysore, Nagamma said that she has learnt the art of finding medicinal herbs, leaves, grass and wooden barks from her grandfather. “I am the fourth generation to provide native medicine in my family and even when I was a child, I used to observe my father and grandfather preparing medicines from forest produce,” she said.

“My grandfather Doddajja was a Patel and used to supply such medicines for the whole village. After my grandfather, my grandmother continued the tradition that was taken over by my father Masanaiah and mother Siddamma. Now I am passing on the tradition to my daughter and daughter-in-law,” she added.

“In my tribal hamlet, I treat hundreds of patients without even charging a single rupee. However, it is not that easy to get forest plants these days. Even if you get hold of medicinal plants, it is difficult to prepare them,” she opined.