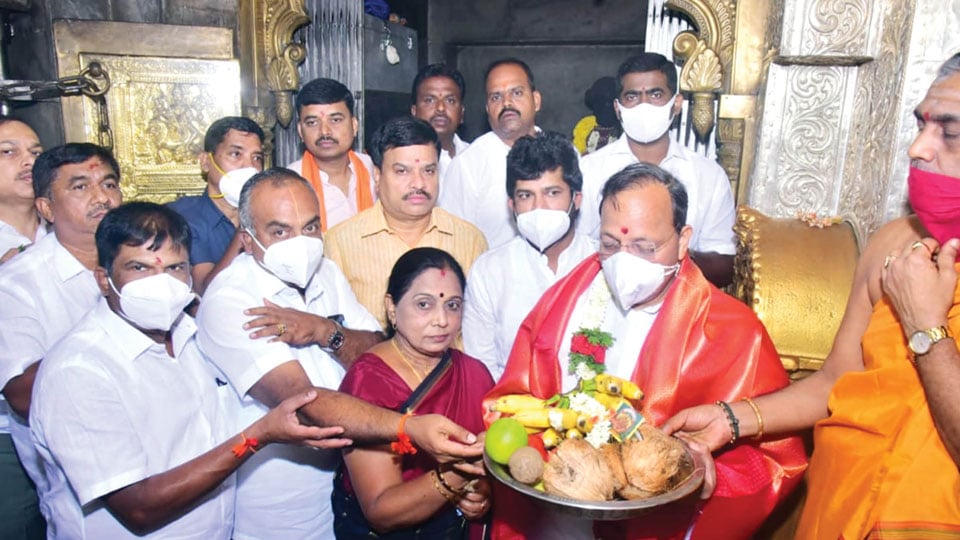 ‘No tie-up with JD(S) in Assembly polls’

Mysore/Mysuru: Categorically ruling out any tie up with the JD(S) for the next Assembly polls, BJP Party in-Charge of Karnataka Arun Singh said that the BJP was strong enough to gain a majority of its own in the 2023 Assembly polls. He was speaking to press persons after visiting Sri Chamundeshwari Temple atop Chamundi Hill this morning, where he offered special prayers to the deity.

This was his first visit to Mysuru after becoming the State party in-charge.

Arun Singh said he was happy that Mysuru city got its first BJP Mayor with the election of Sunanda Palanetra, which goes to show that the party is gaining strength with every poll.

Pointing out that the party is gearing up for the next Assembly polls from now itself, he said that he was very much hopeful of the BJP coming to power on its own with a handsome majority.

Maintaining that the BJP does not need the help of JD(S) to come to power, Singh claimed that the BJP has grown leaps and bounds all across the country over the years and has become the biggest political party in the world.

Asserting that former Chief Minister B.S. Yediyurappa (BSY) is one of the tallest party leaders, Singh said that BSY will share all his experience in party  organisation for strengthening of the party from the grassroot level.

Stating that the party’s immediate target is to win the upcoming Zilla Panchayat (ZP) and Taluk Panchayat (TP) polls, he said that the party workers are working overtime to ensure a win for the party, even in old Mysuru region, where the party has not been able to perform to expectations so far.

Replying to a query on dissenting notes within the party on Cabinet formation and portfolio allocation, Singh said that it is the CM’s prerogative to allot portfolios and the BJP High Command does not have any say on this.

Dismissing reports on dissidence as only speculations, he said that all Ministers of the Basavaraj Bommai Cabinet have commenced work and it is there for everyone to see.

Lauding the Bommai administration, Singh argued that people were getting even more closer to the BJP, which was coming up with numerous welfare and development schemes for the development of all sections of the society.

Singh is scheduled to take part in a series of meetings on party organisation today at the BJP office in Chamarajapuram, with the first meeting taking place at 11.15 am, in which office-bearers of Mysuru city, District and Chamarajanagar district took part.

After addressing Mandal Presidents and Secretaries at 2 pm, Singh held a Core-Committee meeting of the three District Units at 3.30 pm.

He is scheduled to address a press meet later in the evening, following which he will take part in the wedding reception of the daughter of former MP C.H. Vijayashankar to take place at Rajendra Kalamandira on Ramanuja Road and stay for the night in the city.

Arun Singh, who arrived in the city last night (Aug. 30) on a two-day visit, was given a warm welcome by the party workers at Jaladarshini Guest House on Hunsur Road, where he stayed for the night.