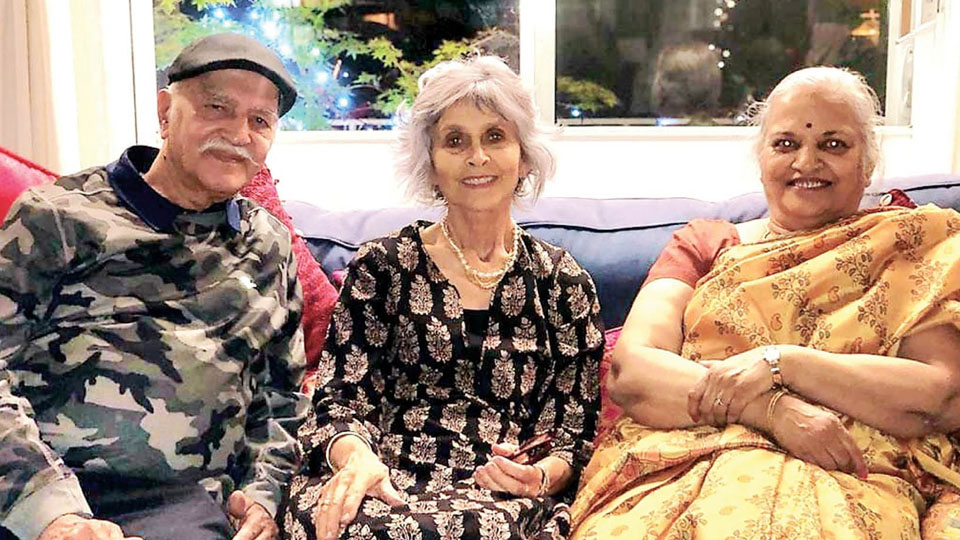 I have a patient, Shama Rao, who can perhaps be called a global citizen. He and his wife  Chandralekha stay here in Namma Mysuru while their three children stay abroad. A son and daughter in two different places in the US and another son in Australia. And so, Shama Rao and his wife stay here in Mysuru for about there months in a year and spend the other nine months in three instalments of about three months each, in three different places with their three children!

The other very interesting thing is that once in three months they both unfailingly come to see me for their three-monthly medical check-up. Invariably, at every one of our meetings, Shama Rao brings me some souvenirs or keepsakes from the different places he visits during his travels across the world. These include things like pens, keychains, wallets and even clippings from magazines and newspapers, usually related to medical matters.

At these meetings, after their consultation is over, we invariably spend an interesting half hour chatting. Actually, the Shama Raos do most of the talking and I do most of the listening because I prefer these conversations to be that way, if I have to gather some information about what is happening around the world. They tell me all about how their most recent trip was and I tell them how our once laid back but now fast galloping Mysuru has been while they were away. So, this is a kind of note-exchanging exercise though not like the note-worthy kind we had here in India about four years ago!

This time, when Shama Rao and his better half came to see me, along with a few other souvenirs, they also gave me a packet of American currency notes containing the equivalent of 364 dollars in 34 notes of different denominations, which was mentioned on the packet itself. But thankfully, this seemingly large amount was not meant to be my consulting fee because what their packet contained were not usable American dollars but completely shredded ones.

They told me that the packet of shredded currency notes they brought was a souvenir called ‘Fed Shreds’ issued by the Federal Reserve Bank of Chicago which they had visited at their most recent trip to the US. It appears the bank, which takes back from circulation all the damaged and worn-out notes, shreds them and makes souvenir packets out of them for visitors. Here in India too, our Reserve Bank destroys soiled, damaged and unusable currency notes on a regular basis, which it replaces with newly printed ones. And, we are told that after our recent demonetisation, the Reserve Bank had to dispose of more than 800 tons of shredded currency notes which was naturally a gargantuan task.

Upon the advice of some smart brains in their Thiruvanathpuram office, it sub-contracted this job of recycling them to a private firm in Kerala from where they were exported as pulp boards to South Africa, the land that played a crucial role in the making of the Father of our Nation, whose face adorned the Rs. 500 and Rs. 1,000 notes that were demonetised! How very interesting!

Coming back to Shama Rao, while I accepted his gift of American dollars happily, I was happier still that the hospital where they came to see me had collected my consultation fee, well in advance, in fully usable Indian rupees! But for me, his gift was a most unusual souvenir and it will now find a place among the many odd things in my museum-like collection.

READ ALSO  A Nun’s Day Out with a Soothsayer!

But there was another interesting gift he gave me along with the packet of American dollars and that was a book from Australia, titled ‘And the answer is a Pineapple’ by an Australian writer called Claudia Hyles. It was actually a book about the origin, evolution and history of the pineapple which was full of the varied recipes of all that can be concocted from it, collected from across the world. It was not surprising that the writer had decided to include recipes from across the world because she and her husband happen to be among the few people who have worked in many countries across the length and breadth of the world, an opportunity I would have loved to have had but never had!

Now you may ask why this lady chose the humble pineapple as a subject to write about when she could have written a book about so many other more popular culinary preferences and made it a bestseller. It was only because, right from her childhood in Australia, where pineapples were in abundance, her mother who was an imaginative and adventurous cook, to use Claudia’s own words, used to prepare the most varied kinds of dishes from the fruit, which included her most sought-after pineapple-flavoured Chow Mein, her signature dish. And, the reason why Shama Rao chose to gift me this unusual book was not because he thought that the pineapple was one of my favourite fruits too but because he has a very special and unusual connection with its author.

Way back in the year 1968, as a part of an international student exchange programme, Claudia Hyles had come to Mysore in a group of about six students who were accommodated with different families across the city as their guests. Claudia happened to stay in Shama Rao’s father’s house in Lakshmipuram for about two weeks when the young and handsome Shama Rao was given the role of showing her and her friends around the city.

Whether he was assigned this role by his father or assumed it on his own by some clever subterfuge, is open to speculation and I prefer to leave it that way. But in this matter, my guess is as good as yours! What is interesting to note is that just before her arrival, Shama Rao’s father, the late Venkatasubba Rao, who was a perfumer by profession, very thoughtfully bought a small dining table for sixty rupees, to make his Australian guest comfortable. Until then the family used to have their meals, sitting cross-legged on the floor and to expect their guest also to do the same before she had been trained in some elementary Yoga, did not seem very right!

But it appears that even without any Yoga lessons, Claudia managed magnificently with their Indian style squatting toilet without the need for any modifications to it which certainly would have cost the family much more than their new dining table! During that visit, Shama Rao took his guest and her friends around the city and its surroundings in an Ambassador car which was then the best limousine that any guest could be offered. He even arranged horse riding classes for her and all her friends every morning at the Mounted Company through his good contacts with the Commandant, Capt. Krishna, who was gracious enough to allow them this opportunity completely free of cost.

In those days this princely pastime came at a princely sum of two rupees for an hour-long ride! Claudia soon became a student exchange coordinator and she visited Mysore a few more times, retaining her connection with Shama Rao’s family and staying with them. But on all these occasions, she thankfully had the comfort of not only dining at a much larger table but also the convenience of using a      western style toilet!

40 COMMENTS ON THIS POST To “Of American Dollars, Indian Rupees and Australian Pineapples!”