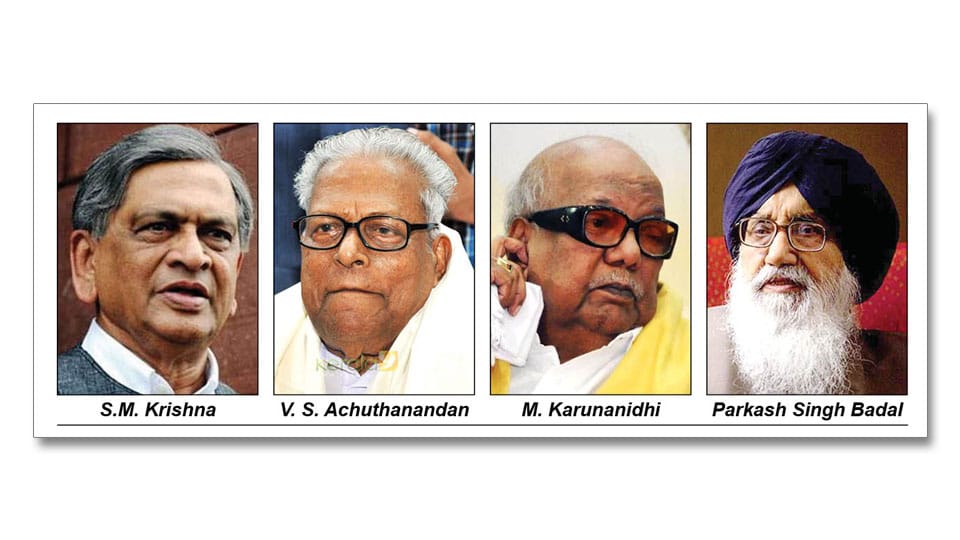 Our former Chief Minister B.S. Yeddyurappa, at his Party’s ‘Parivartana Yatra’ said that though he was 76- years-old, with the support of people and God he would complete the 84-day Yatra on Feb. 4 in Bengaluru. With that Yeddy would have covered 219 Constituencies in the State, visited 29 of 30 districts in Karnataka and travelled over 10,500 kilometres! Remarkable for a 76-year-old man! Age, truly seems like just a number to our Yeddy or is it?

Just last year the Karnataka BJP went into panic mode when Yeddyurappa’s supporters on his birthday published advertisements in the paper wishing their leader a happy 75th.  Before more advertisements could be published supporters were ordered to ensure that Yeddy’s age was mentioned as 74 years and not 75!

It left many perplexed. Was 75 an unlucky number? Well, in BJP 75 can sometimes be an unlucky number. It seems, Yeddy camp was worried that since Prime Minister Narendra Modi had put in place a rule that leaders above the age of 75 years should not hold any administrative posts, their leader would not be made the Karnataka CM candidate for 2018 Assembly election.  But then they realised that this 75 age bar was only for the likes of L.K. Advani and did not apply to State leaders who could get BJP votes. So now Yeddy boldly proclaims he is 76.

But what keeps our senior politicians going on and on and on? No, it’s not energizer battery nor is it yoga and it’s definitely not a sense of service. It seems, the most effective anti-aging agent is hunger. Hunger for Power. The quest for power, to remain in power and playing power politics is the secret to a long active life.  Because the average life expectancy in India is 68.5 years and most of our political leaders are far beyond that.

It is because of this obsession with power that India, one of the youngest nations in the world, has the oldest leaders in Parliament.  According to a report, the youngest MP is 29 (Dushyant Chautala) and oldest is 89 (L.K. Advani) which makes the median age of MPs 59. That’s double the median age of India’s population which is just 24! Over 65% of Indians are under the age of 35 but only 10 percent of the MPs are from this age group. Meanwhile, almost 10 percent of the seats are occupied by MPs older than 71 years and their population is just 2.4 per cent in the nation!

Yes, indeed experience matters but how progressive will New India be if the new generation has to live by the rules set by an older one. In that sense, India may be a democracy but more appropriately we are a ‘gerontocracy’ — the word means a nation or people governed by old people. In fact, this 16th Lok Sabha is the oldest in the history of India.

How do older MPs perform in Parliament? Not so well as they ask just 10 percent of the questions. But that changes dramatically when it comes to regional politics.

In our State itself we have 83-year-old former Prime Minister H.D. Deve Gowda, who is going to be the prime mover this Assembly election. We have the 85-year-old former Chief Minister S.M. Krishna, who just joined the BJP after he was sidelined in Congress. Now we have Yeddy at the age of 76 vying to be CM. In Kerala, we have V. S.  Achuthanandan, who is 94. In Tamil Nadu, we have wheelchair-bound M. Karunanidhi who is 92. In Punjab, we have Parkash Singh Badal who is 90. In Assam,  there is Tarun Gogoi politicking at 80. In Jammu, we have Farooq Abdullah going strong at 80 and the list can go on. Now, a government employee is asked to retire at 60, why not a politician?

We wish our leaders took the example of Nelson Mandela, who voluntarily demitted his Office as the President of South Africa. But very few politicians can let go of power.

Power is intoxicating and once experienced at a political level it is hard to let go. How can a life-long politician lead a normal insignificant civilian life when they have experienced a lifetime of industrialists, Police and bureaucrats bowing before them? That is why old politicians who can’t be in power take the proxy route by making politicians out of their kith and kin.

They say as you get older you want people to remember you for you deeds, good deeds.  But a politician as he gets older is not worried about legacy, he is worried about dynasty.

In some cases, senior politicians go out with a “bang” or to put it crudely with a “happy ending” like N.D Tiwari, who at the age of 86, instead of serving the people as the Governor, was caught getting serviced by three young girls.

Hindu philosophy divides human lifespan into four stages: Brahmacharya the Student Stage; Grihastha the Householder Stage; Vanaprastha the Hermit Stage; Sanyasa the Wandering Ascetic Stage. Unfortunately, most of our politicians never went past Grihastha…they instead created their own stage called ‘Adhikara – astha’ (political power stage). A stage they plan to remain in till their last breath leaving young India breathless.

In Black & White Politicians Vikram Muthanna
Krupakar, Senani inaugurate photo expo
Once in a Blue Moon: How Mysuru is set to witness the rare celestial event

2 COMMENTS ON THIS POST To “Old Netas in Young India”