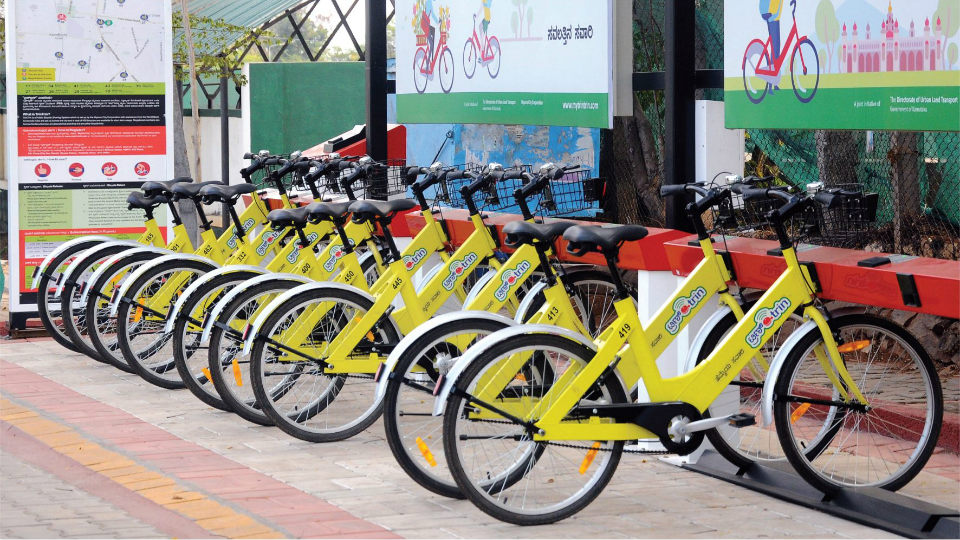 Mysuru: The Public Bicycle Sharing (PBS) System, the first-of-its-kind in the country introduced in the city, has become a big success. Hence, more docking stations have been planned and the District Administration has decided to ring in a few changes in the tariff for renting of the bicycles.

Deputy Commissioner D. Randeep chairing a meeting on PBS with Mysuru City Corporation officials and the Directorate of Urban Land Transport (DULT), at the Jaladarshini Guest House, here yesterday, said that the experiment on bicycle sharing system introduced three months ago is ending this month. Hence, there will be a few changes in the tariff.

This rule will come into force from Nov.20 for new registrations and for renewal of registrations. From Dec.1, it will include all the members, said the officials.

At present, there are 49 docking stations and there are plans to add ten more due to the demand from the public and the Corporators. However, though a decision was taken to set up the stations on Devaraj Urs Road, Gun House Circle and near Kamakshi Hospital, due to some reasons, it has not been possible to implement. Hence, alternative places must be identified, Randeep directed the officials.

In Gokulam extension, there are a lot of Yoga centres and an influx of foreigners. Since bicycling is also a form of exercise many of them use it. Two docking stations can be set up there. Similarly, there is demand from the Corporators and the public in K.R. and Narasimharaja Constituencies for the docking stations, said the project implementing officers.

MCC Commissioner G. Jagadeesha said that just like the bicycle track near the Administrative Training Institute (ATI) on Lalitha Mahal Palace Road, such tracks will be built on KRS Road near Akashvani and on JLB Road near MUDA office. The tracks will be of 1.5 metre width and will be painted indicating bicycle safe line.

Randeep, reacting to this idea, said that in future when the MCC, PWD or MUDA develops roads, then they will be asked to plan for bicycle tracks too. DULT Special Officer N. Murali Krishna, PBS Nodal Officer Javaregowda and others were present.

There are 7,266 registered bicycle sharing Trin Trin members till now. In the 49 docking stations, there are 450 bicycles shared. In a day, nearly 900 people use the bicycles. So far Rs.27.45 lakh has been collected through registration and membership renewal.

READ ALSO  ID cards for all Government staff by Dec. 31

Some time it will be difficult for bicycle users to dock them at the docking stations and there could be lack of space for building docking stations. These two problems could be solved by using the most modern technology by using dockless Geo-fencing. The bicycle users can lock and unlock bicycles using mobile app. Deputy Commissioner D. Randeep, reacting to this suggestion by the officers, asked them to identify a place for this novel idea.

DC D. Randeep Trin Trin
83rd All India Kannada Sahitya Sammelana: Public too can savour dishes along with litterateurs and delegates at the Meet
Amidst standoff with Doctors, Minister announces free healthcare for all