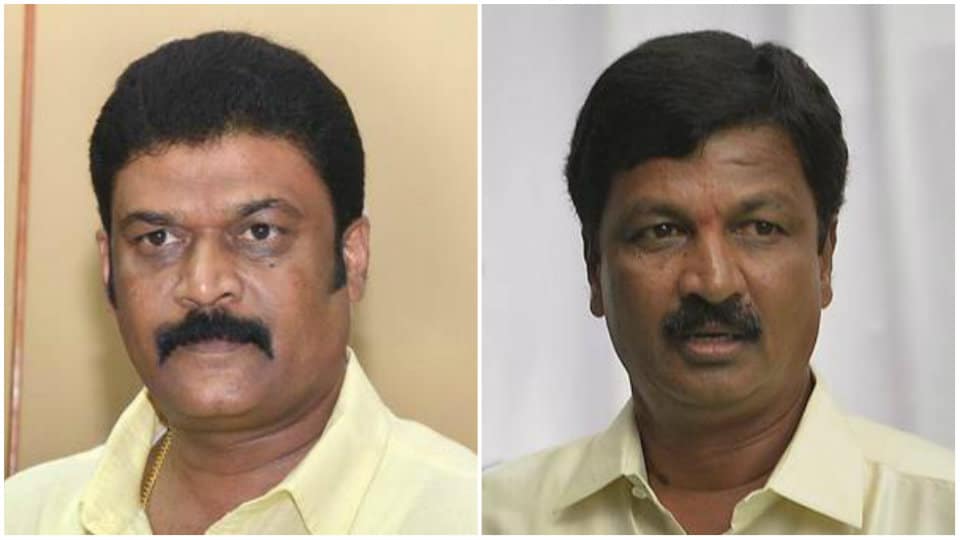 Bengaluru: Even before the JD(S)-Congress Coalition Government could heave a sigh of relief that dissidence in both camps had been contained, two Congress MLAs resigned on Monday, setting alarm bells ringing for the ruling coalition.

Just hours after Vijayanagar-Hospet MLA Anand Singh dropped a bomb on the coalition by resigning, Gokak Congress MLA Ramesh Jarkiholi too submitted his resignation, casting fresh doubts about the future of the Government.

Delivering a double blow to the Government, the two MLAs, who are miffed over several issues including non-inclusion in the Cabinet, resigned barely 10 days ahead of the Budget Session of the Karnataka Assembly, which is scheduled to start from July 12.

After Umesh Jadhav of Chincholi, who quit days before the Lok Sabha Polls, Anand Singh and Ramesh Jarkiholi have taken the total number of resignations from the Congress to three.

While Anand Singh submitted his resignation in the morning, Ramesh quit by sending a handwritten resignation letter to the Speaker’s office. Ramesh’s resignation ended months of speculation about when he will quit, after he was dropped from the coalition Cabinet in late last year’s reshuffle.

The developments have come at a time when Chief Minister H.D. Kumaraswamy is on a tour of USA. Following the resignation of the Congress MLAs, Kumaraswamy took to twitter to once again accuse the BJP of attempting to topple the Government.

Claiming that he was keenly observing all the developments taking place in the State while being in USA, Kumaraswamy maintained that the BJP’s dream of toppling the Government will only remain a dream.

With two of its MLAs resigning within hours of each other on Monday, the Congress went into a scramble and held a series of meetings to work out strategies for keeping its flock together.

CLP leader Siddharamaiah, KPCC President Dinesh Gundu Rao, Water Resources Minister D.K. Shivakumar and many other Senior Congress leaders went into a huddle to discuss the steps to be taken for saving the Coalition Government.

As a measure to tide over the crisis, CLP leader and former CM Siddharamaiah has convened a Congress Legislature Party Meeting at his Bengaluru residence on Wednesday and has asked all the party Legislators to attend.

Meanwhile, Water Resources Minister D.K. Shivakumar, who is widely known as a trouble-shooter for the Congress, has said that he was shocked by the sudden resignation of Anand Singh.

Speaking to press persons in Bengaluru on Monday, Shivakumar said that he could not believe that Anand Singh has quit.

Maintaining that Singh was not a person who would quit the Congress, Shivakumar said that he may have quit the Assembly for his own reasons.

“I will speak to Anand Singh and try to convince him to withdraw his resignation. Although some Congress Legislators may have quit, there is no threat to the Coalition Government,”                             he remarked.

Even as two Congress Legislators quit on Monday sending shock waves in Congress circles, KPCC President Dinesh Gundu Rao has said that the Congress is ready for a reverse operation to poach BJP MLAs. Accusing BJP of engineering the resignations, Dinesh alleged that the BJP is using Central agencies such as CBI, IT and ED to threaten the Coalition MLAs.

Asserting that there is no threat to the Coalition Government, the KPCC President warned the BJP that the Congress would hit back if the BJP continued its efforts to topple the Coalition Govt., which has a majority in the Assembly.

He further said that he has not been able to understand why Anand Singh quit the Assembly all of a sudden.

Meanwhile, Dinesh Gundu Rao is learnt to have left for a 10-day tour of Europe late last night, even as the Coalition Government is on a rocky boat with the resignation of two Congress MLAs on Monday.